Posted on 31st January 2016 by Julie and David Thomson in General News. 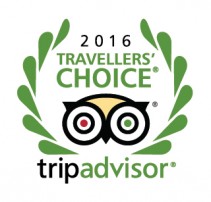 There is nothing like starting the year on a high and that has been the case for us with January being rewarding and interesting. There has been plenty going on to keep us busy...

And The Winner is…

For those who follow us on Facebook you will have seen that we are delighted to report that for the second year running we have been selected as winner of the TripAdvisor Travellers' Choice ™ 2016 in the bed and breakfast category. It means we are in the top 1% and it is the highest honour awarded by TripAdvisor. We are the only establishment to be awarded this honour on The Somme. Outstanding service, value and quality are the criteria to win the Travellers' Choice award. Thank you to our guests from all over the world who have left such lovely reviews which led to us being recognised in this way. It warms our hearts to know what we do is appreciated. The story has been picked up by our local paper the Courrier Picard who interviewed us at No.fifty6 and published an article on 29 January.  The news has been welcomed by our neighbours and local friends.

Earlier in January we were approached by a French film production company who are making a film about The Battle of The Somme using a marionette called Celestin. We were asked to help with some historical aspects at the Glory Hole in La Boisselle. For a cold couple of days in early January we spent an interesting time filming.  As there are no living witnesses to the Somme conflict, the premise is that Celestin the puppet has been dug up from a forgotten trench after a 100 years and revisits various sites where he was 100 years ago. He acts as journalist, storyteller and historian, aided by people who know the area to help tell the stories. Celestin is a sort of ghost from the past. David was filmed with Celestin to help tell the story of The Glory Hole and they also filmed at Lochnagar.  Celestin asked questions and David answered, even showing Celestin trench maps of the area. The attention to detail, filming techniques and the artistry of the hand-made marionette were amazing to see in action. The story was again covered by The Courrier Picard and we will of course keep you updated about the progress of the film. 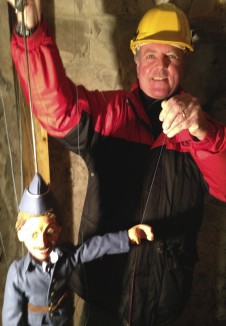 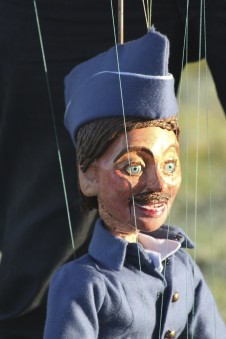 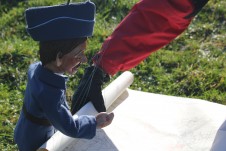 As we enter 2016 thoughts of course have been turning to the centenary commemorations taking place this summer. Our regional TV station Picardie 3 ran a week long series about how the region is preparing for the centenary, interviewing local businesses  - accommodation providers, restaurants, places to see and the tourist office. The TV crew came to No.fifty6 and filmed us for a short segment.  The short clip can be viewed on the play again feature of the programme 19/20, the episode for 18th January. From the link below click on the 19/20  programme for 18/1/2016. We appear about 17.25 minutes in.

With all this media attention David has taken to wearing dark glasses when he goes out. What we are pleased about is that the local community is really engaging in the events unfolding here in this centenary year.

We are getting one or 2 enquiries a day from people looking for accommodation for 1st July.  We know of nowhere locally with accommodation so rooms will  have to be taken further afield. We will continue to up date as news of the centenary becomes available.

There is still time to get a ticket for the 07.28am 1st July commemoration at Lochnagar. Ticket applications must close on 15th February and can be made via the Lochnagar website.

We understand the official commemoration for Delville Wood will be on Sunday 10th July this year (though the battle started 100 years ago a few days later on 15th July).

To mark the 141 day duration of the Battle of The Somme, The Royal British Legion will be hosting a daily service of commemoration at the Thiepval Memorial, from 2 July to 17 November 2016 at noon. We think this will be a wonderful addition for the commemorations as so many families will be coming out to pay their respects to family members who died during the various dates of the battle. While you can just turn up to the noon services, if you would like to lay a wreath or take an active role in a ceremony, then you can apply via a special section of the Royal British legion website:

On 18th January there was “sod turning ceremony” at Villers Bretonneux to mark the commencement of works for the new Sir John Monash Centre. The event was attended by the Veterans Affairs Minister Stuart Robert and Australian ambassador Stephen Brady

Mr Robert said the new centre would be a focal point for the existing Australian Remembrance Trail and provide "a lasting international legacy from the centenary of Anzac". The multi $ million centre will be complete for Anzac Day 2018.

Despite not liking the cold (even though they have a NASA inspired thermal jacket on their coop), our chickens continue to do well and we still get 5-6 eggs per day from our 6 girls. We were pleased to hear from guest Tony that his hens have also been known to wonder off to a neighbour’s garden! (We love to hear other hen stories). Joan escaped into the backfield last week but we managed to get her back. Where there is something to be inquisitive about Joan will be there – She even knocked on the patio door when we were being interviewed by the TV crew, wanting her own starring role. She just had to make do with being an eggs-tra! 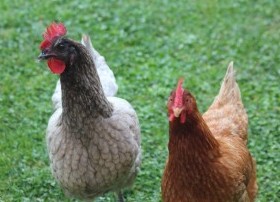 Fantastic recognition for a great couple at a great b&b. Looking forward to seeing you both later this year
All the best
Tim

Bravo Zulu (Excellent in Navy talk) for the award. We trust the film crew and their leading actor enjoyed their stay as much as we did with you !
Say Hi (or is Oz G'day) to the girls out back and tell them to increase production !! OSD Weathers for the "Weatherall Boys"

Congratulations to you both, very well deserved. I've never been looked after better than when I stayed with you last year.
Thank you and all the best 'til next time,
Dave Mollington.

A thoroughly well deserved award. Genuine warm people who embrace the area and the people who choose to visit. A journey to the Somme simply means 'No 56' - congratulations.

Well done Julie and David, well deserved. Looking forward to our annual trip so see you then.
Love Sheila and George.
.

Joan the wanderer. I feel a song coming on. Congrats on the award. Well deserved

Many congratulations on your award. Very well deserved. But I knew you and your business were destined for greater things. You work so hard to make your visitors welcome and at home and you provide a wonderful friendly environment especially when evening meal is taken and we all sit round the table chewing the cud and swapping experiences.

Good luck to you both,

Well done you two. Congratulations on the award. Couldn't happen to a nicer couple.
Looking forward to seeing you in June/July.

Much love to both,
Brenda and Tim