Are the French Falling out of Love with The Baguette?

Posted on 3rd August 2013 by Julie and David Thomson in French News. 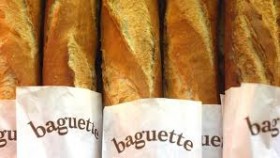 Think of France...what do you imagine...perhaps wine, countryside, wonderful cheese and of course the ubiquitous baguette. But is all that changing? The French, it seems, are falling out of love. Not with free health care, or short workweeks, or long holidays in August. But with bread.

The average Frenchman these days eats only half a baguette a day compared with almost a whole baguette in 1970 and more than three in 1900. Women, still the main shoppers in most families, eat about a third less than men, and young people almost 30 percent less than a decade ago.

The decline is so worrisome that Observatoire du Pain, the bakers’ and millers’ lobby, started a nationwide campaign in June that champions bread as promoting good health, good conversation and French civilization.

“Coucou, tu as pris le pain?” (“Hi there, have you picked up the bread?”) is the campaign’s slogan. Modeled on the American advertising campaign “Got Milk?” the bread slogan was plastered on billboards and inscribed on bread bags in 130 cities around the country.

“Eating habits are changing,” said Bernard Valluis, a co-president of the lobby. “People are too busy or work too late to go to the bakery. Teenagers are skipping breakfast. Now when you see the word ‘coucou,’ we want it to be a reflex for consumers to say to themselves, ‘Ah, I have to buy bread today.' ”

The campaign’s Web site, www.tuasprislepain.fr, explains that “France is a ‘civilization of bread’ and this food is part of the traditional meal ‘à la française.' ”

Bread is described as healthy and useful in avoiding weight gain.

If people on diets want “to avoid giving in to something with fat and sugar, bread is there,” it says. “Its satiating effect allows you to wait for the next meal.”

Then there is the congeniality effect: “Remember that buying fresh bread on the way home is a simple way of showing loved ones that you have thought about them and of giving them pleasure during the day.”

At 50 Euro cents, the basic baguette is one of the country’s cheapest food staples. Ten billion baguettes are sold every year in France.

This article first appeared in the New York Times and the full article can be found here.

For those visiting No.fifty6 we are lucky to have a Depot de Pain just across the road run by the amazing 85 year old Mme. Cosette.  We are pleased to say there is no sign of a decline in bread consumption in La Boisselle.  Not surprising as the local bread is just so good...as are the croissants....pain au chocolat.....

Mmmmmm yes the baguettes are so much better in France. I remember someone driving across the road to buy ours. Hee Hee

On our recent trip to the Somme, staying at no56 La Boisselle, the memory of the packed lunch we had made each day, was one of the highlights of our trips out, when we stopped for lunch ,and ate the wonderful Baguettes filled with many different fillings, I have not tasted a baguette as good here in England.Thank you .
Gerald Abbotts Oxfordshire.

baguettes are so different in France and so much better. I look forward to every trip as much for the bread as anything.

How appropriate for the Somme as the lads in the trenches used to say that "if bread is the staff of life, then life on the staff must be one long loaf".