August News from No.fifty6 - Not forgotten, Art, Airshows and Renos

Posted on 31st August 2017 by Julie and David Thomson in General News. 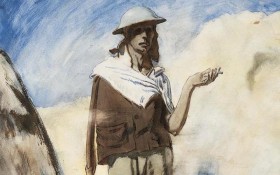 August is always a strange month in France. It is time of “Les Vacances” when most French families take their holidays. Businesses shut down, including hotels and restaurants, things are quieter. It is also a time when we welcome families to The Somme as the UK schools are on holiday too. At times it seems only the farmers are working…crops brought in, hay bales rolled, ground prepared for the next seeding. The constant cycle of agriculture. This month too has been hot and dry, with a mini heatwave ending in a storm to end the month. However, we have not been quiet, there is plenty to report from No.fifty6 and there is never a dull moment here.

Last month we reported on Karsten Lund’s visit from Denmark as he traced the war of his grandfathers’ who served with the German Army. Karsten on his return to Denmark sent us photos of his great grandfather Karl Christian Adolphsen who served in the 5th Company/84 Reserve Infantry Regiment and was wounded in the face. The photo of Karl as an older man seems to tell a thousand stories. 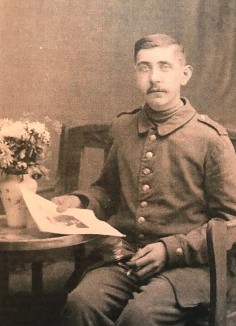 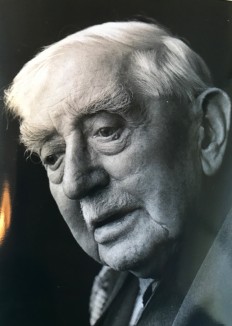 Josie and Pete visited us from Windsor. They have visited several times and love the history here which prompted them to research their own family. Josie is from the Isle of Wight and she has a great uncle buried there - Albert Henry Locke was a gunner with the Royal Field Artillery. He died after the war in September 1920  in County Kildare after he was stationed at the Curragh. His body was returned to the Isle of Wight in a lead coffin due to the illness he had contracted, and he is buried in Carisbrooke Cemetery. All the family has is a letter from his commanding officer sent home to his parents. We were able to answer some of the unnswered questions Josie had.

Gerry Moore is a history teacher who has made many visits to The Western Front. He, his brother and 3 cousins made the journey from Donegal to visit the Somme on a family pilgrimage. Their Great Uncle had made the same journey from the beauty of Donegal to The Somme but he never went back having paid the ultimate price. Anthony Gallagher served with the 1st Battalion Royal Enniskillen Fusiliers and died on 1st July 1916. He is remembered on the Thiepval Memorial. Though a poignant visit for the family we had many lively chats too and learned about beautiful Donegal, the sea, and the family oyster business producing some of the best oysters in the world!

Jo Bayley from Hertfordshire is also a history teacher and brings school trips to the Western Front regularly. In August, Jo stayed with us for the second time along with her mother and niece as they too were on a family pilgrimage, researching family members of the Great War. In October, Jo will be returning to the Westrn Front on a large family trip she is organising with many family members coming from as far as New Zealand to make this special family trip. Jo used her August visit as a recce for October. It is wonderful to see these family connections being made.

Ian Stone came at the end of the month with his partner Pippa and children Aged 8 and 2. Ian’s great uncle William Hoare served with the 15th and 10th Royal Welsh Fusiliers (RWF). With our help, Ian learned of the journey William had made from Camberwell, London, volunteering for the London Welsh Battalion (as the 15th Royal Welsh Fusiliers were known) even though he had no Welsh family connections. Having survived Mametz wood in July 1916 William was moved to the 10th RWF and was part of the muddy, cold, misty attack on Serre on 13 November 1916. Gravely wounded in the face and chest, William was taken to No.4 Casualty Clearing Station in Varennes where he died and is buried in a long row of those who also died on 13th and 14th November 1916. His mother was sent a letter from the Sister of the Casualty Clearing Station. The family still have the neatly written letter, along with William’s belt, bible and medals.

In April this year Aimi Williams and her husband Gary and 2 children visited us to learn about the history as young Alfie is mad about history. Inspired by their visit they found out about a Great Uncle who died in the War. Aimi emailed us the details and asked if he had been anywhere near here. We discovered Frederick Patrick was a Pioneer with the 5th Northampton Regiment and he died on 10th July 1916. Where? – Ovillers. Where is he buried? – 2 miles down the road at Bapaume Post Cemetery. Small world. Alfie will be returning at some point to learn more and pay his respects. Small world huh?

We will remember them.

Ivar and his delightful daughter Dagbjort visited from Iceland  - our first Icelandic guests. Sadly their luggage did not make it through Brussels airport with them, caught up in a wildcat strike, so they arrived exhausted and "sans bagages". A quick meal, some toiletries and overnight clothes sorted, this lovely duo soon relaxed and enjoyed their time on The Somme. They fitted in some essential clothes shopping as still no luggage by the time they left us, then headed off to discover Normandy and on to Luxembourg. An email from Dagbjort arrived today and they still have no luggage…hoping to be reunited with it when they return to Brussels at the end of their holiday.

On Sunday 6th August the aspiring composer George Butterworth was remembered at a ceremony in Pozieres near Butterworth Trench where he was killed. George has no known grave and is remembered on the Thiepval Memorial. Each year George’s nephew Hugh Butterworth has made the journey to Pozieres from Devon, along with other members of the Butterworth family. In a short service each year, George’s life and work is remembered – his music played and there is a Morris dance as George was an avid English folk dancer. Hugh, now in his late 80s, says it will be the last time he visits. He presented gifts to the mayors of Pozieres and Contalmaison for their remembrance of George each year. That evening, we walked to Lochnagar Crater to watch the sunset. There we met Hugh. Lost in his thoughts.  He regaled us of stories of his youth and how much remembrance of George had meant to him, along with how important it was that the people of Pozieres had taken George to their hearts and ensured he, along with so many others are not forgotten. Hugh’s words, spoken so eloquently in the special place that is Lochnagar, as the sun set, will stay with us a long time. 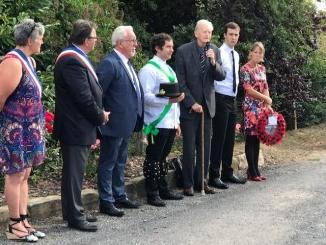 Orpen was an Irish artist who produced some stunning landscapes and portraits. In 1917 he was sent by the British Army to the Western Front as an official war artist and he stayed for a year. 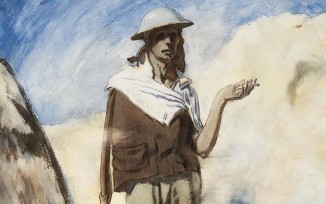 From this November 11th the National Gallery of Ireland in Dublin will be holding an exhibition of some of Orpen’s work. This month the exhibition’s curator, Donal and contemporary Irish artist Garrett Phelan stayed with us while they visited and collected recordings at the places Orpen had painted on the Somme including Lochnagar, Thiepval Wood and the Butte de Warlencourt. The exhibition will have new work by Garrett Phelan in the exhibition space with Orpen’s landscapes. Having seen copies of the paintings, which are stunningly beautiful despite the war torn landscape, we think the centenary exhibition will be a fantastic opportunity to see Orpen’s works which have not been on display for some time.

How excited were we last Sunday? Like 2 kids in a candy store we went to the Albert Air Show. It is 7 years since Albert had an airshow and it is hoped it will once again become a regular event. On a very hot, sunny day, over 10,000 people attended the show at Albert Airport. The French Patrouille (The French Red Arrows) with their Alphajets were there along with the Belgian Air Force and the RAF. Too many planes to mention but the deafening Mirage was a highlight and the RAF brought a Eurofighter. Our highlight of the show was very much now grounded. A special exhibition about the Anglo-French Concorde. We met and chatted with Monsieur Jacky Ramon, one of the last pilots to fly Concorde, and a Concorde design engineer. They maintain, like us, it was one of the most beautiful planes ever built. We even got to bring a bit of Concorde home with us. No need for Christmas presents now. 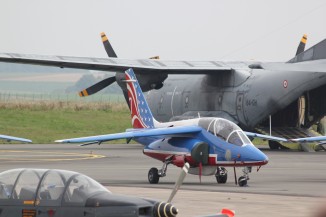 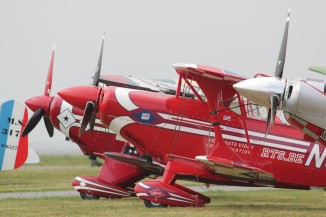 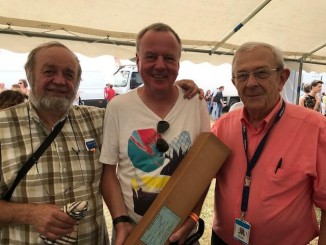 At last we have made some really good progress this month. Gregory our builder is back after his collarbone operation and he is really cracking on (well not cracking his bones we hope). Gregory engaged a fantastic electrician who at long last was able to solve the problem of our very complex agricultural 3-phase electrics which were the feed to the renovated area. He said it was one of the most complex things he had done but we now have no overhead cable – ta-dah!! and new wiring throughout. So much better.  The back wall for the new dining room area has been built and installation of that room is scheduled for mid September. It is lovely to see real progress now. However we still await the kitchen worktop that was ordered in April… 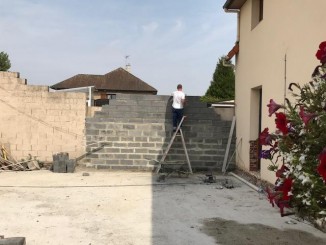 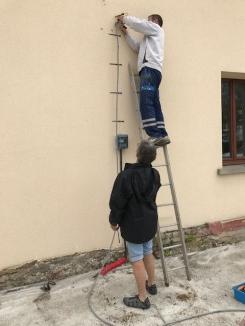 Our little menagerie is doing fine. The 4 chicken girls have been a delight this month, with guests loving their penchant for grapes. Hope, the foal is growing like topsy but still soft as butter. Sausage and Mash the rabbits are fine – though moulting and requiring daily brushing! We even have a female pheasant who visits the garden but we have yet to capture her on film. 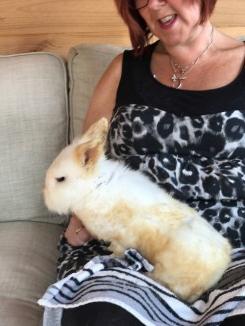 As always, great to hear your news, have very fond memories of our few days with you in 2016. Will visit you again, this time I'll bring the Wife!

Another great newsletter. How do you cram in all the activities and run no.56. Hope to see you both again this year.

Yet again a wonderful read. Great to read all the personal stories. Looking forward to our November trip. Glad the girls and buns are doing well and Hope must be growing like a weed by now!! Still remember the shock of looking out the bathroom window that morning and thinking horses don't have 8 legs!!! Love to you all. Miss you x

Delighted to learn that Alfie & his Family (whom I met during my stay in April), have discovered a personal link to allow them to continue their interest.

Very much look forward to seeing you both again soon.

Great to read the news. Missing you all. xx

What a wonderful report of a busy time. Always a joy to stay with you.

Great Newsletter and a joy to see that the menagerie is growing! How to see you soon.

Lovely to read your newsletter, reminds us of our fab stay with you. Looking forward to next year! X

Thanks again for a wonderful stay and helping me finding the right area guys. Really meant alot to me and thanks for sharing

Always look forward to your monthly news letter, Wonderful memories of our stays with you, hope to visit you again soon..

Terry and Graham really enjoy your monthly newsletter, keep up the good work.

As always, a "must read" and it never disappoints. Thanks a lot.

9 hours ago we said:
Australia Day. The Australian National Memorial at Villers Bretonneux. Remembering those who came from a land of ho… https://t.co/9q5qsNFmX6