Posted on 31st August 2015 by Julie and David Thomson in General News.

Over the month the landscape has changed. The farmers have been busy harvesting crops and it is only the maize standing tall which remains. Hay bales scatter the fields and it has been a dry month apart from some heavy rain last week. How different did the landscape look 100 years ago?

The Arrival of British Troops

Towards the end of July/beginning of August in 1915 the British Army arrived on The Somme to relieve the French troops who had fought and died on the ground here so bravely.  Exactly 100 year ago the British were now responsible for this sector which unbeknown to them at that time, the name of The Somme would resonate forever. As the Black Watch regiment took over from the Bretons at the base of the village of La Boisselle it is reputed that the Bretons said – “many brave men have died here, do not cede one metre of land. To death or glory.” And hence the area became known as The Glory Hole. The Saltire now flies over the Glory Hole, replacing the Breton flag that has been marking the Breton soldiers. As we travel around the Somme, walking, learning, taking photographs, we come across headstones of soldiers who died early on in the Somme campaign. They were not to know the horrors of July to November 1916 but they too met untimely deaths in the summer of 1915. One such young lad was Private Isaac Albert Laud of the Norfolk Regiment killed on 9 August 1915 aged just 16 and buried in Norfolk Cemetery. His was the first burial by the Norfolks in that cemetery and hence it took their name. We will continue to highlight those who died on The Somme in 1915 and early 1916 on our Facebook page. We will remember them 100 years on. 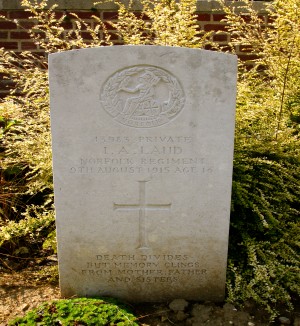 Recent guest to No.fifty6 was Michael Light, who has visited The Somme many times and he always pays respects to his great grandfather Richard Green who is buried in Point 110 New Cemetery at Fricourt. Richard was a Private in the 24th Battalion Manchester Regiment, The regiment were known as The Oldham Pals and were written about in the book Cotton Town Comrades. Richard was killed in action on 26th February 1916 aged 32. He was a cotton piercer by trade from Royton and left behind widow Elizabeth and 3 children Amy, Ethel and Tom. Michael Light visits his great grandfather's grave on each Somme visit, lays a cross of remembrance and sits at Point 110 New Cemetery in a moment's reflection. Michael says it is one of his favourite places on the Somme and the beautiful landscape is a fitting resting place for his forefather.  Rest in peace Richard. 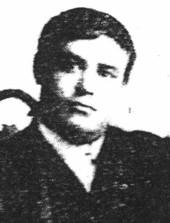 For those who have visited Lochnagar Crater recently or have read our blog you will be aware of the memorial plaques that are being put in place on the pathway at Lochnagar. For a £25 donation you can sponsor a plaque for a veteran of the Great War who you wish to remember.  Many guests have sponsored a plaque for a relative in this way. The next batch of plaques are being installed by the Friends of Lochnagar between 6th-13th September 2015, so if you have ordered a plaque in recent months, it should be installed soon.  Many of our guests comment on what a thought provoking and apt addition to the crater these plaques make.

We do love our books, and while we have a library of many First Word War titles which guests are welcome to browse, a question we get asked a lot is “What is your favourite Somme book?” This is hard to answer as it depends on the information we want or the perspective of the war we want to read about.  Some titles do come up again and again and we recommend these to guests who wish to further their reading. We have been talking to the publishers Pen and Sword and we now offer a few titles for sale at No.fifty6 for guests to buy and take away with them. Books such as Andrew Rawson’s The Somme Campaign, and Martin Middlebrook’s Guide to the Somme Battlefields. There is nothing like losing yourself in a good book and discovering new things. The books are offered at a discount to the RRP. 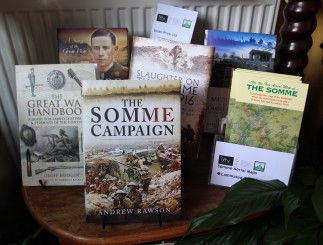 Through guest Tim Pritchard –Barrett who is an ex Welsh Guardsman himself, we have been notified that on 11 September 2015 at 11am the remains of an unknown Welsh Guardsman will be reburied with honours at Lesboeufs Guards Cemetery (between Ginchy and Flers). The Guards’ remains were discovered in Ginchy and despite extensive efforts to identify him, his name remains unknown, though he was identified through his shoulder titles.

We hope to attend the reburial. 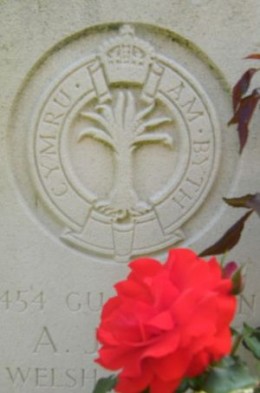 Two other soldiers whose remains have been found will be reburied on 9 September. The first, an unknown soldier of an unknown regiment will be reburied at Vieille-Chapelle New Military Cemetery, La Couture near Arras. The second an unknown World War 1 Officer of the Oxfordshire and Buckinghamshire Light Infantry will take place at H.A.C. Cemetery, Ecoust-St Mein, Nord-Pas de Calais.

Brigitte is no longer Broody (hooray) and the hens are laying eggs for breakfast each day. The lovely girls now have a chicken swing to exercise on – as if scratching around the garden wasn’t strenuous enough – and their fine form has been enticing a visitor the last couple of mornings. A cockerel from the village has been seen pacing up and down on the other side of our back fence, crowing his love serenade to our 6 beauties. We will have to keep an eye on our girls. We don’t want love-struck hens! 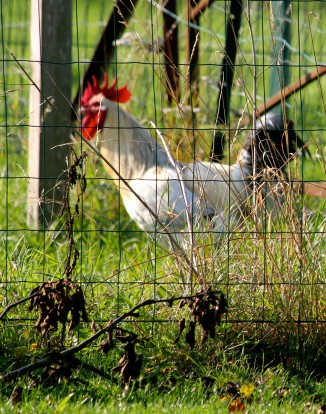 I have just read this comment see below and would love to get in touch with Donna if you have her email address or could pass mine on . Isaac Albert Laud was my second cousin, my father was named after him. Hoping to hear from you Pam Grice
Donna Jackson says:20 Sep at 10:43PMProbably surprising to get a comment after two years, but I've just found this page in a google search. Isaac Albert Laud was my great-uncle and I've been trying to find out more about him. One day I'll visit his grave, and hopefully I'll be able to stay at your B&B when I do! Thank you for remembering him.

Probably surprising to get a comment after two years, but I've just found this page in a google search. Isaac Albert Laud was my great-uncle and I've been trying to find out more about him. One day I'll visit his grave, and hopefully I'll be able to stay at your B&B when I do! Thank you for remembering him.

Yes! Keep an eye on those hens... they have been known to cause much a flurry once love struck... : -)

Thank you for the update. Always brings a lump to the throat, but news of Monsieur Coq brought a smile to my face. Will forward your newsletter to the others.

Hello to you both and it is always such a pleasure to read your updates that I wll be attentively following though out 2016.
My great uncle, Archie ,died at Bazentin on July 14th 1916 and I have to thank you both again and Terry and Mary for such a wonderfully informative and enjoyable visit - hope to make it back July 2016 ! Jane

Good to see my book, Somme Campaign, gets a mention. Of course No56 was where I was based during my research. See you in a couple of weeks for the Loos centenary.

Thanks for sending me your latest news update I look forward to them every month, keep up the good work.

Hi Anthony, we are fully booked for 1st July 2016 and have been for some time but would love to welcome you at another time.

I assume that you will have no vacancies for the period spanning the centenary commemorations next July 1st.
Seems I should have started looking for accommodation about two years ago, if not longer.

2 hours ago we said:
@JaneElRoberts Ah, we are there!