Posted on 30th May 2013 by Julie and David Thomson in General News.

Yesterday we caught up with the Help for Heroes Big Battlefield Bike Ride 2013.

Details of the event are:

The Big Battlefield Bike Ride is not only a tough physical challenge as the route covers over 350 miles across France but an emotional one too. It is about showing support for our wounded, it's about showing how much we recognize the sacrifice they have made, and crucially it is about raising as much money to support their recovery for life through the Help for Heroes charity.

Along the route the cyclists stop at various battlefield sites, both WW1, WW2 and older sites such as Agincourt.

Yesterday was the Somme leg of the event and we caught up with the 300 cyclists at Lochnagar Crater and Thiepval.   At Lochnagar there was a chance for the cyclists to hear about the events that happened there in 1916 from Dudley Giles, Battlefield Guide.  The cyclists we spoke too were emotionally awed by what they saw and heard.  The crater is looking more beautiful than ever after the recent Working Weekend maintenance by Friends of Lochnagar. 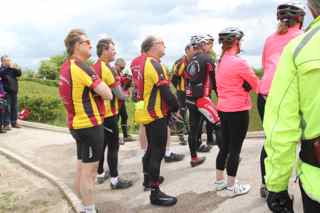 We had an opportunity to speak to the cyclists who had found the journey so far both physically and emotionally challenging. There were ex servicemen from many allied countries, many of them with severe injuries.

We also spoke to Paul Oldfield, historian and battlefield guide, a recent guest at No.fifty6, who is taking part in the ride – but has added a few hundred more miles to the route for himself as he started and will finish the race in his home county of Wiltshire. 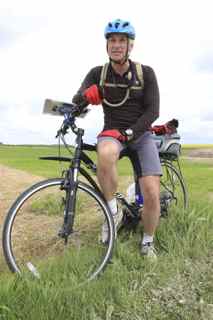 The route moved on to Thiepval where the “Pedaling Padre” – Roger Dawson (who is also cycling the event for the 4th time) led a short service on the Memorial. 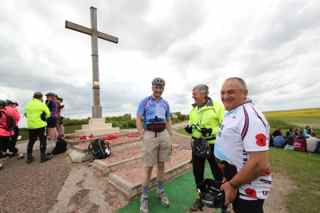 The cyclists were piped up to the memorial from the car park.  The exhortation was read, followed by The Last Post and a two-minute silence.  Wreaths were laid at the stone of remembrance, including one by Major Peter Norton, George Cross. 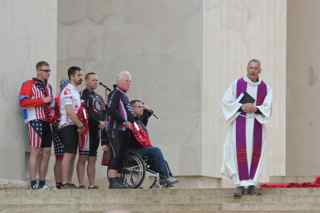 The cyclists were urged to cycle softly as they headed out towards Ulster Tower, as they would be cycling over soldiers who had fallen nearly 100 years ago.

We were incredibly moved by the courage and passion shown by the cyclists. Some had hand bikes as they had no legs or no use of their legs, some had no arms. Some had emotional scars which are not visible to the naked eye.

So we wish them well as they move on, ever closer towards the finish in London on Sunday, where they will travel down the Mall forming en masse the shape and colour of the Help for Heroes medal.

For more details or to donate go to 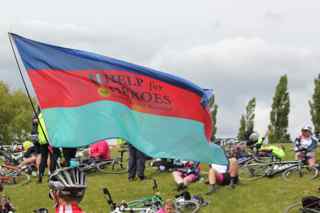