Posted on 25th June 2014 by Julie and David Thomson in General News. 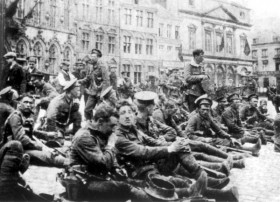 As one of the first major national events to start the Centenary commemorations of 2014-2018, The Western Front Association will commemorate the deployment of the British Expeditionary Force to France. The commemoration is about remembering the physical movement to France of thousands of servicemen and horses with their associated equipment and all those who made the move possible. The deployment of August 1914 was carried out in two parts: the Ground Force and the first British deployment of an Air Force.

In a series of transport related events using motorbikes, a horsedrawn wagon, vehicles and aircraft we shall be remembering the first units transported to France from 9 August 1914 by land, sea and air. To mark the one hundred year anniversary of this movement to France, The Western Front Association is organising commemorative journeys on 10, 11, 12 and 13 August to represent the movement of the Land Force and the Air Force to France. The journeys will culminate on the afternoon of 13 August 2014 with a Service of Remembrance to be held at the Commonwealth War Graves Commission Faubourg d'Amiens Cemetery, Arras Flying Services Memorial and Arras Memorial, Arras, France.

The events are open to WFA members, family and friends to attend. The public will also be most welcome to join in these Centenary commemoration events.

Further details can be found at: