Posted on 28th February 2019 by Julie and David Thomson in General News. 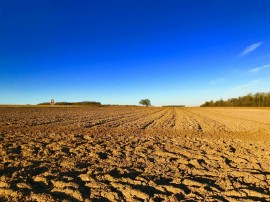 After the snows in January and a chilly start to February, most of the month has been gloriously sunny, dry and with record February temperatures by day between 17-20 degrees regularly. The farmers have been busy ploughing and seeding, the birds are active in the trees and the trees are beginning to burst into new life. We even managed a barefoot walk by the sea at Berck –Plage this week. Spring has come early. The end of the month sees the weather change to wetter, but still reasonably mild  - but we know winter may not be over yet. The perfect weather has seen guests come and explore and there has been plenty going on here from meetings to wayward ducks.

Our friend and proprietor of The Lochnagar Crater, Richard Dunning, visited on 1st February before an evening at the Prefecture in Amiens. Richard had been invited to the ‘World War I Centenary Medal Ceremony and the opening of the exhibition "Traces of the Great War."

The Centenary Medals were awarded for services to remembrance during the centenary of the Great War and Richard was one of the recipients.

M. Laurent Somon, Président of the Conseil Departmental made the awards. He paid particular tribute to Richard’s many years of dedication and hard work in making Lochnagar such a special experience for visitors. We are so pleased Richard has been honoured in this way by the French, having been awarded the MBE previously in Britain. 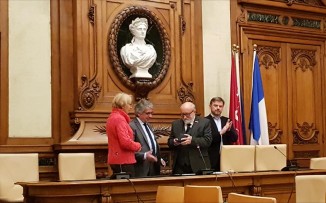 The Friends of The Glory Hole/Ilot AGM

On 2nd February we attended the AGM of the Glory Hole Association in our village hall. Claudie Llewellyn, as President of the Association went through the Annual Report and outlined plans for the year. It is hoped there will be an exhibition on site this summer about the Breton soldiers who fought there in 1914-5. There are also plans to expand the current cabin to make an enlarged exhibition area and to install memorial crosses  to remember the men who still rest beneath The Glory Hole.

Visits to the site will be possible on Open Days and by prior arrangement with the Association. 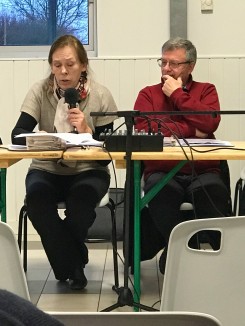 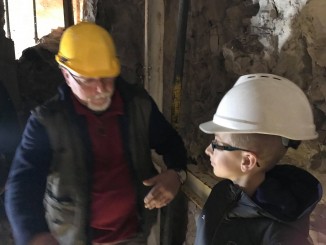 Mid month we had a team from The Hawthorn Crater Association staying with us and we were fortunate to have a tour of the site and the improvements that have been made. It was an excellent visit. The Crater is free to access at anytime and when the Association team are on site, as they plan to be during the year, escorted tours can be arranged. 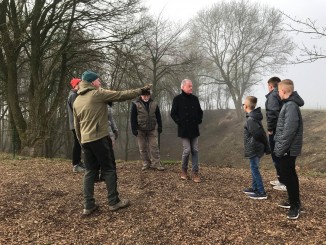 One of the team is Ross Barnwell who is a filmmaker. He took footage during his stay, as part of the ongoing project. Ross, through his company 8000ft Media has made a short film about Beaumont Hamel on 1stJuly 1916 and the Geoffrey Malins film. THe name 8000ft Media comes from the amount of footage Malins filmed on The Somme in 1916.

The DVD of Ross's film is available to buy in Thiepval Visitor Centre and a trailer can be viewed at:

It really is worth a look. We have been impressed by the work at Hawthorn Crater and the Team's approach to archaelogy and telling the story of this special place. 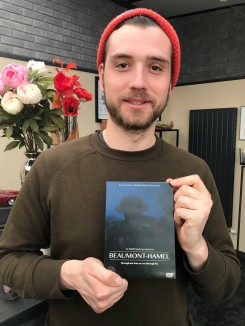 Ross with his film

Hot off the press CWGC have updated their plannend opening for their VisitorCentre near Arras just a 30 minute drive from us. We hope this will be a fabulous "must visit" centre explaining the work of CWGC and their approach to ongoing remembrance. Latest plans are for an opening in late June 2019. Further details can be found on their website: 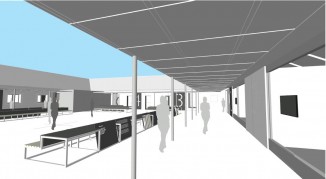 There has been some confusion over the timing of the Anzac Day Service at Villers Bretonneux this year. Since 2008 the Service has been held at dawn (prior to that it was mid morning). This year, the Australian Department for Veterans’ Affairs planned and announced a change to the time to a 10am start. It was hoped this would make it easier for people to get there and encourage more participation by local school children etc. This decision has been over ruled by the Australian Prime Minister and for this year the time has reverted back to being a Dawn Service, on 25thApril 2019. 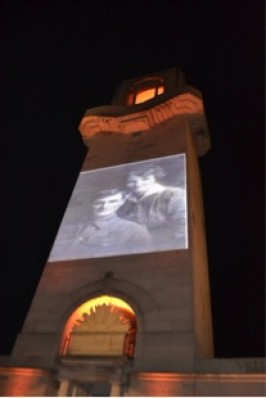 Friend and guest Terry Whenham is a frequent visitor to The Somme and he tirelessly raises funds for ABF The Soldiers' Charity and is indeed an ambassador for the charity. Terry has left with us some lovely teddy bears who require good homes in exchange for a €10 donation to the charity. These lovely bears in their ABF hoodies are called Brodie Bears. Terry's wife Elaine won a competiton to name the bears - we think it suits them very well. We will only release the bears to good homes but we will look after them until they are rehomed. They have already told David to behave himself on countless occasions, as bears do. 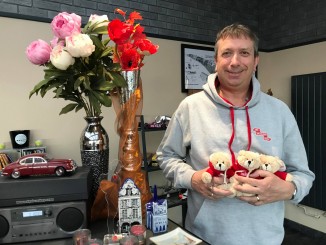 Terry with the Brodie Bears 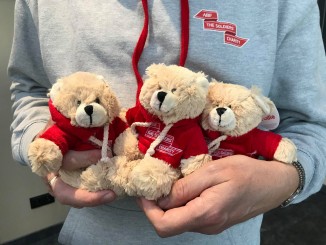 Last week Stephen Benson stayed with us  - a frequent visitor to The Western Front. Stephen is behind the Cheshire County Memorial Project whose aim is to remember the men from Cheshire who fought in all Wars. Not just the Cheshire Regiment, but men from Cheshire who fought in whatever part of the Armed Services. The project has an excellent website, Facebook page and Twitter feed and is an excellent resource. 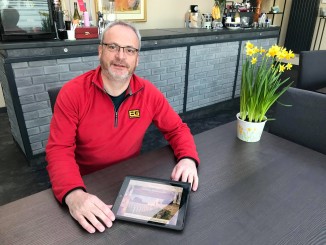 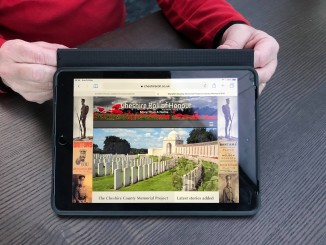 Stephen was accompanied on his visit by Ian Mason, the 2 of them met while guiding with the Leger Armistice and BRitish Legion GP90 Tours last year. Ian has a great grandfather buried in Delville Wood Cemetery and this inspired his love of The Great War. Ian has developed his knowledge over several years and brings friends and family out to the battlefields as an independent battlefield guide.

The Cayley family, mum and dad Sarah and Mark and sons George and Charlie come regularly to the battlefields. Sarah’s great grandfather, Oscar Franklin is commemorated on The Thiepval Memorial and every visit, the family spend time there and in Guillemont where Oscar was killed in 1916 near ZZ Trench. It is wonderful that young George and Charlie come and take an active part in remembering. The baton of remembrance is safe in their hands. 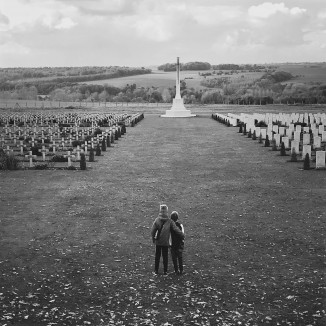 Yes, the renovations have finished, but one little tweak this month. With our super new showers, we decided we needed to upgrade the ventilation in each ensuite bathroom, so we have had new ventilation units installed by our trusty friend and builder Greg.

There is always something to do at No.fifty6. With the gorgeous weather we have been spending time preparing the garden and fields for spring – cutting back and planting spring flowers. Our lovely neighbours even got involved. Jean and Chantal volunteered to help us cut back the area at the side of the house to create more light and space in this area of the garden. Now, Jean is a senior gentleman, but he is a dab hand with an electric chainsaw!  David was worried about fingers being chopped off, but all is well!!! 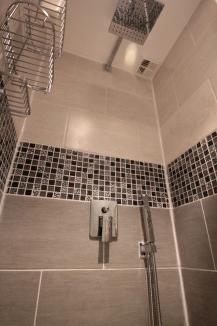 The new shower in The Bluebird Room 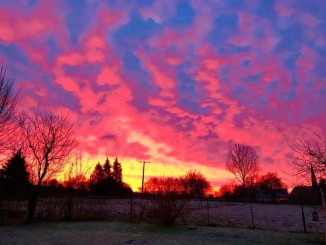 The back garden at sunrise in February

Grizabella the cat is very much at home and she has been a little angel with guests, keeping out of their way. She knows she is not allowed in guest areas but comes to say hello for those who want to see her. The kittens are being mischievous outside but are doing well.

The chickens are much happier in the sunshine and we get 6 lovely eggs each day in return for a little bit of fuss and good food.

Sausage, now our only rabbit, is doing really well on his own. He is happy, full of bounce and eating well. He gets a carrot and cabbage-leaf treat each bedtime. David occasionally reads him a story too.

We had new interlopers this week though. Jonathan our neighbour keeps ducks and he has ducklings at the moment. These intrepid youngsters made a great escape through the adjoining fence and joined our chickens in their coop. David became a duck herder for the morning and they went safely back to their own little pond with their mum. Only for the same thing to happen again yesterday. Well everyone likes a visit to No.fifty6! 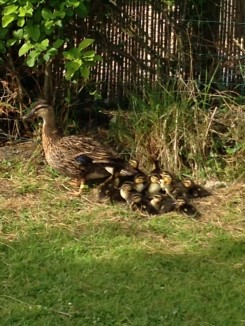 Escaped ducks pay a visit and mum helps them home 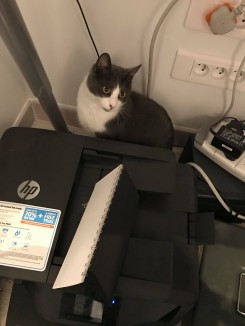 Griza helps in the office

Hi David and Julie
Thanks for the newsletter, some fantastic work being done by so many to keep the past alive.
Looking forward to seeing you in May.
Take care
Tim and Deb

As always, your newsletter is a mine (sic) of local information and extremely useful to the non-specific Western Front guide, (with most focus on D-Day etc. this year,) as a mnthly must read.
Thank you for taking the trouble to write this, albeit a brilliant way of keeping yourselves foremost in one's mind!
Currently don't know where, don't know when but.......

David and Julie, great to hear the news and info on what is coming up in the area, it all makes us want to drive north to see you...perhaps soon

My tentative plans to stay next month have been scuppered by a broken shoulder. It will now be at least 2 months before I can drive or cycle - but I have promised myself a visit so that I can see all the changes that you have made

Look forward to seeing you next month.

Hi Julie and Dave .Even though I have not been to 56 yet I feel I know you both .Your newsletters are great many thanks .all the very best to you both .Terry

Hi Julie & David, Love reading your newsletter as alway I see you have been busy. Love the new Office girl !! And your new guests Brodie Bears. Very cute. Hope you are both well. Take care. Kindest Regards Chris & Bill

Always love your newsletters ... they never fail to update us on all the gossip, near and far. Roll on the next one :-)

Hi Julie & David,
I do enjoy reading your updates. Odd, but it makes me feel 'home sick' and can't wait to come back !
Kind regards
Richard

Hi Julie and David
Hope you are both well. I love receiving y our email updates - brings back good memories of a lovely stay at Number56! I am hoping to return this year and will be in touch.
Very best wishes
David

Once again a super news letter. Great to catch up. Please,please keep us a bear! Glad Sausage is Ok and Griza really looks at home. Lots of love. Desperately try to sort some dates before June x

Good to catch up! I don’t suppose CWGC mentioned our ceramic poppy placed at Point 110 Old Cemetry, did they (and what they’ve done with it)? Love and hugs.

30 minutes ago we said:
Thiepval. So much work being done to restore the memorial. Under the sheeting much artisan activity to restore it t… https://t.co/K20sisQREf