February 2020 – Extreme Weather and Stories to Tell at no.fifty6

Posted on 29th February 2020 by Julie and David Thomson in General News. 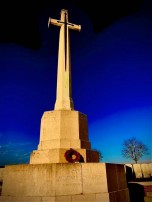 February often blows in as a ”soft” month, not quite winter, not quite spring. This February has not been soft – wild winds, rain, rain, rain, some sunshine and even finishing the month on some snow. But, always, the wind.

Storm Ciara blew across Mash Valley and dislodged 3 of our roof tiles, soon fixed and no other damage. Most of the rain has come at night so it hasn’t deterred our hardy visitors from their explorations. The fields are very soggy but new growth is here, even the trees are budding as the temperatures despite the wild elements, are mild. Apart from the last 2 days, which have been icy cold with a fall of snow, now cleared by the rain. 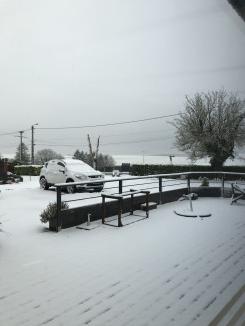 Our thoughts turn to the men who were here in all weathers. Seeing the seasons as we do but during war, not peace.
Edward Thomas enlisted in July 1915, fought in the First World War, and was killed in the Battle of Arras in 1917. His poems turn repeatedly to rural England. This poem, written in February 1916 is called “February Afternoon". Written in a period of violent change and uncertainty, this poem recognises a timeless quality in the patterns of the “natural world”. We recognize this ourselves, in this fast-changing world where some media create their own chaos, unkindness, fear and confusion. We look out on the nature here and love its soothing rhythms, even though the weather can be wild at times as it has been this month.

Men heard this roar of parleying starlings, saw,
A thousand years ago even as now,
Black rooks with white gulls following the plough
So that the first are last until a caw
Commands that last are first again, – a law
Which was of old when one, like me, dreamed how
A thousand years might dust lie on his brow
Yet thus would birds do between hedge and shaw.
Time swims before me, making as a day
A thousand years, while the broad ploughland oak
Roars mill-like and men strike and bear the stroke
Of war as ever, audacious or resigned,
And God still sits aloft in the array
That we have wrought him, stone-deaf and stone-blind.

And as always at No.fifty6, there are stories to tell, as we remember 2 particular soldiers this month in the company of their ancestors..

Gary James and David Locke visited this month. A visit to coincide with the 103rd anniversary of Gary’s ancestor’s death here on the Somme battlefields. Gary visited on the Centenary and has done much research on 2nd Lieutenant Edwin Kentfield of the 23rd Battalion Royal Fusiliers.

Gary writes: Edwin joined up on 8th September 1914 and served in C Company of 16th Middlesex.

After seeing action at La Bassee around Christmas 1915, Edwin left the company in April 1916 to take up a Temporary Commission.

While he was in the UK undertaking Officer training the men he trained with went into action on 1st July 1916 as part of the attack towards Hawthorn Ridge.

Edwin returned to France in September 1916 as a 2nd Lt with 23rd Battalion Royal Fusiliers and they saw action on Redan Ridge on 13th & 14th November 1916. After a period of training, they went back into the line on 16th February 1917 and were part of the attack towards Miraumont the following daybreak 17th February.

Edwin was killed in this action and is one of the missing on the Thiepval memorial, while some of his comrades lie in the Regina Trench cemetery.

There is a headstone of an unknown 2nd Lt which may or may not be Edwin. I lay a cross in remembrance there whenever I visit.

The photos attached are from Hawthorn Ridge and Cemetery plus the unknown Officer in Regina Trench.”

3 years ago, Gary went out just before daybreak on 17th February just as Edwin had done. A pilgrimage he will never forget and he felt compelled to visit again. As Gary is drawn to the headstone of the Unknown 2nd Lieutenant, we too wonder if it is Edwin? Either way Edwin, know that you are remembered. 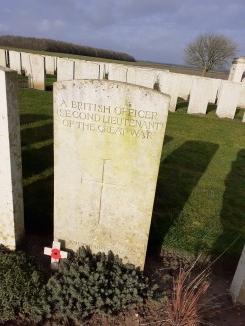 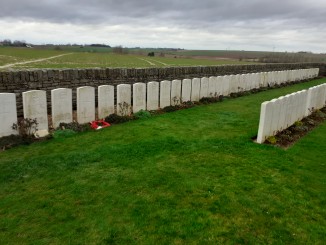 Lisa Hatch and her cousin Paul Young, visited last weekend with their spouses Matthew and Tammay, to remember their great Grandfather Joseph Henry Young.  When Lisa first contacted us to enquire about staying and possible guided time with David, she had already researched her Great Grandfather but nothing prepared this lovely family for their experience following in Joseph’s footsteps.

Joseph had been a regular soldier in the 3rd Battalion Worcestershire Regiment, joining up in 1902 and serving overseas. His burned Service Record still exists.   When War broke out in 1914, he rejoined, this time the 10th Worcesters first as a Lance Corporal, and as a man with his experience soon became a Serjeant.

The 10th Worcesters will forever be linked with our village of La Boisselle. On 3rd July 1916 Joseph led his men before daybreak to try and capture our village. Somewhere, in the ruins of the village Joseph lost his life during fierce fighting. It was a battle that also saw the 10th Worcestors lose their Lieutenant Colonel Royston Pigott (shot through the heart) and a VC awarded to  Private Thomas Turrall who survived.

David walked with Lisa, Paul, Matthew and Tammay retracing the action Joseph was involved in from Usna Ridge to the village church. The Worcesters are remembered on the 19th Division Memorial at the church.

After the battle, Joseph was buried by the side of the road just a few paces from No.fifty6.  CWGC records confirm this. After the Armistice the Graves Registration Unit reburied men who lay in small battlefield cemeteries and Joseph was reinterred in Ovillers Military Cemetery. Lisa and Paul stayed in our bedrooms which look out over the Cemetery.

As light was fading after exploring the village which Joseph had fought and died for, they made an emotional visit to his grave, leaving a wreath and poppies. Lisa contacted her mother while they were in the Cemetery so she too could experience their pilgrimage. Rest easy Joseph, knowing you lay among extraordinary men. We will keep an eye on him on our regular walks to Ovillers.

Lisa says: "Our ‘Walk With Me’ pilgrimage to follow our Great Grandad’s footsteps was an amazing experience for us. It surpassed all of our hopes and expectations. It was an experience we will always remember, in fact it is one we are already passing on to our families next generation; with the passion and compassion it was delivered to us.  We cannot thank you enough. We will be back to see you. Lisa, Matthew, Paul, Tammay and of course Joseph“ 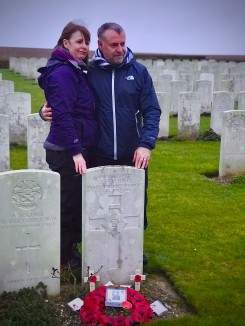 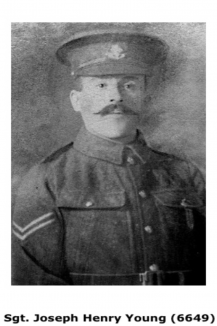 We have added a new facility to our www.number56.co.uk website.

You can now check our availability if you are thinking of coming to stay. Have a look at the link attached.

We keep the availability calendar up to date. Contact us via the website or email or phone or social media if you want to book your chosen dates just as you do now.

Contacting us remains the only way to book with us – we are not on any booking sites, online travel agents etc. We prefer the personal touch.

We hope this availability calendar is a welcome additional tool.

At the beginning of February we were invited to the reopening of the excellent CWGC Experience at Beaurains after their winter closure. We took guests Mick and Jeanette with us and they thoroughly enjoyed the visit which gives a behind the scenes look at the work of the CWGC. We even got served an English breakfast as a reopening treat!

Although we have been busy with guests in February and have updated our website, we have found time to make sure we are spick and span for the year ahead. We have decorated the lounge (all those books!) in colours which on the paint tins are called Earthly Hue and Opulence! The shoulders ache a bit after wielding the paintbrushes but we are pleased with the results. David is currently putting all his model planes and lorries back in place…

5 chickens and Shere the cat are all fine. Freshly laid eggs are still arriving at the breakfast table. Though neither hens nor cat like snow. White stuff freaks them out. And David has just come in from the garden and said: “one of our hens can count her own eggs. 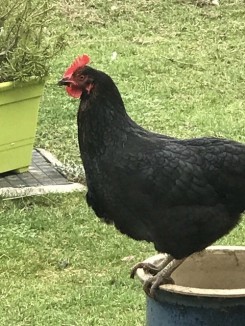 All is well at No.fifty6.

Hello Julie & David
Just sending you our very best wishes in the face of all the uncertainty with COVID-19. Stay safe. We remember our visit in 2016 so fondly and hope to return one day. You - and the Somme - are often in our thoughts.Margaret & Simon, New Zealand

Always so good to read your newsletters and see that you continue to help create such profound experiences for people re-tracing their ancestor's footsteps. Off to wish Pater a Happy 89th! Arohanui, S

Wonderful update friends.
The story regarding Sgt Young gave me shivers, such an amazing journey.
Glad all is well and looking forward to the next update. All the best from Ontario.

As always it is lovely to hear what has been happening at No 56 and read the stories of your visitors. I hope the weather starts to warm as here in Australia it is cooling down. Stay well and look forward to next months news. All the Best Chris & Bill xx

Another fascinating read. Your news and the stories of visitors remain a great way of retaining a link with No 56, wherever I am.

Excellent news letter as always, looking forward to seeing you in June.

Thanks for a great stay last month and posting the photos in this newsletter. I see that David's jokes don't get any better. The eggs at breakfast are superb. The CWGC experience is well worth a visit and puts into perspective all the work that goes on behind the scenes to maintain the vast number of headstones on the Somme and elsewhere in the world. Hope you see you both again during the year.

Another fascinating newsletter, look forward to the next one

Funnily enough, just yesterday, I was looking into the 16th Bn Middlesex for our trip in May as one of the men killed on 1st July was a Croydon lad.

Another enjoyable read. I love it when people re-trace their ancestors steps.
We will certainly visit Joseph at the end of the month.
Looking forward to seeing you both.

Hi Julie and David
Lovely to receive another newsletter from Number56! Really looking forward to staying there again in June.

Rest in peace Edwin and Joseph.

Back from NZ last week to daffodils, snowdrops and fritillaries .!! A visit to Wellington (Sth Island) Te Papa museum brought a different dimension for us - the Gallipoli exhibition. Stunningly done (they do museums well in NZ), it featured compassion and heartache in equal measure; the dioramas were about 3 times normal size ... l was particularly impressed with the last one (a nurse receiving letters returned to her, unopened, confirming her brother’s death). We Brits don’t come out of it too well - no change there then - but if you’re planning to pop over on a visit, include it on your ‘must do’ list. Seems like you’re both ‘fully recovered’ - well done! Love G&J (and M) XX

Thanks for this - a monthly highlight!

As always, an emotive; informative; and witty monthly update! Stay well you two. All the best to you both ...