Posted on 30th July 2014 by Julie and David Thomson in General News. 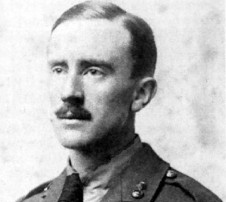 The author JRR Tolkien saw active service in the First World War as a Second Lieutenant in the Lancashire Fusiliers.  He arrived in France in June 1916 and was involved in The Battle of The Somme in July and August in the hard fought area around La Boisselle.  This year also marks the 60th anniversary of the publication of The Fellowship of the Ring.

When Britain entered the war on 4 August, Tolkien's relatives were shocked when he decided to put volunteering for the Army on hold.

In a 1941 letter to his son Michael, Tolkien recalled: "In those days chaps joined up, or were scorned publicly. It was a nasty cleft to be in for a young man with too much imagination and little physical courage."

Instead, he delayed enlistment until he had completed his final exams at Oxford University, for which he received a first class degree in literature. In July 1915, Tolkien was commissioned as a Second Lieutenant in the Lancashire Fusiliers, and was transferred to the 11th Battalion with the British Expeditionary Force. He arrived in France in June 1916.

The following link is an interesting article about Tolkien's involvement in the First World War and the effect it had on his writing.

There is always something you learn everyday no matter how old we are.