Posted on 30th June 2018 by Julie and David Thomson in General News. 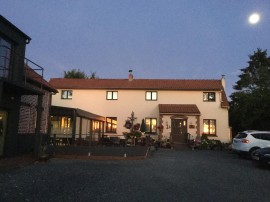 Flaming June…which incidentally is the title of a painting by Sir Frederic Leighton which we have on our walls…It has been a month of warm temperatures, blue skies, breezes and the early promises of a good summer. Perfect for exploring. The farmers look worried about the current lack of rain and irrigation systems are currently popping across the goldening landscape...a far cry from last month’s “inondations”. The 1st July Somme commemorations are due to be the hottest for many a year. We will be at Lochnagar Crater at 07.28hrs on the 1st July to mark the 102nd anniversary of the start of The Battle of The Somme.

As always there has been plenty going on here at No.fifty6 in June with guests, activities and the odd curve-ball to keep us on our toes (and we don’t mean the World Cup).

Personal Pilgrimages – One So Young

Melanie and Michael Yip came from Australia to learn more about the history here and on a Walk With Me Day with David followed their Great Uncle Captain William Arthur Crebbin who was killed in action 4thApril 1918 whilst serving with the 8th Rifle Brigade. Involved in the Spring Offensive of 1918 when he died near Quarry Crossroads, Le Hamel, William is commemorated on the Pozieres memorial.

Adrian Bean and David visited from Anglesey and Cheshire to learn more about the history here. They were drawn into events on The Somme and laid wreaths at both Mametz Wood and Thiepval to remember those who fought and did not come home.

Roger Staker and Elaine are frequent Somme visitors and brought with them Alan and Margaret who came to commemorate Alan’s grandfather, John Richard Jones, who served with the 18th Battalion Middlesex Regiment. He died on 27th October 1916 following wounds received about 3 days earlier and is buried in Grove Town Cemetery (a remote but favourite of ours). Alan found it both humbling and moving to stand at his Grandfather’s grave.

Andrew and Geraldine Calvert from Northamptonshire visited for the second time, having traced more ancestors who were involved in the War. The more they uncover the more they feel connected to the history. Harry Calvert was taken as Prisoner of War in the Lens area in April 1917.  His brother Fred Calvert of 9th Battalion Kings Own Yorkshire Light Infantry died on 2nd December 1916 in a Red Cross Hospital in Perth, Scotland. He died after a gunshot wound to his knee and having his lower leg amputated. He is buried in Wainfleet cemetery in Lincolnshire, UK. Andrew and Geraldine visited the places where Fred would have been when he was on The Somme.

Dave and Gill Lightfoot visited from Chester. Dave’s Great Uncle Private Frank Steer was killed in this area around La Boisselle/Ovillers on 7th July 1916 aged just 16 while serving with the 13th Cheshires. He is commemorated on the Thiepval Memorial. Frank’s tender age really moved us. Here is his story.

Born in the spring of 1900 Frank was one of eight children of John and Emma Steer of 38 Belle Vue Road, Wallasey. By 1911 the family had moved to 13 Hood Street, Wallasey. The 13th Battalion Cheshire Regiment, also known as the Wirral battalion, was formed at Port Sunlight on the 1st September 1914. Frank joined up aged just 14, probably evading the questions about age due to his “fine physique”.

On the 6th July 1916, his battalion occupied the trenches in La Boisselle and on Friday the 7th they attacked - the war diary reads: "Over the parapet at 8.05am after suffering severe casualties we reached our objective and consolidated. A number of prisoners and war material fell into our hands. Casualties on this day very heavy, 18 officers and 243 other ranks."

Frank had turned 16 in the April. His death was reported in The Liverpool Courier:

SEACOMBE BOY HERO KILLED.Of the many instances of true patriotism that have been brought to light during this great war none is more deserving of recognition that that of Pte. Frank Steer, of the Cheshire Regiment, whose home was at 13, Hood Street, Seacombe. Although only 14 years of age when the war broke out he at once joined a local battalion of the Cheshires on its formation. He was easily passed as of military age because of his fine physique, but his parents desired that he should be released. In reply to one of their letters requesting him to come home he replied, "I've thought it out very seriously and I've come to the conclusion that I would rather see it through. Certain ones would think if I came home . . . I was frightened to see it through."

In July last he was posted as missing, and now at the age of sixteen he has been killed.” 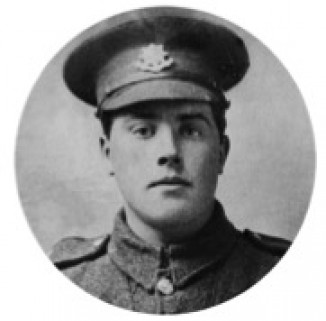 For this month we will leave it there, as Frank represents so many who came and never went home. His young life extinguished before his time. It is lads like Frank that we will be remembering during the July Somme Commemorations.

We have written in previous newsletters about the Pozieres Son et Lumiere. This is a spectacular show held over 2 weekends - July 20-22 and 27-29  in a specially built open air theatrical setting in Pozieres.

Again this month we were asked to record a vocal scene about the Armistice. The mobile recording studio was brought to our Garden Room and our guests, Roger, Alan and Andrew helped add their voices to the recording.

One final scene about animals in War was recorded here on Saturday.  It is lovely to be involved in the English soundtrack version of the Son and Lumiere. David is still being a Diva and insists on honey and hot flannels at bedtime. 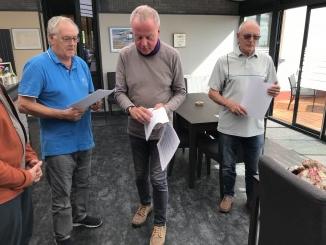 What is it about Notts and Derby?

Apart from being a lovely landlocked area in the middle of England we have had a surge of lovely people from the Notts and Derby area. Firstly last month Roger Wood came with friends Keith, Pete and Simon all from the Notts and Derby area. It is always a pleasure to have them here as they make their pilgrimage to pay their respects to the fallen. Then at the beginning of June the Derby Triumph Motorcycle Owners Club made a repeat visit to us – with even greater numbers than previous visits. This was our sternest test for the new areas of no.fifty6 – every dining seat in the new area filled and a range of new and classic bikes parked in our car park. We love having these guys here, they explore the region and further afield by day on their bikes, riding safely and courteously, looking out for each other (the group spans in age from 40 something to 81) and relax and enjoy good food and repartee here in the evening. We had a guest speaker, friend Colin come and talk about The Underground War and our friend singer/songwriter Bruno Sauty came to perform one evening.  The Wallet family came to help on the last night and for the children to see the motorbikes.  The new kitchen was filled with food preparation and cooking and the dining room and terrace reverberated to the sound of chatter and laughter.  It was quite a week. 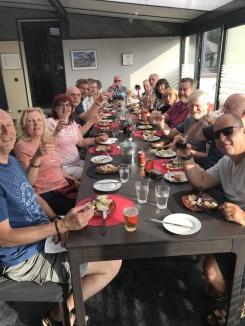 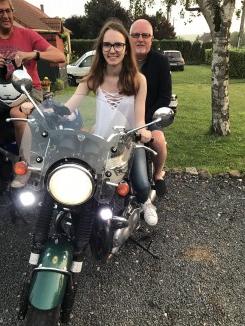 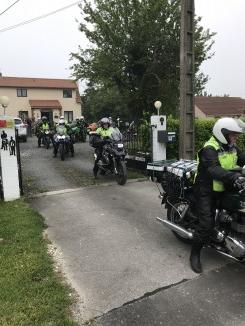 The New Space at No.fifty6

As stated above all areas up and running and now run in – just like a well oiled but well loved machine. Feedback from guests who have seen it for the first time has all been so positive, the trials of the never-ending building work fading in the memory.  The garden is starting to look colourful with summer flowers and David even has a new lawn mower now. No need for a goat. 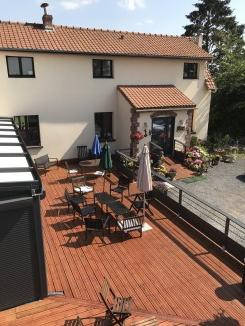 We were pleased to learn this month by formal announcement that the house which sits within the grounds of Thiepval Memorial Park which was lived in by Mme Poitie the ex Mayor of Thiepval before she died, will be opening as a Tea Room. It will be run by lovely French couple Dennis and Francoise Bourgogne, the proprietors of the renowned Auberge De la Vallee D’Ancre restaurant in Authuille. There is work to be done on the house, but the Tea Room is scheduled to open in April 2019. We will keep you posted but we think this is a welcome addition to Somme facilities and it will be lovely to see the old house made use of. 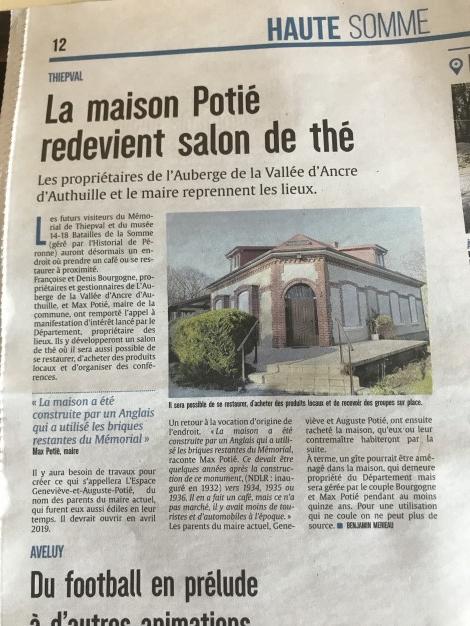 From 1stJuly the new speed limits come into law in France. Roads that were 90 kph are now 80kph - 2 lane roads outside of villages such as the D929 which runs past our house.

All our guests are lovely but sometimes their generosity of spirit takes us by surprise. Adrian Janman visited last month and took a picture of Julie’s breakfast apron while he was here. We thought nothing of it. Then in the post last week came a replica apron which Adrian’s wife Theresa had lovingly made, complete with chicken fabric at the edging and our logo embroidered on. It is wonderful! 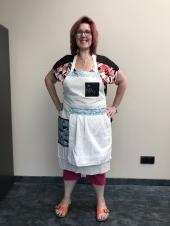 Then Sally and Chris Burge visited and brought with them a There But Not There perspex Tommy. Throughout 2018 life-size Tommy’s will be appearing throughout the UK as we commemorate the end of the War. In addition to the life-sized silhouettes which will be installed across the nation, There But Not There have created a limited-edition table-top Tommy figure, to represent every single name from the 888,246 British and Commonwealth Fallen of the First World War.

Sally said, "we thought this Tommy needed to come to The Somme. He needed to be here. To stay here with The Fallen”. Thank you Sally and Chris. 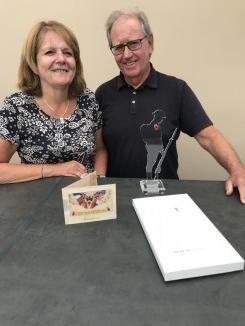 Sad chicken news – Brigitte our last original old girl died this month. Peacefully. It was like she had made sure the new chickens had settled in and then, her duty done she went over the rainbow bridge to scratch around with the other girls who had given us so much pleasure. Goodbye old girl.

Our new girls Marge, Georgette, Elsie, Harriett, Edie and Florence are spirited!  They have adapted to life without Brigitte and give us 5/6 eggs a day. They love their life in our garden.

Guest Debbie Brown spent an afternoon brushing our rabbits. They love a cuddle and were happy bunnies by the end of the afternoon. 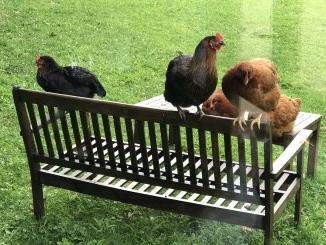 Nice to see relatives of Frank Steer have been over, I am in contact with another of Franks relatives in New Zealand, Frank details are on my projects Roll of Honour http://www.cheshirecountymemorialroll.com/soldier/?i=6045/w/19-private-Frank-Steer

Another great newsletter. The new dining area and terrace look great. Hope to see you soon.

From all at Derby Triumph club a big thank you and our apologies for our stress test on your services.
What can be better than Good food, good company and the right atmosphere to appreciate it in. Keep up the good work. Phil R

Another excellent newsletter and clearly never a dull moment chez vous! Delighted to see the photo of Sally & Chris and their gift to you both.

Keep up the brilliant work!

PS All the best people come from Nottingham. Not so sure about Derby though!!

Sorry to hear about Brigitte. Fond memories of having tea in the garden, hens all around and unnaturally hot weather for October (last). Glad to see House alterations completed and great newsletter. Cheers, Rob

Once again a very informative news letter, Can't wait to see the new dining area, and the conversations round the dinner table.

Heather and MalcolmJohnson says: 01 Jul at 10:31AM

Lovely to hear the latest news and see your latest pics. Can't wait to see improvements for ourselves later in the year.

Lovely hosts deserve lovely guests and it is lovely to learn that they have still been arriving at your door!

All the best to you both, Malcolm & Heather

Frank Steer, 16? For once in my life -speechless and a tad emotional for the Lightfoots (we know what it’s like). Have a good Summer, new BFFs - this newsletter comes around very quickly ..!