Posted on 31st December 2014 by Julie and David Thomson in General News. 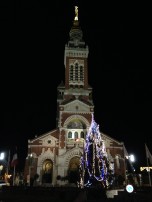 A massive THANK YOU to everyone who sent cards and messages in response to our Christmas e-card in December and we look forward to meeting again in 2015 with new stories to share. We would also like to take this opportunity to wish everyone a Happy New Year.

The month saw two major commemorations in the area. The first commemorated the Breton soldiers killed in Ovillers and La Boisselle in December 1914 and was a well attended event with over 500 people attending including groups from Brittany and Germany.  The commemorations culminated in a flame lit service of reconciliation at the ‘Glory Hole’ or ‘Ilot’ as the French refer to it. 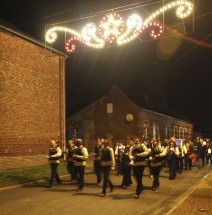 100 black and white balloons were sent into the air at the Breton Calvaire to commemorate those who fell. Breton pipers came from Landernau, the village where many of the Bretons who died in the conflict were from.

The second event was the Treve de Noel in Pozieres Church which commemorates the Christmas Truce of 1914. Such was the popularity of this commemoration dozens of people were forced to stand outside in freezing temperatures as the church was unable to accommodate the huge numbers who turned up to experience this unique event. All agreed however slight discomfort in 2014 bears little comparison to the harsh conditions endured in the trenches a century ago.

The Treve at Pozieres on 20 December. Standing room only!

La Boisselle and Ovillers in 2015

2015 marks the centenary of the ‘First Battle of the Somme’ when the French and German armies have ‘dug in’ and the stalemate of trench warfare begins. Throughout 2015 we intend, whenever possible, to recount the daily events of 100 years ago in La Boisselle and Ovillers from the French and German perspective on our Facebook page –www.facebook.com/Number56BedAndBreakfast. For example: on New Years Eve 1914 a single French artillery round is fired into the German line with no response – the front is quiet as both armies consider what the New Year will bring.

We are a champion of the creative Ian Mould who not only was responsible for the Bedfordshire Regiment Memorial being erected, but designs and creates unique metal door numbers and carvings. We proudly have our No.56 carving at our front door and have commissioned more for our gate posts. Ian is happy to take commissions and the price is around £20 plus p+p. Ian can be contacted at : 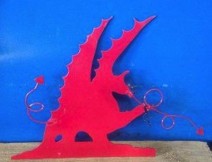 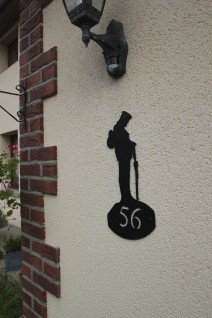 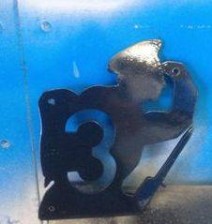 A selection from the door numbers Ian has made including our 56.

Also, watch this space as Ian is creating something very special for No.fifty6. More on that in the coming months...

Happy New Year you two.
Another year . . . and another visit planned.
We are both looking forward to seeing you and the Somme again during June and, as our list of 'places to visit and things to do' gets longer, we may well be knocking on 56's door again in the autumn.
Keep on posting . . . please! M&K.

Best wishes to you both for a happy healthy and prosperous 2015. Looking forward to a minimum of two visits this year!

Many thanks for the Christmas and New Year messages. All the Very Best to you both! Very interesting to read of the commemorations in your latest post - wish I could have been present. Got a feeling I am going to be saying that frequently in the next four years!
Bob.

Good to hear your news and best wishes for 2015. My book 1914 Campaign (companion to Somme Campaign) came out in time Christmas and I am well on the way with 1915 Campaign. Speak to you soon. Andrew

Thanks for keeping me on your list I am always interested to read all your comments on every one of your postings, keep up the great work you both do, and I hope to,see you at 56 some time this year, may 2015 be a good one for you, many thanks.