Henry Whenham - He Gave His Life So We Might Live

Posted on 20th April 2013 by Julie and David Thomson in General News. 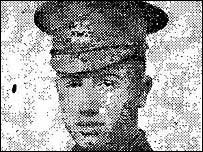 A recent guest at No.fifty6 was Terry Whenham who is a frequent visitor to the Somme and has a wonderful knowledge of the events that happened in this area.

On his trip to The Somme, Terry visited the grave of his Great Uncle Henry Whenham.

This is Henry’s story.

Henry was one of Kitchener's volunteer army. He joined up 2 days after war was declared. For most of Kitchener's army, the Somme was their first, and last battle. Not so for Henry. Henry was in The Buffs' (East Kent Regiment).  His training was rushed through and he took part in the 2nd Battle of Ypres where he was shot in both feet. Following a spell in a hospital in Bristol he returned to the front just in time for the Battle of Loos.

On the first day of the Battle of the Somme, Henry’s battalion were in reserve - they were a mile behind the front line and when they were called up, they had to march past all the casualties from the Middlesex regiment.

In the early hours of 3rd July the Buffs took part in an attack on the German front line at Ovillers (opposite No.fifty6) and many of the Buffs who died that night are buried in Ovillers cemetery.

On 3rd August 1916 the Buffs’ objective that evening was Ration Trench which was situated in the field between Ovillers and Poiziers towards Mouquet Farm. The attack was successful but Henry was wounded and died of his wounds the following day 4th August 1916. 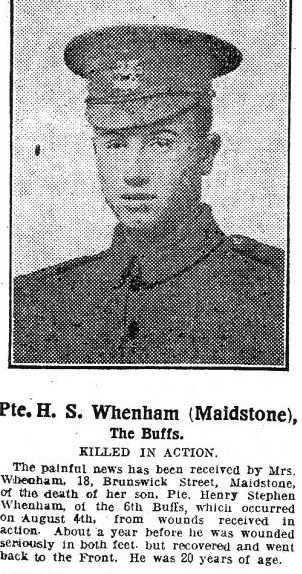 Henry's brother, Terry’s Granddad, was in the RGA (Royal Garrison Artillery) and told his family that he saw Henry lying on a stretcher and that was the last time he ever saw him. There is no reason to doubt this story. Apparently, when Henry was on leave after his wounding at Ypres in 1915, Terry’s Granddad suggested Henry tried to get a transfer into the RGA because it was safer than being in the infantry. His request was declined and he was sent back to the Buffs just in time for the Battle of Loos.

Henry is buried where he died in the village of Bouzincourt (close to Albert) that was a Field Ambulance Station a few miles behind the lines.

Henry's death hit his parents hard as he was the only wage earner in the family. His parents lived in poverty throughout the war and until their death in 1935 and 1946.

It seems that Henry was engaged to a lady called Dolly. After he died, Dolly married Henry's brother, Arthur. Dolly and Arthur are Terry Whenham’s grandparents. Henry’s gravestone reads: "He gave his life that we might live". Whilst not the original meaning, for Terry's family it is particularly true as Terry, his father and brother would not have been born had Henry lived. 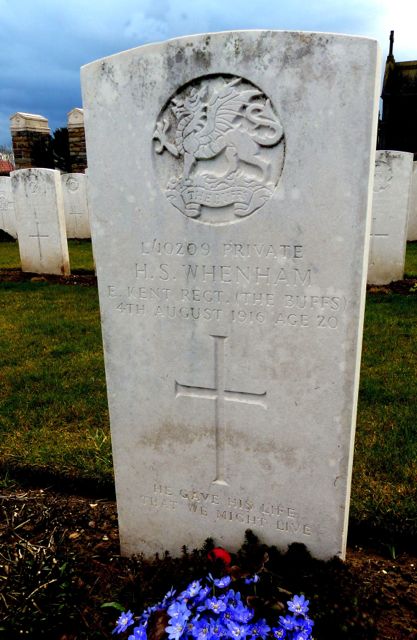 My great great uncle joseph edward whenham died in the battle of the somme aged 19 his father stephen whenham was born in kent could Henry be a relation? im currently trying to do my family tree any info would be appreciated.

My grandfather Albert Frederick Connew, was also with the 6th east kents, and was in A company, he was one of the lucky ones and survived the whole duration of the war, being wounded and gassed, he died in 1974, was very proud of him, going to France thIs years to LOOS and the SOMME and visit where he fought.

Just read your story, 2 of my family died on the same day at the same location serving with the Buffs. Always remebered.

My great great uncle Albert James Marchant, also in the Buffs, also died on 4th August 1916, and must have fought alongside Henry. RIP.

Just trying to find out if I was related in anyway to Henry.

A fitting tribute from Terry to his great uncle. I'll be at No. 56 in July and we shall pay our respects to Private Whenham.
"As we stand amongst the fallen ranks, we'll bow our heads and give thanks".
From the great nephew of Sgt. M. Tickner MM, killed in action in Ginchy 15.09.1916 aged 19 years.