Posted on 19th September 2013 by Julie and David Thomson in General News.

Recent guests at No.fifty6 were the James family from Stony Stratford  - mum Alison, dad Paul and their 15-year-old son Tom.  The family have been inspired by events on The Somme, none more so than Tom. It was a chance conversation with his Great Uncle Pat that led Tom to first visit the Somme 5 years ago and his interest was ignited.   With painstaking research Tom has investigated his family ancestry, with one strand of the family related to the Plantagenet Kings of England!

On his maternal side, Tom discovered the Lyman family. James Lyman (his great great Uncle) was one of 7 brothers and 8 sisters. All 7 brothers served in The Great War. James was the only one who did not return, a remarkable statistic. 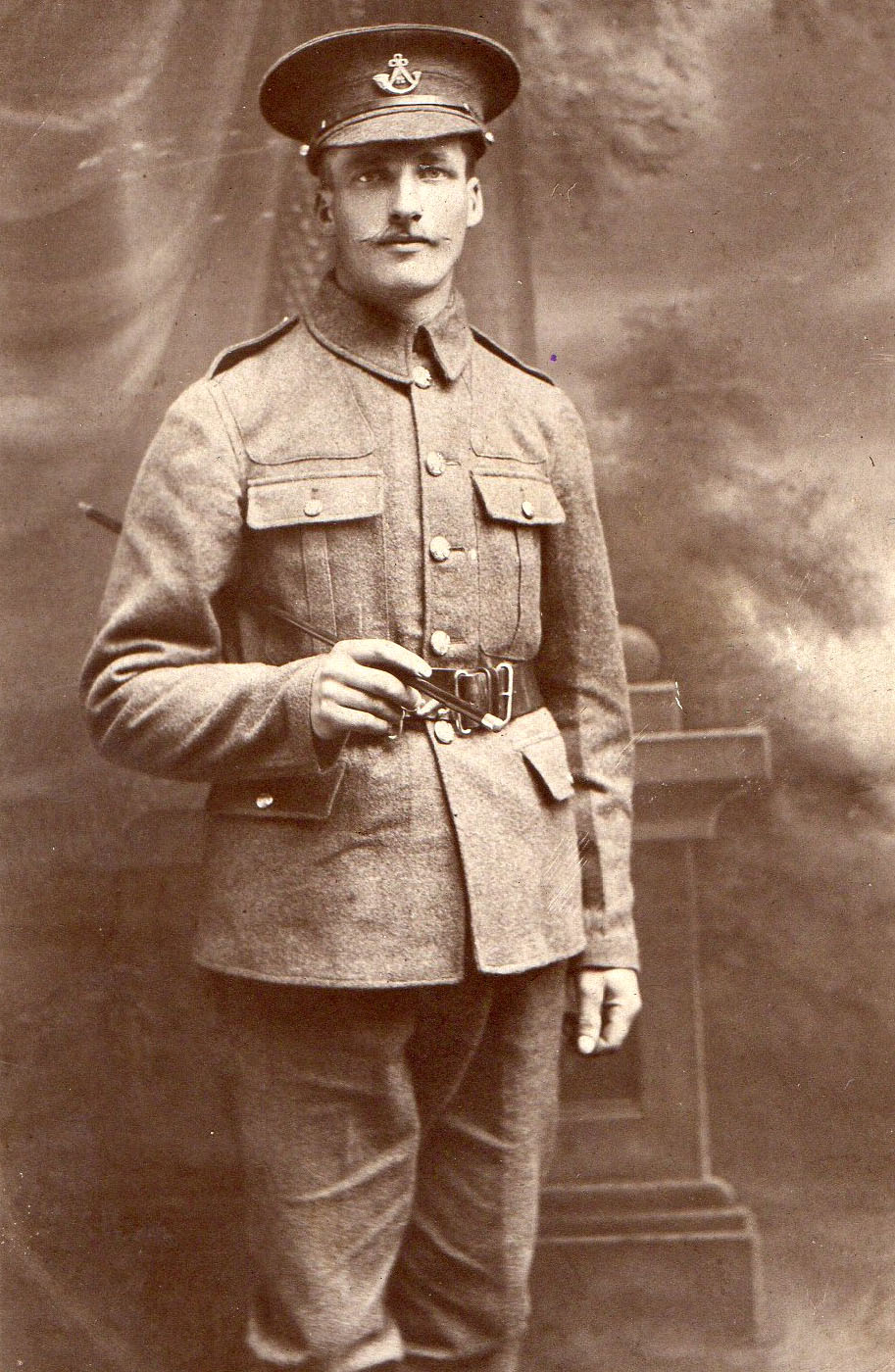 Prior to enlistment, James Lyman worked at a Mr   Cox’s Dairy Farm in Gayhurst, Buckinghamshire. Most of his brothers joined up within a year after war had been declared, but his oldest brother Harry was below the required height for recruitment.  Harry did eventually join the army when the minimum height required was reduced. James enlisted at Bletchley on the 18th March 1916 and then proceeded to France in the following July. James transferred to the 2nd Ox and Bucks Light Infantry were he saw his first action at Bethune.

On the evening of 11th September 1918 at 6:15pm the men of 8th platoon, 2nd Ox and Bucks LI were advised that they were going to go “over the top” to attack Lock 7 on the Canal du Nord. The weather was terrible and the ground was thick with mud.  The Companies were to attack with a frontage of 1,500 Yards with 100 Yards between each wave. B company (8th Platoon) went too far to the left during the attack resulting in a considerable gap between B and D Company. The Germans were able to hold off the two companies in the gap.

James Lyman was mortally wounded during the push for Lock 7 on that evening.

Lock 7 is 2 km north east of Hermies Hill British Cemetery on the Canal Du Nord. The main objective for the 2nd Division was to cross the canal at Lock 7 and capture the heavily dug in German trenches and destroy the German Machine Gun bunkers. The German trench system at this point was known as the Hindenburg Line and consisted of multiple rows of barbed wire and bunkers. Eventually, the Germans were pushed back from the Canal through Havrincourt allowing the Allies to move towards Cambrai. The Allies suffered heavy losses taking lock 7 and Havrincourt but the two captures helped in the allied advance to victory. 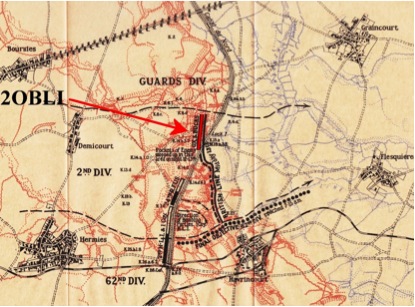 James Lyman was awarded the Military Medal for bravely in the field. It is unknown what he did but from what Tom knows from the war diaries and a letter received from the brigade Chaplin it seems he could have volunteered to be a runner and was Injured doing so. James was brought back to the advanced field hospital where he was unconscious and beyond all help and died a few minutes later.

The brigade Chaplin Rev. George Galbraith buried James in a shallow grave behind the lines were he then read a short personal service at his graveside. 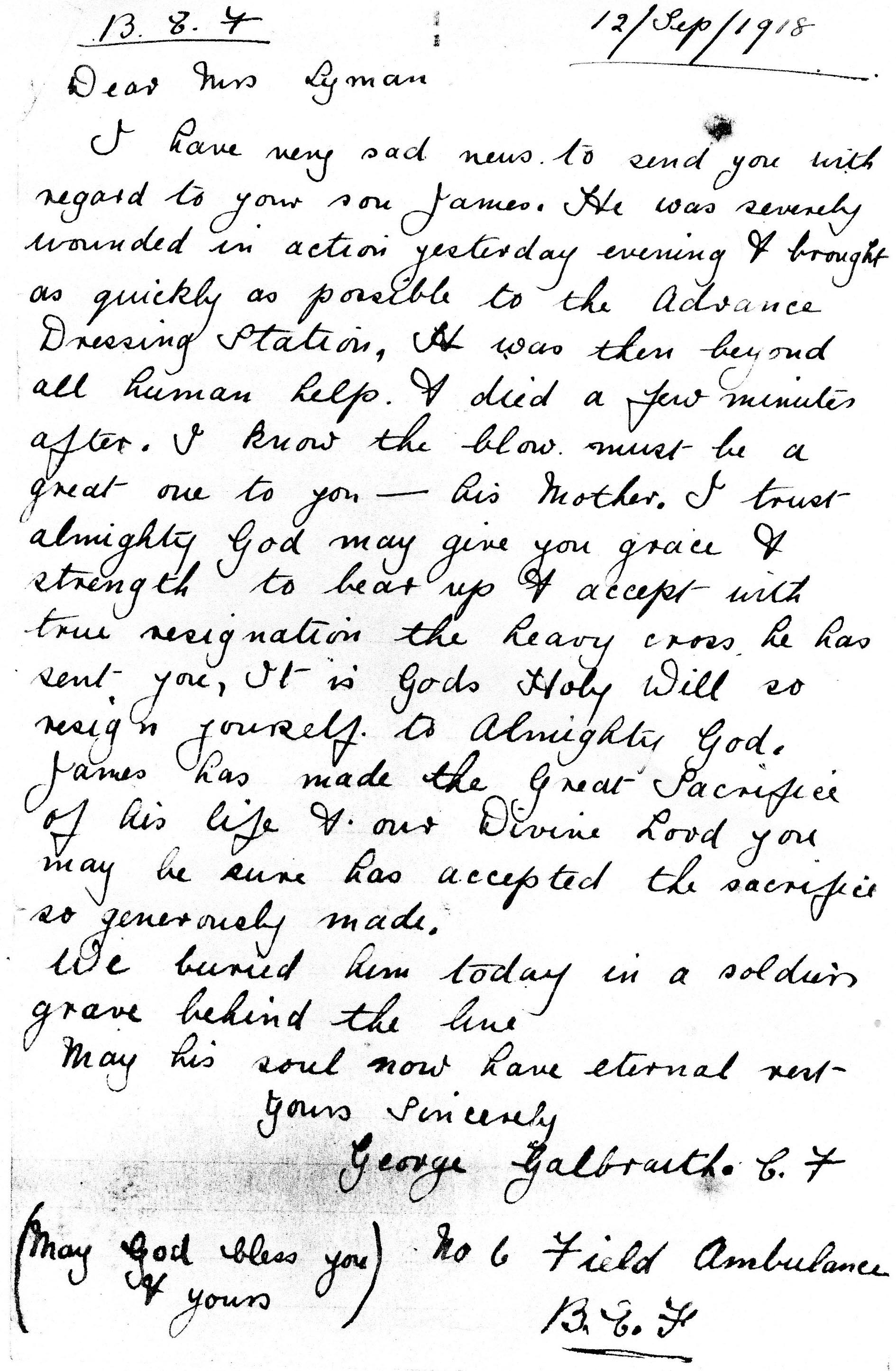 The current location of James Lyman’s Medals is unfortunately unknown.

Tom is attempting to locate the citation for James Lyman’s act of bravery which led to his MM.  If anyone can help with this, Tom would be grateful, as the London Gazette has not been fruitful.  Please contact us here at No.fifty6 if you are able to help. 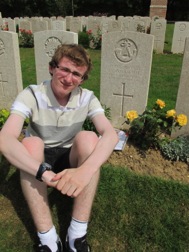 There, Tom read a poem he had written for his Great Great Uncle.

He enlisted for his King

And when he left his town would sing

The glorious Hymn god save the King!

Come and join be part of the team

Push the Germans back to Berlin

Come and join to make your stand

By giving your country a hand

Now in battle morale is no more

As we fear of becoming no more

So now we regret for joining at all

Now we wait for the signal to Go!

As we freeze in the snow

And we start to remember home

Before we know it we are told to Go! Go! Go!

As we went over the top

And then I began to fall into hell

Only to realize that I was no more…

My boy Jim laid to rest in a field

With his family mourning his death

And in the field where he lay

His fellow soldiers come to pray

They always remember what he did

His mother Charlotte asked about him

And could not live without him

And was not to walk on the earth again. 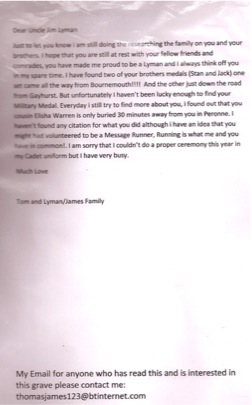 Tom continues his research and would love to hear from anyone who can help with information relating to James Lyman or his regiment.

We were deeply touched by Tom’s personal tribute to his relative and his ongoing commitment to finding out more. In a world where the youth of today are often vilified for not appreciating the events of the past, Tom James is a young man with a passion for historical research.

We are sure James Lyman and those who lie in the fields of The Western Front are proud they are not forgotten.

Rest in Peace James Lyman and continued success in Tom’s endeavors to discover the complete story of James Lyman.

This is so impressive ! You are a phenomenal Historian ! We are very very proud of you ! Good Luck with your GCSEs !

Tom, it is so sad to hear that you do not know the location of James medals, with your continued intrest in your past i am sure one day you will nail the location down or at least find out more.

Those who have passed on live on the lips of the living.

Tom, it's truly wonderful to hear of your interest in your family history and I'm so happy that you have been able to find out so much about James. I am sure he is very proud of you. I wish you luck with your future research!

59 minutes ago we said:
Australia Day. The Australian National Memorial at Villers Bretonneux. Remembering those who came from a land of ho… https://t.co/9q5qsNFmX6