January on The Somme

Posted on 31st January 2017 by Julie and David Thomson in General News. 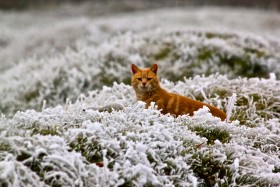 Well here we are well into the turn of the year and can hardly believe January has gone by. So, belatedly a Happy New Year to everyone.

We have had a cold January. Minus something degrees most nights (-8 on occasion) and barely above freezing during the day, but in a way the weather has been perfect for exploring and taking photographs and doing jobs around No.fifty6 before we welcome new guests in 2017.

Wishes of The Mayor

There is a tradition in France that every Commune gets together in January, when the Mayor presents his or her New Year wishes, “La cérémonie des vœux”.  We attended our Voeux de Maire in the village hall on 7th January and Richard Dunning, with the news of his MBE still ringing in our ears, came too as Lochnagar Crater is a special part of the Commune. Christian, our Mayor talked about local budgets, what the Fetes Committee had planned for the year (Alsacienne evening, Bastille Day, Beaujolais Soiree etc), works going on in the village, welcomed newly installed  families and of course congratulated Richard on his MBE. Then we shared in a glass of cider and Epiphany Cake – Galets de Roi. It is a wonderful , community orientated way to start off the year. And David was told to get practicing for all the dancing he will be doing at forthcoming village events! 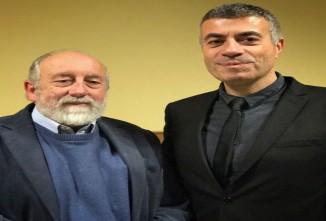 On the night of Thursday 12th January Storm Egon hit us. We had the most violent winds we have had since we lived here.  It was a little scary. The winds were so strong you could barely stand up and many villages in the area lost power. We were lucky that our power outage lasted just a minute or two and that we suffered very little damage. Some branches blown down and our poor sign that hangs over the front hedge is down and needs repairing as it got blown into several pieces. A reminder of the forces of nature. 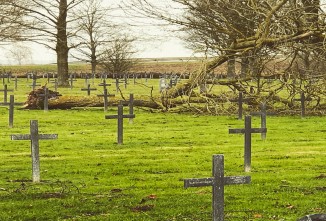 Tree down at Vermandovillers German Cemetery

We have had some very frosty days too in January. Early in the month we had a couple of days of incredible hoar frost. The landscapes were like a frozen fairytale. Thick frost hanging from tress and the ground turned white, but no snow. The heaviness of the ice caused several large branches to come down on trees across the area and there has been a debranching operation from branches weakened by the weight of the frost. January in all its weather extremes. 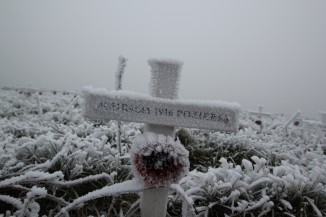 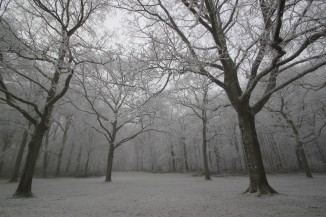 As we cope with our modern day winter it is hard to imagine what conditions must have been like on The Somme in the winter of 1916/17. It is known that it was a terrible winter – cold, wet, snow and ice causing problems in the trenches and for the soldiers. Yet they were here – the troops of both sides. Dug in, in dreadful conditions. Before the April offensive actions around Arras to the north, men were defending and fighting around The Somme area and there remained a steady stream of casualties of war. On our explorations we come across cemeteries bearing headstones of men who died in January 1917. We are always curious to find out more and we try and research to find out a little about the men behind the names.  Like Sapper Ernest Wyatt Wadmore of 222nd. Field Company, Royal Engineers. Died 29 January 1917. He is buried in Hem Farm Cemetery. Hem was in the French sector during the summer of 1916 but the British took over in January 1917 and used the Dressing Station that was established in the farm at Hem – hence the cemetery’s name, with the first British burials there in January 1917.  In the area minor operations were conducted, to deceive the Germans that the Battle of the Somme was resuming. 222nd Field Company Royal Engineers were part of the 33rd Division. Sapper Wadmore was 32, born in Manchester but living in Southampton. His sister, Miss Florence Wadmore, of 56 High Street, Shirley, Southampton, paid 15s. 5d. to have the following inscription carved on his Headstone:

HE ANSWERED HIS COUNTRY’S CALL”

When we visited Hem, coincidentally on the 100th anniversary of his death, there was a wreath on his grave. We are not sure who laid it, as there was no signatory and no entry in the visitors book. We are pleased that Ernest who died on a cold January day is not forgotten.  Representative of those who continued to fall in that awful winter. 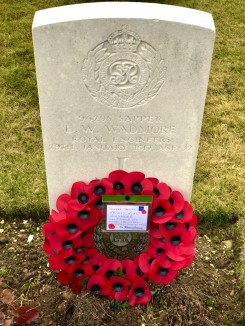 There has been a lot of interest in people wanting to come to France for the commemorations for the Battles of Arras, Bullecourt and Vimy, which mark their centenaries in the spring. We have been notified of the specific commemoration for Vimy 100 which will take place on 9 April 2017. Anyone wishing to attend must register and details can be found in this link:

Cold weather and building works don’t really mix so again slow progress this month. We have had a doorway knocked through from the current lounge into what will be the new breakfast/dining area and the new door is installed. The new dining room/conservatory will not be constructed until the weather is much better. The renovations are continuing - doors and windows are now in and this will enable interior work to progress.  Little by little we get there. 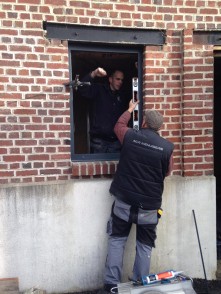 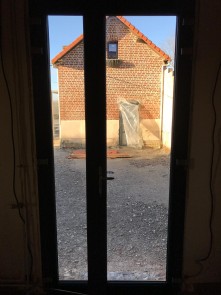 Windows installed and new door knocked through from lounge

The chickens are fine despite the cold, they are happy and we get a few eggs a day.   There is a problem with avian flu in the UK but in France at the moment it is limited to the South West and West duck rearing area where many birds are having to be slaughtered.  We keep a close eye on our girls… fingers crossed the flu virus is controlled and no further action is necessary. 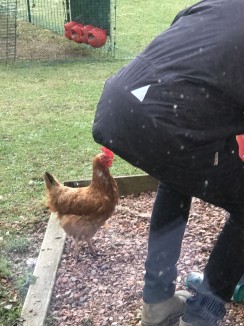 Joan - what you got for me DT?

Thanks for the latest newsletter. Looking forward to seeing you both in 2 weeks time.

Thanks for your always informative newsletter. So, guess Stephen & I have to come back when the building is finished to celebrate the new digs with wine

Many thanks for your newsletter.Always look forward to it.Would hope I get the chance to visit you one day .May I wish you both a happy and prosperous new year.Terry.

I look forward to your monthly news letter always pass it on to the boys.

Thanks for all the news AND weather! I know we still aren't certain which was first 'the chicken or the egg'. But its obvious to all that David has laid Joan!

Saw brilliant programme on TV - 'WW1 Unearthed.' Two Canadians went down into the tunnels at Vimy. Not the usual ones - some right over the back - they were terrified - tunnels are only 2ft, but so interesting.