Joseph Coulson - An Unsung Hero of The Somme

Posted on 13th March 2013 by Julie and David Thomson in General News. 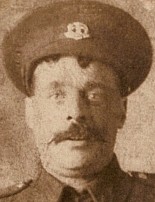 One of the things we are passionate about here at No.fifty6 are the individual stories of the men who joined up, came to France and fought in this area.  Many of course did not make it through the war.  It is hard to think of the tens of thousands of men who perished here and it is often the individual stories that really bring home the human cost of the war and the impact that still reverberates through the generations.

It is the individual stories of the men we hear or read, that to us are like a hand closing the gap from the past to the present.

Londoner Joseph Coulson first joined the Middlesex Regiment in 1892, as an eager 19 year old. He spent much of the next four years in Gibraltar but was medically discharged from the army in 1896 for persistent leg problems. He then began a career with the Midland Railway, beginning as a shunter and working his way up to Head Goods Guard. He married, settled in the St Pancras area of London, and raised five children. 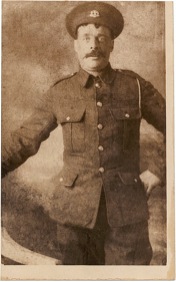 When war broke out in 1914, Joseph, despite his age (40), immediately rejoined the Middlesex once again and travelled to France in May 1915. In the autumn of 1915 Joseph was injured by a shell at Loos and returned home to England to recover from a broken leg.  Once healed, he was required to retake his place in France and in April 1916 headed off to the Somme. There, with the 2nd Battalion on the 1st July, he headed across Mash Valley, one of the largest sections of no mans land across the British front. We all know what horrors happened that day. Sadly we don't know how far he made it across as he was listed as missing until his body was discovered in November that year.

“Both father and son fought in the war as my grandfather had joined the Royal Navy prior to the outbreak of war. My grandfather was injured when his ship, The Russell, was sunk in April 1916, and sadly Joseph died without knowing whether his son had survived, something my grandfather always wished he could change. My grandfather didn't talk much of his father, but says he was a great sniper. I've not been able to prove that from his records but I like to think he was a crack shot!”

Joseph Coulson now rests in the beautiful Ovillers Military Cemetery which can be seen from No. fifty6. 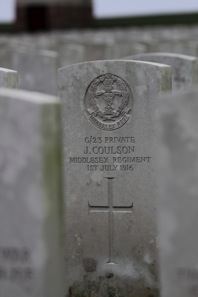 Claire says:  “Since discovering that Joseph now rests in Ovillers, we try to visit his grave every year.  We are all incredibly proud of him, and I'm sure he is happy to have visitors!”

David and Julie have visited Joseph’s grave many times and are humbled by his story.  He was a brave man who despite being previously injured went back to The Front and died doing his duty on the bloodiest day in the history of The British Army. Who knows what horrors he saw and what he went through.  That he now rests in such a beautiful place is some small comfort. 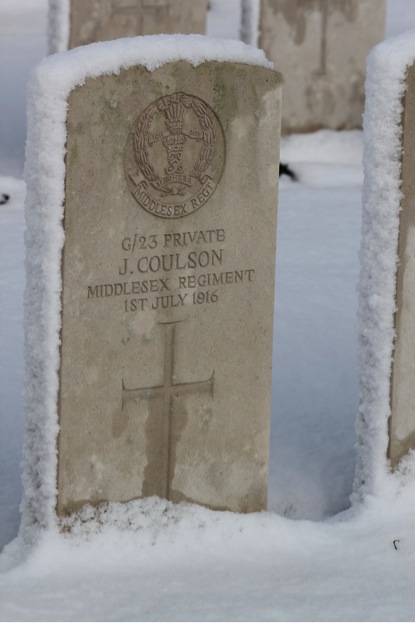 Well done Claire, it's facinating to bring a bit of family history to life. We intend going over to France and Belgium again to the war graves, we will visit great-great uncle Joe while we are there.

I was really touched seeing the article about Joe.
He was my great great uncle and to see his grave really means a lot. Thanks, John.

Thank you for writing such a beautiful article, it really makes me feel very proud that this story has been told. I'm looking forward to our next visit, and this time we will be bringing Joseph's great, great grandson over for his first visit to the Somme.