Posted on 31st July 2015 by Julie and David Thomson in General News.

Another busy month here at No.fifty6 as summer gets into its swing. This month we reflect on the 1st July commemorations, the passing of a friend, improvements to no.fifty6  and an Australian remembered 99 years after the Battle of Pozieres.

We attended the Lochnagar Crater memorial ceremony on a hot summer morning. Julie read a poem  - High Wood by Philip Johnstone written in 1918.

Due to the high number of visitors expected for 1st July 2016, the crater ceremony will be ticket only as will the Thiepval ceremony. Please follow this link for further information and how to register for the Thiepval event.  We currently get about 3 enquiries a week from people looking for accommodation for 1st July 2016.

On 1st July the new nurses’ memorial bench was unveiled during a ceremony attended by Sue Robinson and the "Wenches in Trenches" dressed in period nurses’ uniforms.  Sue and the team had the idea for a nurses’ memorial and have raised funds to make the idea of a memorial a reality. It is the only nurses’ memorial on the Western Front. A work of love and dedication, the bench has been hand-crafted by Vin Felstead. Vin brought the bench over from Yorkshire in pieces and then assembly in our garage took a week of long hours before transportation to the crater. It is placed in a spot where you can sit and have a moment’s reflection looking out to the British Front lines across fields now so peaceful. 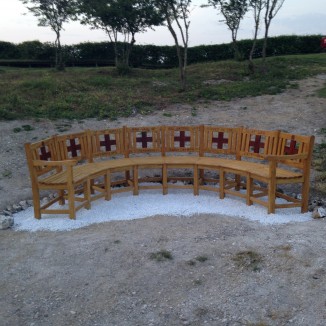 There followed a short service of dedication as the RAF Mountain Rescue Association stone was unveiled by Brian Canfer, Chairman of the RAF MRA along with Andrew, the RAF Padre from SHAPE. After the ceremonies, the Mountain Rescue lads and their wives, on their 50-seater coach, stopped by for a picnic on our front lawns and a cup of tea and coffee, much needed after a thirsty, hot morning. We’ve never had a 50-seater coach in our courtyard before so it was a challenge through the gates! Brian Canfer generously left us with the RAF flag which was used to veil the stone ahead of the inauguration. We have also been sent a link to a short film about the Stone’s journey. Please follow the link to view it. It is worth making a cup of tea and taking 20 minutes to watch it. 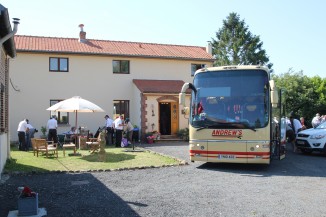 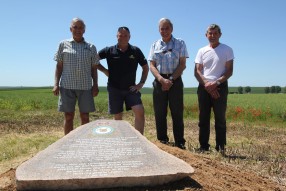 The arrival of the Lochnagar Stone

One sad piece of news.  Les Disbrey, friend, gentleman and treasurer of the Friends of Lochnagar sadly died on 3rd July 2015. Les had attended the 1st July commemorations and had dinner with Friends in Albert that evening before being taken ill at his home in Contalmaison. Sadly Les passed away peacefully a couple of days later in Peronne hospital. We attended his funeral which was held in Contalmaison church attended by his family, friends from near and far. Les was one of the true gentlemen and Richard Dunning, owner of Lochnagar, read a fitting eulogy at his funeral. Our thoughts remain with Renee, Les’s wife and his family along with the villagers in Contalmaison, where Les and Renee have been part of life for many years.

We have been notified that we have been awarded Trip Advisor Certificate of Excellence status for 2015, alongside our Travellers’ Choice award from earlier this year. Thank you to all our guests who leave such lovely reviews. It means a lot to us to know what we do is appreicated. We have also been accepted, after inspection, as a Somme Battlefield Partner which is a network of quality service providers on the Somme. So, our Somme Battlefield Partner sign, alongside 2 new metal silhouettes made by our friend and tank builder Ian Mould, hang on our gatepost. 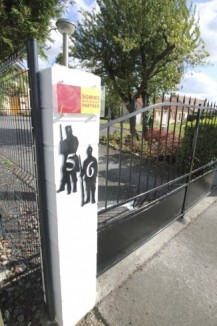 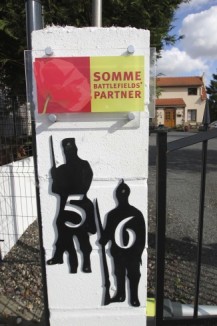 We have also had our perimeter security improved. New fencing at the front, new electrically operated gates and the field at the side of us is now closed off with a lockable gate. Not that this is a high crime area, but we want guests’ vehicles and the house itself (not forgetting Sparky the tank) to be as safe as possible. The work was carried out by Raymond, a local artisan. We are very pleased with the results.  David enjoys playing with the electric gates.

Last week we had a lovely family from Australia to stay with us. Geoff and Cheryl Nougher, and their daughter Ellen, made the long journey from Melbourne to follow in the footsteps of Geoff’s Great Uncle. With David’s help, Geoff found the spot where his great uncle Frederick Douglas Smith fell on 26 July 1916 on the very day, 99 years later. Yong Frederick died in the Battle of Pozieres and has no known grave – his name is on the Australian Memorial at Villers Bretonneux. Geoff, Cheryl and Ellen held a small service for Frederick in the field where he fell and later in Sunken Road Cemetery, Contalmaison where there is an unknown Australian soldier buried. Geoff very kindly has let us relay his story. These are the words Geoff wanted to read out on the day, but with a trembling voice, asked Ellen to read it for him.

“We came here today to remember Frederick Douglas smith, who was killed here at Pozieres exactly 99 years ago today fighting with the allies in WW.  Fred was the eldest child of Charles and Annie Smith from Stawell in Victoria Australia. Fred was also the loved brother of his 3 other younger siblings, Lily, William and Alex.  We cannot imagine the grief and sadness that Fred’s family suffered on the news that he had been so tragically killed in action in WW1. Fred was just 21 years and 2 months at the time of his death on 26 July 1916. He had only just been promoted to the rank of Lance Corporal and was in the 5th Battn of the AIF. From the records on Fred’s file he was clearly very popular ad loved by his family and the mates he left behind in Stawell.

We of course, never met Fred, and until this year had not even seen a photo of him, but from the research this year and the documentation that has come to light we have developed an affinity and love for him. It is just so sad that this young man and thousands of other Australians and Allies lost their lives in their prime. From the reading of Fred’s letters to his family and friends whilst he was in camp at Broadmeadows, from the ship he was transported on to Gallipoli, from the theatre of war at Gallipoli then during transportation to France and subsequently his placement in France, we can read that Fred was a typical Australian bloke of his day with dreams and hopes and aspirations for the future. Sadly Fred was not able to live to have those hopes realized. We know he had at least one young lady from Australia who was very fond of him and had sent him gifts while he was at war. We will never now what might have eventuated if he had returned safely to Australia and had the opportunity to maybe marry his love and raise a family as did his other two brothers. So on the 99th anniversary of Fred’s death we may be the only family that has been able to come to this place to honour Fred and give our thanks for what he did to give Australians of our generation the freedom that we now have. Fred did not have a funeral which was attended by his family, friends and mates, but hopefully by our visit today and expression of our love ad gratitude to him this may in some part make up for the sad lonely burial that Fred must have had. We believe Fred probably now rests in this cemetery as he was killed at Pozieres. It is however likely that years ago Fred’s brother and his wife Erica may have visited this place to remember Fred.

We leave here today something from Australia – a memorial 20-cent coin and also flowers. We now leave this place having been able to visit the final resting place of Fred and offer thanks, love and gratitude from all members of the family.

Goodbye young Fred. May you continue to rest in peace with your mates in this lovely place! Lest We Forget. “ Geoff Nougher. 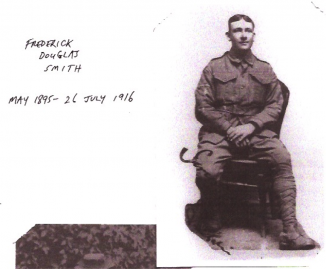 The disruption at Calais has been well reported in the UK and French press.  Our advice to travellers us to keep an eye on travel reports and, especially your ferry or train company websites and updates on social media. With something of a Dunkirk spirit, our guests have made it through and have had safe onward journeys. At the moment it is particularly freight traffic which is affected.

Along with the disruption at Calais we are sorry to have to warn guests that there are unscrupulous people on the roads. In recent weeks, guests with British number plates on 2 separate occasions have been flagged down by another motorist. A man gets out of the car, well dressed, nice car and says he is desperate for money in order to get his family home as he has had money/cards stolen. He presents a business card (fake) and offers a gold necklace as surety in exchange for cash. This is a scam so please do not enter into conversation with him and certainly do not give him anything. The authorities both here and in the UK are aware. He gives a business card bearing the name Abraham Mustafa, but of course may change identities.

The chickens are doing well – though we do have a broody Brigitte at the moment who just wants to sit on eggs and have chicks! She is not happy when the eggs are taken away each morning.   The other 5 are laying an egg a day which quickly make it to the breakfast table! 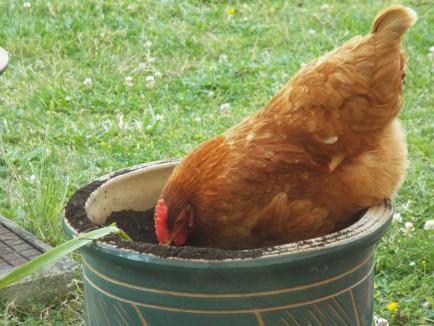 Read your newsletter with interest about happenings and progress. Thankyou for offering to publish the story about Fred. Our visit to France has been a long thought about venture and being able to honour Fred through your assistance was one of the most rewarding parts of our trip.

Fantastic stay at 56, Phil and I had a really memorable time. I am now home in Stafford and Phil? Well he is in the Alps, he will not be back in Crewe until 13th August.

Thanks for keeping us up to date on the goings on at No. 56. Awards so well deserved!

How things are moving ahead at your abode. New fence and now even a 50 seater. Bet the tank feels pushed out !!

But I admire the way you are developing the "business" although you made it feel like home from home when we came in April.

Glad the ladies have settled in well and are producing some tasty eggs to go with those anaemic French sausages !!

What a sad story to read about Fred. But eventually he has been visited and honoured in the same way as our relative was at Mametz.

I would hope to come and see you again in the not too distant future.

the numbers looks great . im sure the gates are to keep tourists safe from Sparky !! :)

A 50-seater coach on the driveway and tea and coffee galore, well done No.fifty6!
Congratulations on your Somme Battlefield Partner award, so well-deserved.
And a special mention to a special man, Vin Felstead, he has produced a wonderful memorial.