Men At Work Supporting the Men Who Fought

Posted on 28th February 2015 by Julie and David Thomson in General News.

We have still not come down from our legal high having been awarded Tripadvisor Travellers’ Choice Winner status last month. The picture is of Julie being presented with our Winner’s plaque with our Commune Maire Christian Bernard (2nd left), Eric Sztubel, Adjoint and Marie Wallet from the Maire's office. The plaque is now on display at No.56 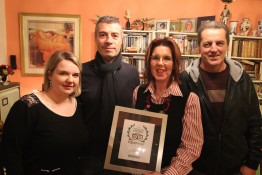 This month there are feverish works taking place around The Somme at key landmarks as the region is at the centre of Centenary commemorations.

The past month has witnessed the Commonwealth War Graves Commission (CWGC) replacing worn and damaged headstones in both Ovillers and Devonshire Cemeteries. At the Devonshire Cemetery Captain Martin and Lieutenant William Noel Hodgson (The Gentle Poet) have the new Botticino headstones which appear particularly bright in sunshine in comparison to the surrounding Portland Headstones. Outside the cemetery boundary a number of trees and a large amount of undergrowth have been cleared which now gives this special place an increased light and airy atmosphere in front of Mansell Copse. 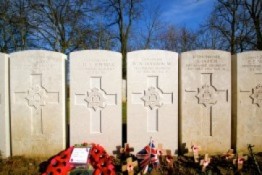 Meanwhile at Ovillers Cemetery (which we overlook) the 3 soldiers whose stories we recount – Privates Coulson and Nugent and Captain Lauder have kept their original stones whilst 150 of their comrades are having their headstones replaced as they are damaged or hard to read. The amount of work and dedication by the French team carrying out the work is exemplary and to be applauded. 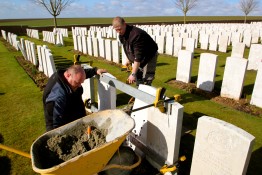 If you ever come across CWGC teams working when you are in a cemetery please engage with them as they are so accommodating and proud of the work they do.

We are frequent visitors to TVC and are pleased to announce that major construction is underway where a brand new major exhibition hall and interpretative centre is being built alongside the existing building. Once we have the authorized details from TVC we will announce the new exhibits which will be shown from July 2016. Work is currently underway at the site with trees being removed and goundworks undertaken for the new building. Access to the memorial via the main pathways is subject to change at short notice at the moment with alternative access paths in place. 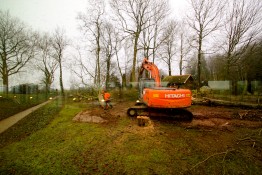 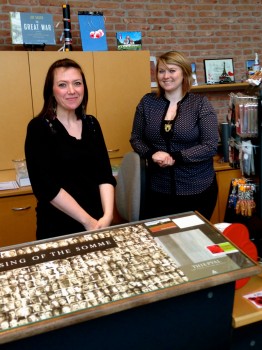 Groundwork underway at TVC - and Celine and Lisa, ever helpful in  TVC

Work is due to start in mid April to widen the access road to the crater along with the construction of a permanent car park for 15 cars and 6 coaches as well as a turning circle. The work is scheduled to take 3 weeks to complete during which time vehicular access to the site may be difficult. The €200,000 cost of the project is being funded by the French equivalent of the Local Authority – Le Pays De Coquelicot. Richard Dunning who owns the Lochnagar Crater site has provided part of the land at the crater to accommodate a turning place for coaches. No funding has been received from any British Organisation.

The proposed turning area at Lochnagar

We are delighted to have discovered a new map of the Somme Battlefield by Richard Chandler, mapmaker and Somme enthusiast. The map offers a unique view of the Somme battlefield and is helpful in showing the relative positions of places and the battlefields as well as monuments and cemeteries. We were so impressed with the map we have them for sale with us at €9.95. Whether a new or experienced visitor, we think the map is a useful addition to your explorations. We carry one in our camera bag. 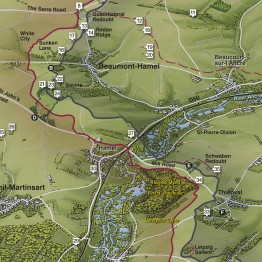 Close up from The Somme map

Thank you for a great News Letter and many congratulations on your Tripadvisor Traveller's Award, well deserved Julie and David.

Congratulations so well deserved. Many more to come.

You can hang the plaque with pride for all your achievements since you welcomed your first guests. Your newsletters reflect your dedication to keeping the Somme region forever in peoples thoughts.

Congratulations on your award

Congratulations on the Trip advisor award. I imagine this will make it even more difficult to get free dates to stay with you now!
Looking forward to seeing you later this year, sometime -somehow.
Tim

Keep up the good work. Living some way off, your news letters keep me up t date with progress in the area.
Kind regards

We are coming to stay with you in August, along with Chris Perkins and his wife. I had an uncle who served and sadly died in the Devonshire Regiment, so am interested in your work at the Devonshire Cemetery. My uncle is buried at Tynecott. We are looking forward to our visit and staying at No 56.

Wishing you continued success. I keep remembering Stephen & mine few days at No. 56 and the dinner on our last night! Award so deserved.

As always your letter makes brilliant reading and I look forward to receiving them each month, remember my visit it to you very often, keep up the good work.
Best wishes
Frank.