My Act of Remembrance - Rees Aged 7

Posted on 22nd April 2014 by Julie and David Thomson in General News.

Many things inspire us  at No.fifty6 – the history, landscape, nature, people -  but  it was a 7 year old and his heartfelt acts of remembrance which have left a lasting impression on us recently.

In April we welcomed 3 generations of the Harker family to No.fifty6.  Grandad Jim and dad Mark had stayed with us before, but this was 7 year old Rees’ first visit to The Somme.

When he arrived Rees produced a booklet of laminated papers and a box which he had brought with him, and which moved us to tears.

Rees Harker is 7 years old and lives in Cowes on the Isle of Wight, very close to the sea. He is very proud that his dad is a volunteer for the RNLI.

On his way to school each morning, Rees passes the Cowes War Memorial and he asked his dad about it. It has WW1 casualties on one side and WW2 on the other. Mark explained to Rees that these were local, ordinary lads who went to War in 1914 and 1939.  Together, they researched those who had fought on The Somme and  discovered that of those named on the Cowes memorial, 5 were commemorated on the Thiepval Memorial and 5 had headstones in military cemeteries on The Somme.

Rees knew that he wanted to come to the Somme and he decided to write a message to those Cowes lads who now rest on The Somme.  He wrote the message himself then his dad laminated them along with a printout from the CWGC pages for each fallen Cowes soldier on The Somme.   He wanted to place the messages by each grave.  But he also brought something else from Cowes with him.  In Rees’s own words:

“ Because they can’t come home, we’ve collected some sand and seashells from Cowes beach to bring here and leave for them to remind them of home. We’ve put the sand and seashells in a box and have brought it to France and we will leave some with the message at each grave.”

That weekend of their visit, Rees went round to each of those 10 soldiers and paid his respects with his Dad and Grandad.  Rees says: “At each grave we stood the message up and sprinkled sand and put the seashells on the grave or by the panels. “ 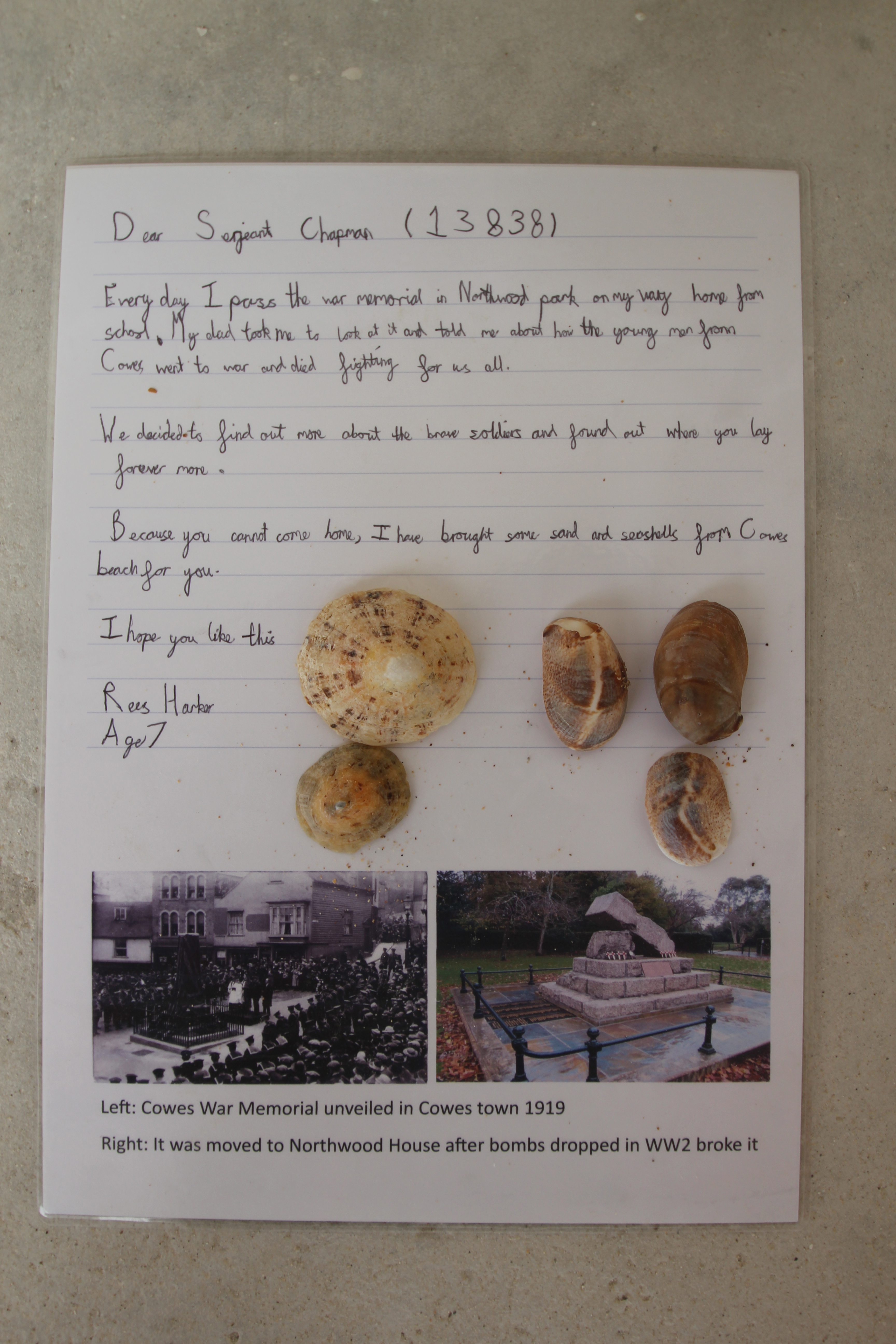 Rees' message to the Cowes soldiers who didn't come home from The Somme.

We were privileged to accompany the Harkers to Pozieres Cemetery where one of the Cowes soldiers is commemorated. 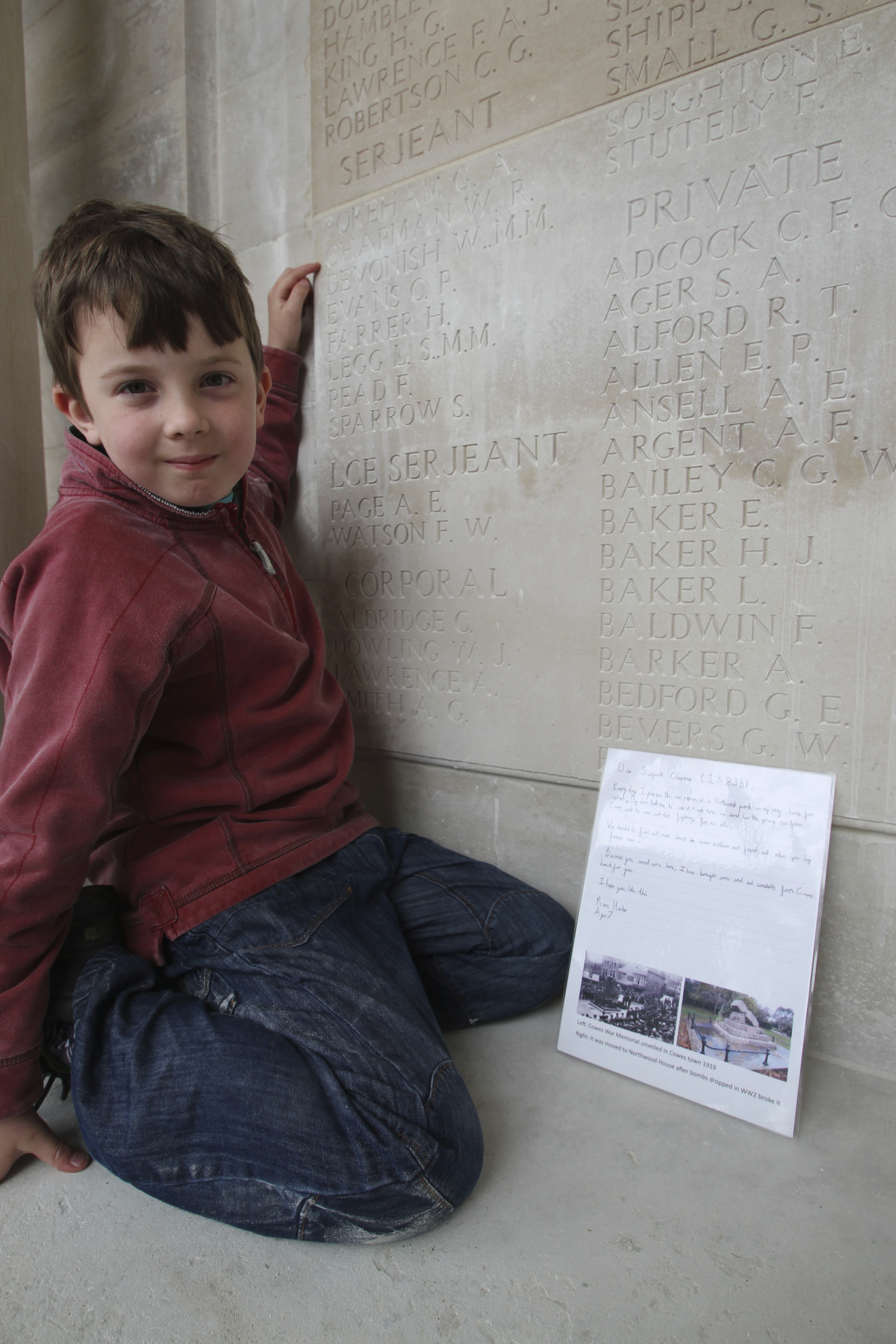 Rees clearly understands the importance of rememberance and now has the Somme in his heart, just as his father and grandad do as well. 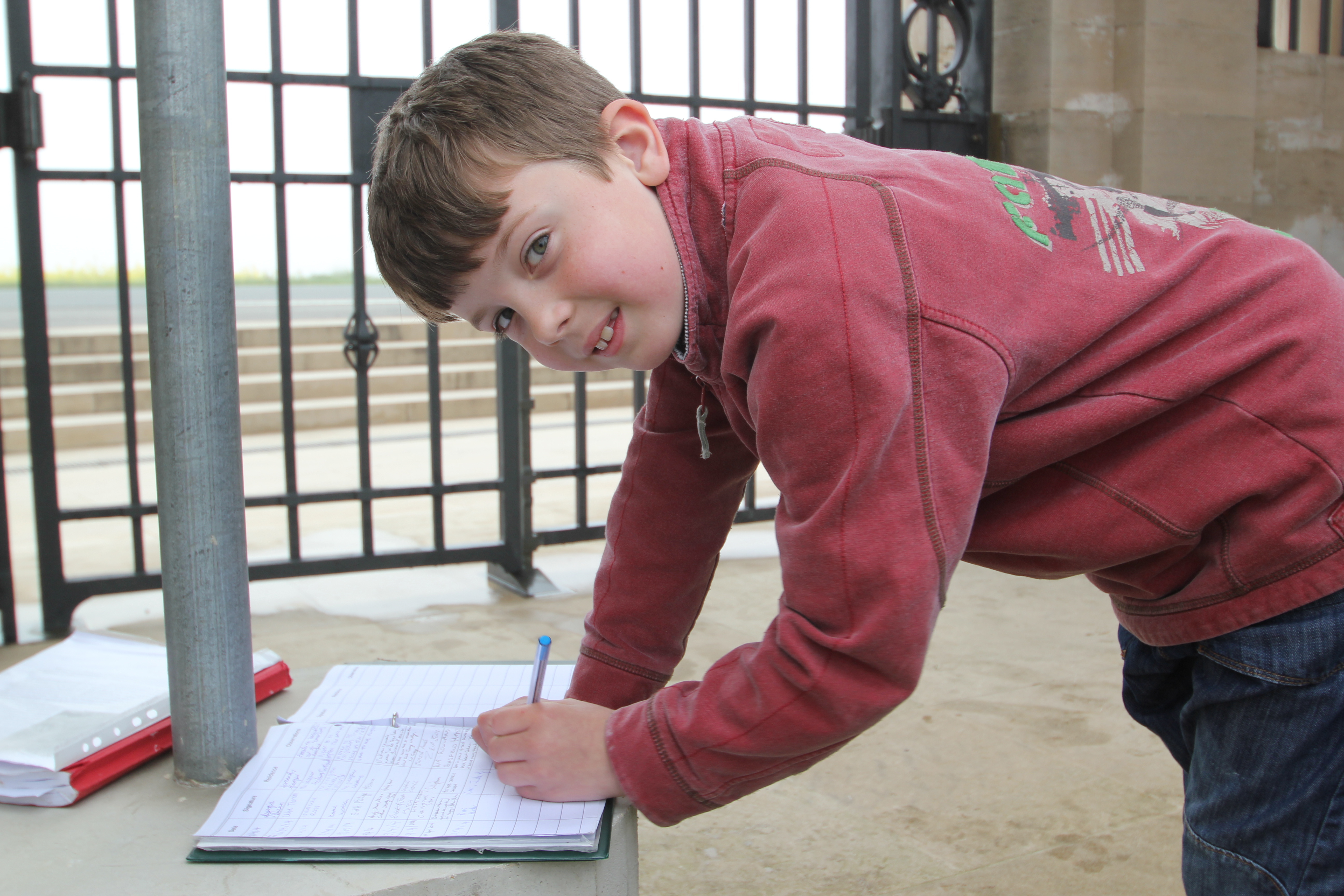 During the rest of his visit, Rees went walking and found some battlefield relics which he was very excited about.  He also visited the Lochnagar Crater which he declared was his favourite place.  When Richard Dunning, the unassuming owner of Lochnagar Crater, heard about Rees’s visit he got in touch to say that the children are the future of rememberance. He has made Rees the first honorary Young Friend of Lochnagar.

We think Rees could be an inspiration to other young people who want to understand the importance of our links with our past.

Two days after writing this article the story was picked up by a UK National Newspaper. Here is the link to the story in The Express. We are so pleased the story has reached a wider audience.

So proud, its featured in the daily express today.

Rees you are an inspiration. A small boy with a big heart. Well done and thank you

I had the pleasure of staying at number 56 shortly after Rees. I friend and I had both read the message left at Thiepval and, as described, it was a deeply moving experience.