Posted on 29th February 2016 by Julie and David Thomson in General News. 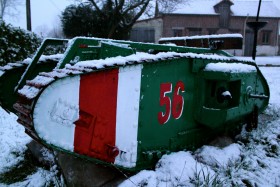 In February we had our first snow of the winter, but also many bright days for exploring.  As we go out exploring the area we have started to see many centenary dates of soldiers who died. Though the Battle of The Somme did not commence until 1st July, in these winter months 100 years ago preparations were being made, trenches dug, tunnels secretly established and of course skirmishes, raids, and shelling took many young lives. We have highlighted some of those who died one hundred years ago on our Facebook page on the anniversaries of their deaths.  We often say, The Somme is not all about 1st July and these young men’s sacrifices throughout 2016 and the rest of the war is testament to that.

Last month we reported of our involvement with Celestin Le Poilu, the marionette who was used in the production of a short film by Vic Productions about the Somme. We have now been sent a pilot of the film (and permission to share it), which can be accessed trough the following link. It is in 2 short chapters, the first featuring the Glory Hole and the 2nd about 1st July 1916 with footage taken at Lochnagar Crater, The Glory Hole and Querrieu Chateau. Working with the production team and puppeteer we could see it was an interesting concept of how to relay the history in a different way.  In the second chapter, David reads the words of Tom Easton, Northumberland Fusilier, who was fighting on 1st July and visited the Somme as a veteran, with many a story to tell and many comrades who fell to remember. 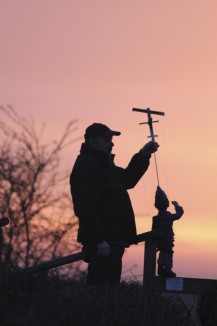 Celetin and puppeteer Laurent at Lochnagar

There is much work taking place around The Somme to prepare for the centenary.

Thiepval Memorial has scaffolding in place around the upper levels but free access around the piers. The Visitors Centre is open with work on the extension progressing. From the 3-25 April access to panels may be restricted or completely closed. Access to the cemetery remains open at all times.

Newfoundland Park/Beaumont Hamel – Currently access to the park is severely restricted due to major works to the pathways, however the Visitors Centre remains open. The work is due for completion by 'mid March' but is weather dependent.

The South African Memorial, Delville Wood is undergoing construction of a new pathway to the museum, progress of the work is again weather dependent and the museum is closed while work is taking place. The pathways around Delville Wood itself remain open. 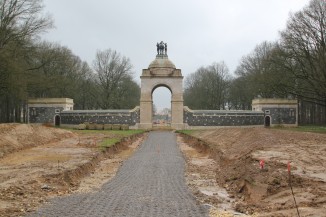 Those visiting the Somme will no doubt have seen the “Iron Harvest” of old munitions that come up through the fields as they are ploughed. We always tell guests of the danger of unexploded munitions that are unstable after 100 years. Leave well alone and report it is the advice we give. Here, the deminage, or bomb disposal, do a great job of dealing with the munitions found. In 2015 the deminage team in Amiens dealt with 46 tonnes of munitions from the two world wars, up on the previous years when they collected 42 tonnes in 2014 and 37 tonnes in 2013. 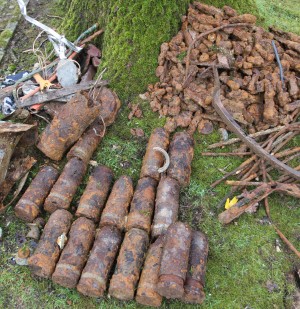 On Thursday 3rd March the French President and UK Prime Minister are holding a summit in Amiens. During the morning they will visit Pozieres Military Cemetery.

We get great feedback about our website but we have made some enhancements (lots of techy stuff in the background we don’t really understand) which makes it more user friendly/responsive for those accessing our website from a mobile device.  Our thanks to Hallway Studios for their technical input.

Our hens had their first experience of snow this month. As they went to bed one evening it was beginning to snow and they woke up the next morning to white all around them. For the first time, they were not happy about coming out of their coop, confused and unsure what this cold, white stuff was. Lifting their feet up very high to try and make it go away. They soon found their feet though and if we had had any more snow we think they would have been building a snowcock! We read somewhere that chickens go back to full lay after St Valentine’s Day – but ours have never stopped laying through the winter. Thankfully the snow did not last and we are back to sunny but cold days. 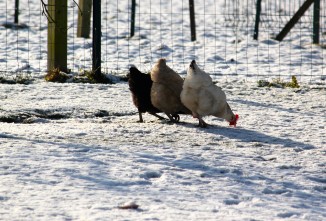 Thank you for another interesting newsletter. I think the marionette film is terrific and your explanations of events are very clear. This reminds me of the time you took my husband Allan, and I to the Beaumont Hamel site and your account of what happened when and where enabled me to properly understand the site after years of frustrating befuddlement!

Thanks again for sharing your site and wonderful research and information, looking forward to your next report on the centenary.
Best Wishes

I look forward to your bulletin and as usual it's full of interesting happenings in and around the area of # 56. I see Chateau Querrieu gets a mention, I trust you gave the Countess my best regards.
Old Sea Dog Weathers Sydney Australia

One hundred years on and munitions are still being un-earthed . . . by the ton. It's good to explore but tread carefully.
Website upgrade works perfectly on the iPhone, an excellent upgrade.

The chicken update is the humor touch! The marionette video is incredible. It should be shown in all schools. Puts history in perspective and in the 'real' world.

Many thanks again for a very informative monthly bulletin,

Many thanks for useful information.

Always look forward to receiving your newsletter and I copy it across to the boys. Kind regards.