November News. We Will Remember Them.

Posted on 30th November 2014 by Julie and David Thomson in General News.

We have had great weather in November. Guests who have come at this time of year have been able to see the landscape in all its glory and have had mainly dry, sunny days for exploring.  Now the sugarbeet is being harvested in the fields and the grass at No.fifty6 has just had its final cut of the year. This month we have been thinking about Remembrance with 11th November at the core of commemorations, but there are forthcoming times to remember too. We also celebrated our 2nd anniversary at No.fifty6.

We had a full house for 11th November and even guests who we couldn’t accommodate popped in for a cuppa and chat, and it is so lovely to catch up with friends old and new. At 10.30 we assembled at the Mairie in La Boisselle then the 100 or so people who turned out paraded to the various village memorials behind 2 pipers and the Standard.   Wreaths and gerbes were laid at each memorial, the exhortation read, and a period of silence. Particularly moving this year was that so many children turned out and sang the Marseillaise heartily at each stop. A short ceremony was conducted at Lochnagar. Julie read a Woodbine Willy poem and a special wreath was laid to honour the nurses and VADs who served on The Western Front. After a vin d’honneur in the village hall we then went to Mametz Wood to remember Harry Fellowes and afterwards to Fricourt German Cemetery where a wreath was laid and the exhortation read in 3 languages. The day ended at dusk with a walk to the Breton Calvary in Ovillers. We shall remember them. 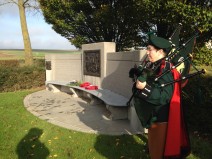 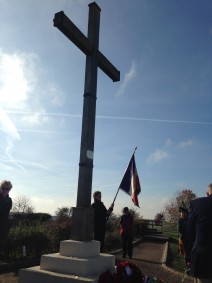 The November 11th visit to the Breton Calvary reminds us of the brave men of Breton who fought here in Ovillers La Boisselle in 1914. On Saturday 13th December 2014 there will be special commemorations to honour the Breton Soldiers of the 19th RI to mark the 100th anniversary of the offensive of 17th December 1914. 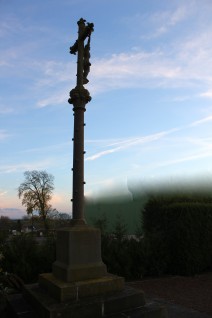 Details in French can be found here:

The afternoon will begin by meeting at Ovillers church at 14.30, followed by a mass.  At 16.15 there will be a contemplation and laying of wreaths in Ovillers Cemetery

17.00 Commemoration at the Calvaire Breton in Ovillers with pipe band and musicians, speeches by the Sous Prefet and Mayors of Ovillers La Boisselle and Landerneau (Brittany)

18.30 Departure of cortege and torchlit procession to La Boisselle

19.15 Assemble at The Glory Hole, choral singing, readings, laying of wreaths and ending with a glass of friendship courtesy of the Commune Fetes Committee and the Friends of L'Ilot.

Details can also be found on our Commune website:

We have attended this poignant service for the last 2 years since we have lived here. The service begins at 19.00 in Pozieres Church for Christmas Songs in 4 languages and a time for reflection. Guests are invited to bring a small dish to share in the village hall after the service. This is an annual event and is usually well attended. It allows a wonderful opportunity for reflection as we enter the Festive season.

You will know that over the last year we have been following the progress of South African Artist Paul Emmanuel’s work - The Lost Men France. We helped with the deinstallation of the banners in October and on his last visit Paul filmed some great footage of the banners in situe as the weather changed.  Paul has now edited a short film about the making of The Lost Men. You will see the painstaking work to make the moulds and embossing which led to the delicate photographs on the silk banners. The film can be viewed by following this link.  Have the volume turned up. 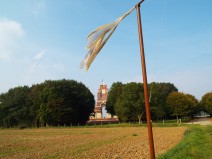 As one memorial is deinstalled another has been installed.  Last November we reported on the proposed memorial to the Bedfordshire Regiment.

Guest of No.fifty6, Ian Mould has worked tirelessly to campaign and raise funds in his home county of Bedfordshire for a memorial to commemorate the men of the Bedfordshire Regiment. We are pleased to report that on 10th November 2014 the memorial was dedicated during  a ceremony at Tyne Cot Cemetery.  The memorial is built from Bedfordshire bricks and has soil from The Somme at its base. The soil came from Pommiers Redoubt where the Bedfords saw intense action. The memorial can be found on the pathway between the car park and Visitors Centre at Tyne Cot. 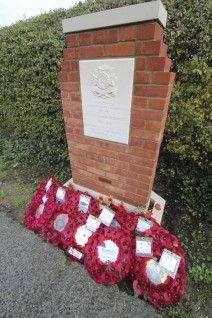 We spent the Remembrance Day at city hall in Toronto. Seemed even more moving this year because of our visit to Flanders and Somme this past June and the incident at the tomb of the unknown soldier in Ottawa just before. I can't imagine what it is like to be there on November 11. Congrats on yeAr 2. And many more