Season of Mists and Mellow Fruitfulness

Posted on 31st October 2014 by Julie and David Thomson in General News. 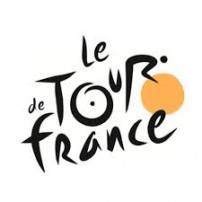 The weather has been lovely in October: misty mornings, warm sunshine by day and very little rain. The crops are harvested, though some maize remains and winter wheat planted.  The landscape is back to its rolling best.

Wear your Poppy with Pride.

With November 11th rapidly approaching, no.fifty6  now has a selection of remembrance items from the Somme Branch of the Royal British Legion. Items available include the remembrance poppy, wristbands, remembrance crosses, including the new humanist version, poppy pins and car poppies.  The items will be available all year round here. Type B poppy wreaths are available with prior notice for a suggested donation of €25, with proceeds direct to the Royal British Legion. 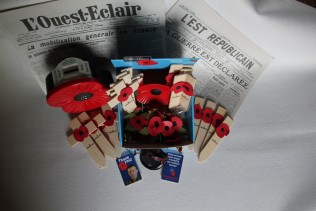 In October we had the pleasure of meeting the Oakden family: Christine and her husband Chris and his father Roy. Pupils at their local primary school in Harby, Nottinghamshire produced a number of ceramic poppies to commemorate the fallen of the First World War. The Oakdens placed one of these special poppies at Heilly Station Cemetery where Roy’s uncle Frank Oakden is laid to rest after he died of his wounds, and one at Thiepval where Frank’s brother Tom is commemorated. The young brothers died within a day of each other in September 1916. 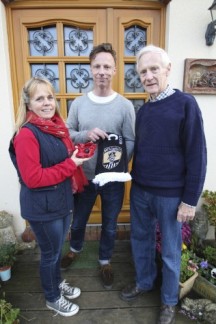 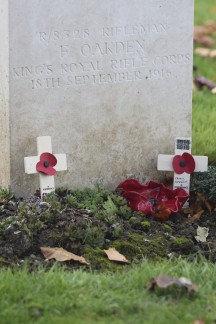 Need to fill your stockings?

With less than 8 weeks to Christmas Day, a trip to visit one of the Christmas markets in the region may give you some new ideas for Christmas presents - from Amiens Macarons to hand crafted Marionettes. With the markets at Amiens and Arras easily accessible from us, why not come over and enjoy a glass of something warm and spicy in the lounge at No.fifty6 after a day spent Festive shopping?

The dates for this years markets are:

Both are accessible by train from Albert or of course by car.

As well as the market in Amiens, the cathedral will be lit up in spectacular colour at nightfall every day of December.

No.fifty6 has recently been accredited with Bronze Level Green Leaders status by Trip Advisor. This is a new scheme to encourage businesses not only to recycle plastics and paper but also reduce energy consumption by using low energy light bulbs for example, and also to use local produce – something we take a pride in here. The photograph shows a week’s worth of recyclables generated by guests at No.fifty6. 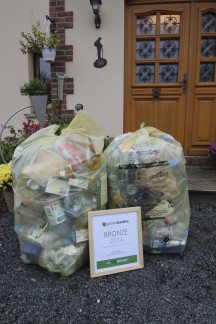 The route for the 2015 Tour De France has just been released and Stage 5 of Le Tour on 8th July will be heading our way. The stage will commence in Arras and finish in Amiens, taking in Pozieres, Albert and Thiepval en route.

Glad you were pleased with the poster and that it has a nice new home.

Ashley, we will email you about the Tour de France.

Just a thought - do you have a room free for 8th July re Tour of France being in your area?
Thanks

Thank you for newsletter,good to b up to date with items of interest to us.Don't think we will be able to wait until 2016 for our trip to France!

Many thanks for your latest newsletter. It always makes an interesting read. I have forwarded it to my Aunt & Uncle who stayed in August. They live in Harby, so the piece about the Oakden's will be of interest to them i'm sure!
Take care & look forward to seeing you both again next year.
Sam