September News from The Somme

Posted on 30th September 2015 by Julie and David Thomson in General News. 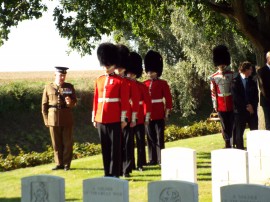 A September of two halves. The first half brought cold, very wet weather and The Somme mud was in abundance. The second half and this week in particular has been dry, sunny with beautiful blue skies. The farmers are still busy in the fields ploughing and the landscape is getting back to a laid bare beauty. The supermoon on Sunday night hung like a large fresh cheese over The Somme fields.  This month there has been a lot to remember. On 11 September we attended the reburial of a Welsh Guardsman.

The reburial of a Welsh Guardsman

On 11 September 2015 at 11am the remains of an unknown Welsh Guardsman were reburied with honours at Lesboeufs Guards Cemetery (between Ginchy and Flers). The Guards’ remains were discovered in Ginchy and despite extensive efforts to identify him, his name remains unknown, though he was identified through his shoulder titles. We attended along with our guests. It was a beautiful morning and the ceremony was well attended, with 4 guardsmen as burial party, the major general of the regiment in attendance along with many representing the Welsh Guards Regiment as well as the French Maire’s from the local villages, and the Sous Prefet representing the French state. A rifle party also sounded the salute. Rest in Peace Guardsman. 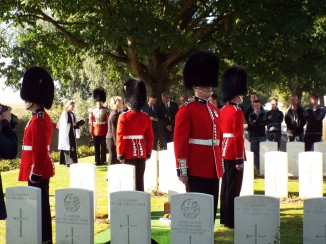 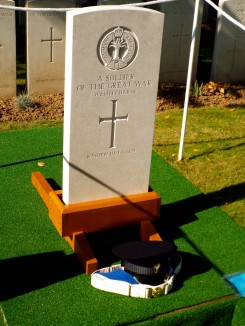 Friends of Lochnagar Bob and Joy Podesta were busy at the crater installing the next batch of Memorial Plaques. Several of our guests have sponsored a plaque and they have now been installed, along with one for Julie’s Great Uncle William Reginald Sparkes of the 13th Essex, who died in the Battle of Cambrai and has no known grave.  Also in late September Vinnie and Lynn Felstead worked at the crater on the Nurses’ Memorial Bench to prepare it for the winter weather. 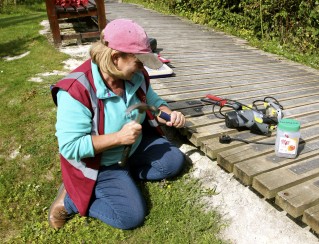 Joy installing plaques at the crater 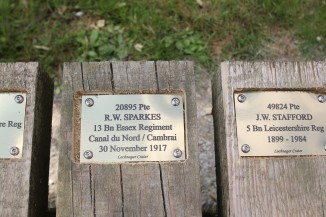 The Battle of Loos which commenced on 25 September 1915 was remembered 100 years on. There were various commemorations around the Loos area remembering the regiments which fought there. It was the first battle where The British Army used gas.  Guest and author Andrew Rawson attended the ceremonies as he feels a special connection to Loos - he started his writing career 10 years ago writing the Battleground Europe Books on Loos, Hohenzollern and Hill 70.   This week, Andrew escorted us around the Loos battlefield which gave us a new perspective to this battlefield just 40 minutes away from us. 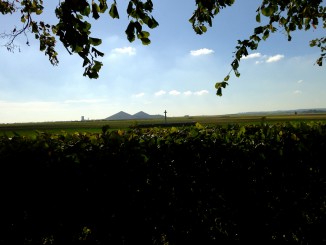 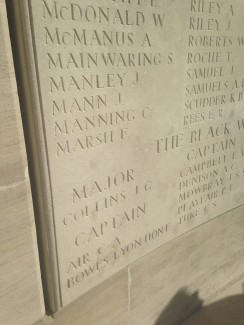 The Loos memorial at Dud Corner where Elizabeth, the
Queen Mother's brother is named as he has no known grave - Captain Bowes-Lyon.

While he was here Andrew went to Thiepval and signed copies of his book The Somme Campaign (The Loos books had sold out!) and he also signed copies for us which we have in stock. 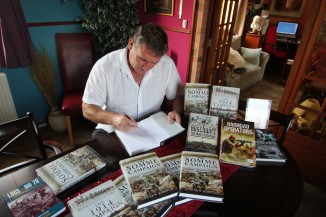 Andrew signing copies of his books at No.fifty6

Plans for the commemoration of The Somme are ongoing. The ballot for tickets to attend the Thiepval commemoration on 1st July 2016 is now open.  Follow the link ifor details of the ballot.

We have been advised that there will be a ring of steel around the area for security reasons so access to events on 1st July will be difficult and areas such as Lochnagar, Thiepval and Ulster Tower will be ticket only.

We currently receive a couple of enquiries a day about accommodation for 1st July, but we are full and we know of nowhere locally that has accommodation for such a key date.   Our advice is to visit before or after the 1st July 2016 when access and travel will be so much easier. The men we are remembering is what is important, whatever the date. -

Work continues on the Memorial which will remain covered in scaffolding through to June 2016 and works are also continuing on the new wing to Thiepval Visitors Centre. 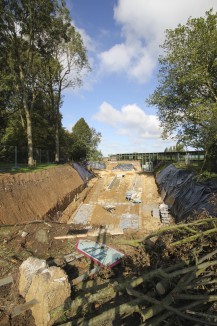 Ground works for the new extension to Thiepval Visitors Centre

In the winter of 2013/14 the remains of 3 soldiers were discovered in the Ulster Tower/Thiepval area. One is an Unknown Cambridgeshire Regiment soldier who was found in a Thiepval garden. The other 2 are an Unknown Royal Irish Rifleman and Sergeant D H Blakey, Royal Inniskilling Fusilier, who were both found while the road was being widened outside the Ulster Tower.

All 3 will be reburied in a ceremony on 8 October 2015 at 11am in Connaught Cemetery opposite The Ulster Tower. 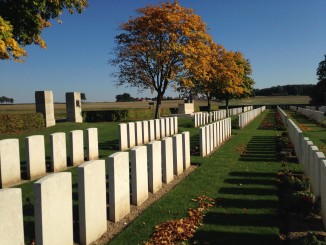 The chickens were not amused by the cold, wet weather which heralded the start of September, but egg production continues at an egg per day per hen – and gorgeous eggs they are too. Joan escaped into the back field last week but was retrieved and the gap under the fence blocked up. We think she has been watching Chicken Run. We have had advice from a distinguished local man that when the nights draw in we should consider moving them closer to the house and installing an electric light if we want happy hens and eggs to continue! However into the house maybe a step too far… 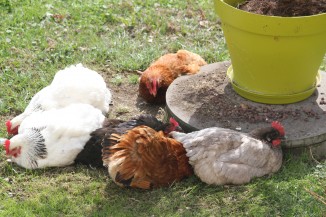 It was good to see you both at our Guardsman's re-burial.
That is the way to start a battlefield tour and Tim PB & I + everybody else were deeply moved.
Just returned from 4 days on the Somme in the most glorious weather.

Lovely to see you both on my recent trip and the info you gave me on the books was a great help. Thank you and your guests very much indeed.
Mike.

Trust a female to manage to get away - good on you, Joan. Beautiful pictures, David, of the burial ceremony for the Welsh Guard and I only wish I could have been there. The new visitor centre extension will be worth a visit oneday. I wonder when it will be finished. Keep up the good work. You are both working so hard to keep us up to date with events. Thank you.

Great to hear the news , keep it coming. See you soon.

SIMPLES !!!!!move the chickens into the house and David into the henhouse.xx

Each newsletter brings me back! Love Joan's antics-Hey chicken with her own path.
Do you have any photos of the supermoon on the Somme? I'd love to see them. We had cloud cover & saw nothing

Details for Lochnagar have not been published yet but it is unlikely to be a ballot but an application from later this month and numbers will be limited. Keep an eye on the Lochnagar website www.lochnagar.org. For the Ulster Tower we do not have specific details yet. We will update developments in our newsletter.

Hi, Many thanks for your great newsletters, i note that you mention 2016 regarding ticketing, i have entered the ballot however i was unaware of the tickets required for Lochnagar and Ulster tower will this also be a ballot? and if so how can we apply
Kind Regards Gary

On our most recent visit, a few weeks ago, we were privileged to attend the reburial of the Welsh Guardsman at Lesboeufs Guards Cemetery, an exceptionally moving event.
Our next planned visit to No56 is during summer next year, however, our thoughts will be focused on next week's reburial of the remains of the soldiers discovered just over a year ago. Sadly we cannot attend this time.
Once again No56 looked after us during our stay and we can confirm the early September rain . . . we had to shelter at the Australian National Memorial at Villers-Bretonneux, along with other visitors until a thunderstorm and prolonged torrential rain ceased. At times like these our imagination takes over as we attempt to recreate in our minds those winter conditions endured by thousands during the battle of the Somme.
On a lighter note thank you Julie and David for another wonderful visit; another informative newsletter, and making us laugh at Joan's adventures. See you next year.

1 day ago we said:
A strange ethereal autumn light in Delville Wood this afternoon. The faded photo on the tree is a tribute to Rifle… https://t.co/UNIdQnSztT