Posted on 31st August 2016 by Julie and David Thomson in General News. 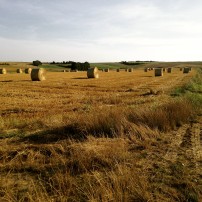 Thank you for all your comments about last month’s newsletter. Many have asked if we have a photo of Neil at Delville Wood who we met on that misty dawn morning in July. We don’t have his photo or details as it did not seem appropriate to take a photo on such a personal pilgrimage for him.

August has continued to be busy here at no.fifty6 and we have been inspired by the ongoing personal pilgrimages our guests from the age of 4-84 make in this Somme centenary year.The weather has been very hot in the second half of August (36 degrees all last week) and the farmers have been busy harvesting.  Now we have returned to a more manageable 26 degrees! So what has been happening this month?

While the 1st July is indelibly etched in the psyche as the first day of The Somme, remembrance here is everyday. Each day of the Somme centenary is a day of reflection for someone as family members are remembered. This month we have had many guests who have made their own poignant personal pilgrimages to The Somme to remember. We feel very honoured to play a small part in helping families who wish to pay their respects at a specific place or specific time. This month, Terry Whenham (a frequent visitor who tirelessly raises money for the ABF Soldiers’ Charity) stayed with us while he remembered his Great Uncle Henry Whenham, who was mortally wounded in the fields above Ovillers towards Mouquet Farm. We accompanied Terry at 11pm on 3rd August, the time his company of The Buffs went over the top. Our other guests attended too as we held a candlelit vigil. 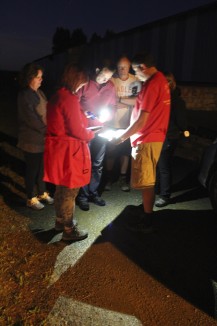 Sarah Cayley came with her husband Mark and 2 young sons, Charlie and George to remember her great uncle Oscar Franklin who is remembered on the Thiepval Memorial. David took Sarah to the place in Guillemont where he had been on the day he died. The family attended the service of remembrance at Thiepval where they laid a special lovingly made tribute to Oscar and 2 of his brothers who also died – Vivian and Sydney Franklin are commemorated on the Menin Gate. None of the 3 brothers have a known grave. Sarah has Oscar’s Bible which is cherished by the family and was taken to Thiepval too. 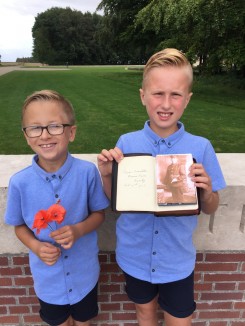 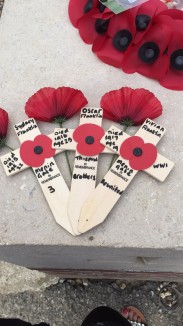 Charlie and George with Oscar's bible at Thiepval

The personal pilgrimages continued with Jan and Peter Hetherington - they came to remember their great uncle and grandfather, again visiting with David where great uncle Edward Hall fell.

Irene and Phil Shute came from Australia to remember Phil’s grandfather killed in Pozieres on 9 August 1916.

Martin Howard came with his father and 3 daughters to remember his grandfather who went over the top on 12th August with the Kings Liverpool Regiment in an attempt to take Guillemont.

Gerald Abbotts came with his son in law Dave to remember his grandfather Joseph Doherty of the Northamptonshire Regiment, killed at Guillemont and buried in Serre No.2 cemetery. Gerald made daily visits to the spot where his grandfather was killed while he stayed with us and on the centenary of his death toasted his grandfather at the site where he was killed and initially buried before his later reinternment at Serre.  While in  the fields Gerald and Dave met another young couple who had come to remember a relative. While in Guillemont the young man proposed to his girlfriend! The Somme excerpts a strong influence on all who visit!

Each and every family who came to us in August were moved by what they saw and felt. We were also contacted by a family in Australia who could not be in France for the centenary of their ancestor’s death so we visited Courcelette on their behalf and laid some green and gold flowers.  Each night we have raised a toast around our table to those absent friends who are no longer with us. We like to think that those men who now lie in the fields of France would be so pleased to know that they are not forgotten 100 years on. Indeed it seems the years only make our bonds to the past and our gratitude for their sacrifice stronger.

The weekend of 7th August also saw the centenary commemoration for the aspiring composer George Butterworth. With Morris Dancing (Butterworth was a founding member of the Morris Dancing Association), The Amiens Brass Orchestra  and a wonderful rendition of his songs from a Canadian tenor. 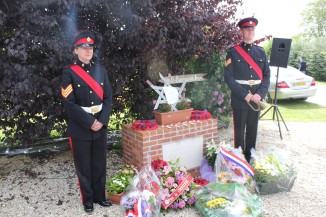 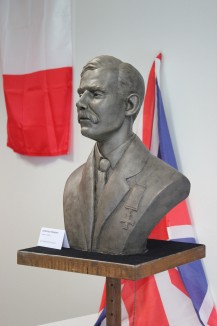 Students of the Military School of Music pay homage to George Butterworth, and a new bust of the composer.

A reminder about the daily service at Thiepval which will continue until 18 November, marking the 141 days of the battle. Commencing at 11.45 there is a short service of commemoration and the last post is played. It is open to all and you can just turn up and attend or register to attend to lay a wreath etc.  We have had really positive feedback about this daily event and we think it manages to hit just the right tone of respect, informality and poignancy.

Sebastian and Gregory have been on the case this month continuing with our renovations. Today 1.2 tons of concrete has been mixed and poured in supporting pillars and the balcony area. All in 26 degree heat (last week was too hot for concrete!)  Work has started on putting in a new first floor and walls have ben knocked down, and the uneven ground floor taken up brick by brick. Our fishpond has been moved to a new location and all the goldfish and koi survived their eviction and rehoming! There is still much to do but we are pleased with progress. Guest Martin Howard helped knock down a wall and hit his thumb with the sledgehammer in the process. Luckily thumb and sledgehammer are both now fine. 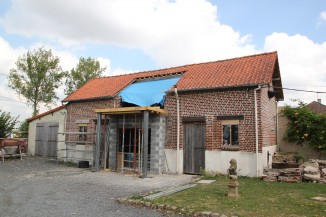 Some eagle-eyed guests spotted us on Sky News in the UK in early July. We were approached to help with our local knowledge as Sky covered the story of 2 men who were killed on 1st and 2nd July at Lochnagar Crater, fighting with the Tyneside Irish. Sky brought the grandsons of the 2 men killed to visit the Somme, see where they attacked and their final resting places in Ovillers Cemetery. The commanding office of the Tyneside Irish, Lt Col Howard was shot and Sergeant Butler went to his aid, only to be shot too in the process.  This still from the feature shows us in in he fields where the Tyneside Irish approached from Tara Hill towards Lochnagar Crater. 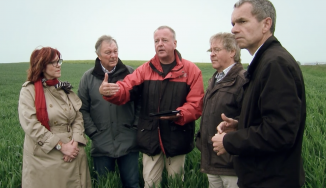 We have reported before that Bruno Sauty, singer songwriter from Vignacourt has written a wonderful song inspired by this region called Terre de Combat (Earth of Combat). We helped Bruno translate the song into English and he performed both versions in front of the Governor of New South Wales in Pozieres. He has produced a video montage of the performances of the song. Bruno, now a friend, visited us at the weekend and we have signed copies of his CD for sale and the song is also available to download. 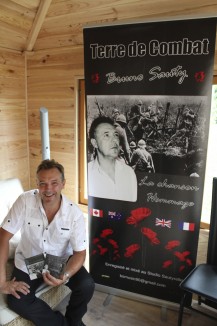 We now have for sale some special centenary pins of The Windmill (Moulin) of Pozieres. Sale of these pins will help with the proposed rebuilding of the windmill. The purpose of the Windmill Reconstruction Project is to reinforce the identity of Pozieres, increase the cultural heritage of the region and maintain the memory of the soldiers fell in the fields of Pozieres. The pins cost €5. 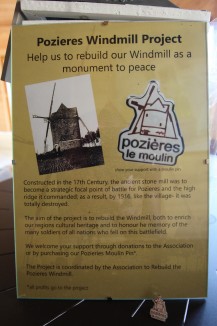 Moulting has stopped but egg production has not increased despite seemingly happy chickens. They certainly do not like 36-degree heat so a slight cooling may see egg numbers back to previous levels.  And if Joan does not stop coming into the Garden Room to converse with guests as the doors have been left open in the hot weather, it may be chicken pot noodle for dinner! 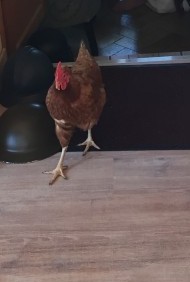 Would you still have copies of Bruno Sauty's CD for sale?
I heard him sing the song live at the Son et Lumiere last year: a very fitting tribute ! We were there with the English Folk Dance Society.
Thank you
Ian

Thanks for yet another great update! :-)

Thank you once again for joining me on the vigil for my Great Uncle on 3rd August. It was an experience I will never forget, especially with the sun going down over the horizon.

Can't wait for my next visit on 17th September. I have never stayed anywhere that felt just like home - many thanks to Julie, David and the hens. My great uncle 'got his' on 15th September 1916 over at Ginchy so that's where I will be on 18th.
Fried chicken is ok with me!

this newsletter brought tears to my eyes. Thank you so much for your continual stories. So lucky to have stayed with you a couple of years ago

Lovely stay as usual (albeit brief this time).
Girls really enjoyed it as well.
Keep the newsletters coming always interesting to hear the individual stories and news.

Once again a very informative news letter. Many Treasured memories of our stay with you, especially around the dinner table, Thank you for a wonderful stay ,and all the help finding where my grandfathers body was found , so I could plant a cross and drink a toast to him on the centenary of his death.

On a lighter note, congratulations to the happy couple.

PS: we're on Sal and Chris's side, Joan is not for the pot!

Just to let you know that I have booked to attend the Thiepval memorial service on Tuesday 27th Sept, the 100th anniversary of when my great uncle was killed (not very far from the memorial site). My nephew and I will lay a wreath in his memory.

Poor Joan!! Don't you dare put her in the pot!!! Looking forward to seeing you all on the 11th. Any shopping you need? X Chris &Sal X

1 week ago we said:
Thank you Andrew we are so glad you had a good trip and we have 3 new members of the @Number56BandB club! It was a… https://t.co/IGetP18cG9