Somme Commemorations and Other November News from No.fifty6

Posted on 30th November 2016 by Julie and David Thomson in General News. 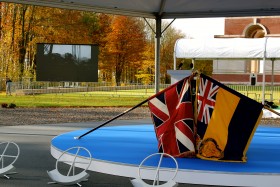 The Somme Centenary has continued to inspire family of those loved ones who served and returned or served and died on the Somme to visit from near and far, as well as those with a general interest in the events here.

November 1916 saw the final offensives of the Somme campaign in weather which was cold and wet, and even snowy on occasion. Trenches and the ground were muddy, and conditions were terrible. It is one of the reasons why fighting stopped when it did. It was unbattleable.

One pilgrimage stood out for us in November.  A family from Australia (Gerry, Gill and 4 year old Lawrence) braved the cold weather to go on their own personal pilgrimage. Gerry made a visit to The Somme a year ago to follow in his great grandfather’s footsteps with the 33rd AIF.  These now are Gerry’s own words (we’ve changed names to protect anonymity):

“My first visit was a moving experience filled with many poignant moments.

After returning home my wife Gill, who was adopted as a baby and has no real interest in military history, ramped up a lifelong search for her biological mother.

She finally found her, suffering from terminal cancer, in January.  She only had the chance to meet her biological mum once before she died.  However she did learn a lot about her origin and family background.

Among the detail is the fact Gill’s maternal Great Grandfather was Sgt Victor Dixon of the 23rd battalion AIF.

He was in action at Pozieres in July 1916, won the Military Medal for his deeds at Bullecourt in May 1917 and received the Distinguished Conduct Medal for leading the raid that liberated Ville-Sur-Ancre in May 1918.

Victor's legacy and the things he endured have cast a long shadow.  From what we can garner it most likely led to fractious family relationships on his return and even some of the circumstances that led to Gill being put up for adoption.

I think Gill is starting to realise that World War 1 was not an abstract event, but something that still reverberates today.  It is central to her own story and ours as a family.”

So the family went out with David to retrace Victor’s time here. It was a moving time, especially for 4-year-old Lawrence who laid a cross at each of the key places where his Great Great Grandfather fought. Each time (at 4 years old) telling the adults to back away as he wanted to do it privately.

We also give a big cheer to Dave Kildea who visited us earlier in the year on his family's pilgrimage. When he stayed with us on the Somme, Dave went runnning everyday as he was on a mission to run each day of the 141 days of The Somme Battle and raise money for the British Legion. We were so pleased to hear that Dave completed his 141 day challenge and provided a photo montage of his journey. In the process Dave has raised  £1800 for the charity. 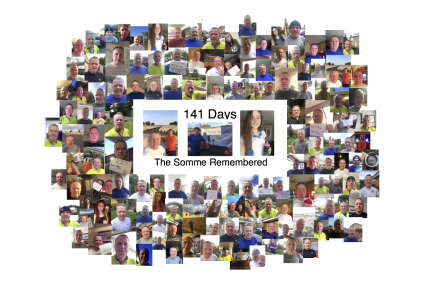 We like to think the men of 100 years ago would be proud and humbled to know that today’s generation recognizes their sacrifice and still remember, often with emotional personal journeys being made. Lest We Forget.

November 11th was a cold but dry day and many British joined the French led commemorations. After meeting at Ovillers war memorial we processed to Ovillers Military Cemetery and to the Breton Calvaire where the village children read poems and sang La Marseillaise. Onward to La Boisselle and wreaths were laid at the war memorial, the 34th Division Memorial (La Madelon) the 19th Division Memorial and the Tyneside Seat. At La Madelon, at our Mayor’s request Julie read in French and English some words of Thomas Easton,  Northumberland Fusilier, who was here in 1916 and visited many times as a returning veteran. There is a memorial stone to him at Lochnagar Crater as he was at all the Lochnagar commemorations until he died – each time visiting his “mates” who did not return home.  He would have stood at La Madelon just as we did lost in his thoughts. 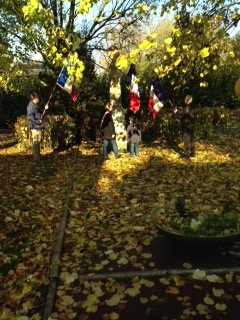 After a “verre d’amitie”  in the village hall we then walked to Lochnagar Crater where a short service was held. Julie read a poem and a new memorial stone to Women in War was unveiled and dedicated, thanks to the fundraising efforts of the Wenches in Trenches. We then went to Mametz Wood for a short service at the memorial stone for Harry Fellowes where a wee dram of whisky was shared by those there as it always is. We ended the day as dusk approached at Fricourt German Cemetery where we all joined hands around the memorial stone.  It was a poignant way to end the 11th November commemorations.  We will remember them. 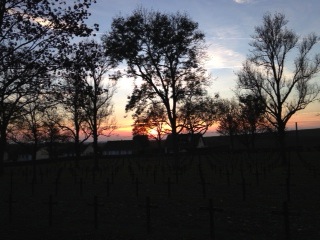 On 18th November we, along wih our guests, Sally, Chris, John (from Canada), Alan and Sam, attended the Battle End commemoration at Thiepval. The weather had been terrible the night before, very windy with rain and the organisers took the decision to remove the covers from the seating areas in case of further violent winds. The day was cold but bright as we boarded shuttle buses at Albert station to go to the ticket only Thiepval event. Everyone was thoughtful but in good spirits as we thought about the 141 days of the Somme battle and what the 18th November represented. The event was well organized and though bitterly cold as we made our way to the seating area the sun shone. It was a drumhead service in front of Thiepval memorial. As the dignitaries and padres arrived, the wind whipped up and the heavens opened. For the duration of the Service it poured with rain and we had no shelter but for our coats and hats. In a way this only added to the poignancy as we remembered the events of 100 years ago, the men cold and muddy in their trenches. Wreaths were laid on behalf of The Commonwealth, France and Germany, prayers said, readings and a short homily. As the army band played (also drenched through) the final hymn the rain suddenly stopped and the sun returned. The wreaths were carried by current servicemen to the Great War Stone underneath the Thiepval arches. Alan our guest, turned to me and said “it was appropriate it had rained as it did, It was like the tears of a million men raining down on us.” We couldn’t agree more. 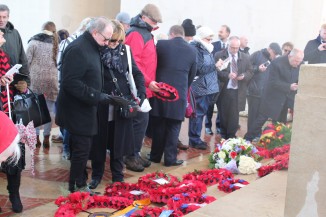 That same evening 18 November our village held a Beaujolais Nouveau social evening and our guests came with us. To commemorate the new wine arriving our village hosts this annual festival. In the village hall there was food, good wine, great conversation and DANCING! Our guests really enjoyed this slice of French village life and a few moves were made on the dancefloor. It seemed appropriate to end a thoughtful day in convivial company, French, Canadian and British as one. Vive le Beaujolais!

Slow but steady progress is being made. Inside the stable area the first fix electrics and plumbing is done, insulation in, floor tiles downstairs nearly all laid. We are now waiting on the new doors and windows because until we have those in and the building is weather proof we cannot continue with plastering and putting in the staircase etc. Then of course there will be the bathroom, kitchen to do, etc etc. 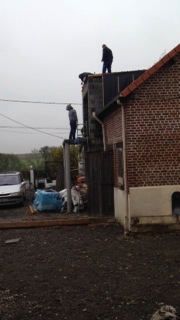 It is slow, but we are really pleased with the work. As our good friend Marie has taught us, this French phrase is very apt:

That’s our approach with David like a little robin!

As we write this we have a digger out the front digging the hole and trenches for our new septic tank. We have been conversing with Bernard the septic tank man about where the tank is going to go, how deep, how it works. French vocabulary clearly improving day by day… Ohh la la comes in very handy. 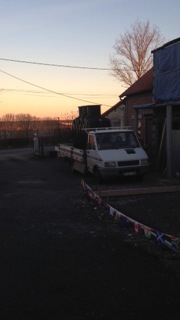 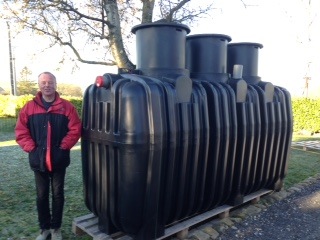 It’s cold. Minus 3 degrees last night so the chickens have their NASA inspired cold cover on their coop and their was an inch of ice on their water this morning. Cold chickens = low egg production and they still haven’t finished moulting! Better get a move on girls you need those feathers. They are happy though and like their daily grape ration. Thank you to Sally and Chris who on their visit from Wales bought some grapes especially for the hens. David shakes his head, the hens better treated than he is. 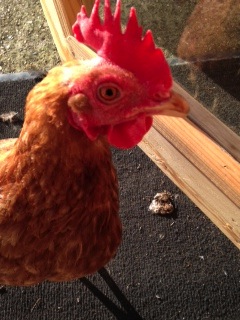 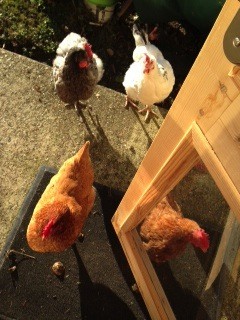 Can we come in please we're cold!

Another great newsletter, but disappointed there are no photos of David 'cutting some shapes' at the Beaujolais Nouveau event!!

Hope to see you both soon X

We were thinking of you on the 11th and 18th and remembered our lost family members at our local memorial. We are trying to arrange a trip next year to visit Pete's uncles graves who we only discovered after our last trip in August.
Thanks for a wonderful visit and we hope you have a restful Christmas.

Excellent wrap again Julie & David. It has been a massive year for you and you have done the diggers proud with your service, advice and hospitality to your guests and tourists. Best wishes to you both for Christmas. Geoff Cheryl & Ellen Nougher

As always your newsletter full of interesting stuff. I had thought to come down for the battle end ceremony but health issues decided otherwise. Nevertheless I do intend ro come down again and stay with the two bests hosts anyone could hope for.
Best Wishes and Happy Christmas and New Year.

I think the hole for your septic tank might be the second biggest hole in La Boisselle!

As ever, your news is packed with fascinating information. What a great link this is to events on the Somme and the people who come to pay their respects and learn more about their family history.

Sorry to hear about the lack of grapes in your diet, David!