Posted on 31st March 2017 by Julie and David Thomson in General News.

Spring is here, both officially and as heralded by the weather. The days are warming up, the sun has on occasion flexed its rays and green shoots cover many of the fields and daffodils bob their spring heads. Yes, there is rain sometimes too, but more showery now.  As always there has been plenty going on here on The Somme, but somehow things always feel a little easier in spring sunshine. This month we have some sad news to report as well as news of new arrivals at No.fifty6.

Robert (Bob) and Colleen Costick have been visiting the Somme for many years and since we began at No.fifty6, they have stayed with us 4 times a year. Their knowledge of the area is incomparable and they have made many French friends since they have been coming to France and they are known to many of our guests. Sadly, Bob died in January this year after a short illness. In accordance with his wishes, his ashes were interred in Bouzincourt Cemetery here on The Somme on 23 March. Colleen’s grandfather is buried in Bouzincourt Communal Cemetery Extension having died in September 1918 while serving his country and helping the village of Bouzincourt - Bob’s ashes and headstone are just a few metres away from the 1918 grave. Colleen and Bouzincourt village organized a wonderful service for Bob on 23 March. The village schoolchildren came and each child paid homage at his grave and each laid a single stem rose of peach or white (a little piece of England for Robert as the headmistress explained to us). There were many floral tributes from local friends and of course from the Mayor of Bouzincourt and also the Mayor of Lihons, where Colleen and Bob also visited frequently for the French history there.

Bob was a kind, generous man. A proper, old-school English gentleman who enjoyed his cricket, football and flying. After some time in the RAF he spent the rest of his career with the Australian High Commission, which is where he met Colleen. We have such fond memories of Bob. His laugh, his knowledge on all manner of things, his kindness to us, always knowing when a kind word was needed, his passion for the history here and most of all his love for Colleen.

A special man held in close affection by us, who will be sorely missed. 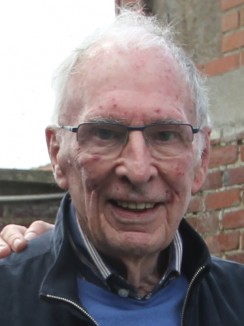 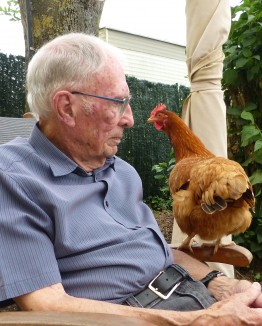 Bob conversing with Joan in the garden

The Wetherall Family, John, Pam and daughter Emma, visited form their homes in North London to pay respect to Private Edwin Walter Wetherall, John’s uncle, who was wounded on the Somme on 17 February 1917 near Baillescourt Farm, Miraumont. Edwin who was with the 1st Honorable Artillery Company, sadly died of his wounds in a military hospital near Rouen on 15 March 1917.  John, Pam and Emma, visited the site of Edwin’s last battle action, walking the area around Baillescourt Farm, which still exists, then took their pilgrimage to Rouen to visit his grave 100 years to the day. The family wrote to us after their visit saying: “it was very poignant to pay our respects exactly 100 years to the day since his death and we all felt very glad we had made the effort. Of course, those buried either side of him also shared his centenary; they weren’t lucky enough to have visitors, but perhaps somewhere in the world, someone was remembering them.” 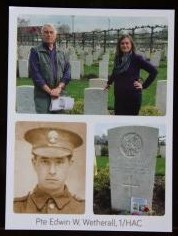 As we reported last month, we have been helping with a project organized by AWAMO to remember Animals of War on The Somme.

With good weather here for spring, works will start shortly on the groundworks for the project and purple roses are being ordered for the memorial garden. In addition we have received from Australia, Purple Poppy Pins to sell to help raise funds for the projects supporting animals in war and to remember the sacrifice of animals in war. The lapel pins are lovely, and are €6 with all proceeds going to support the Australian War Animal Memorial Organisation. 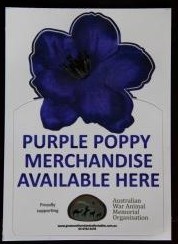 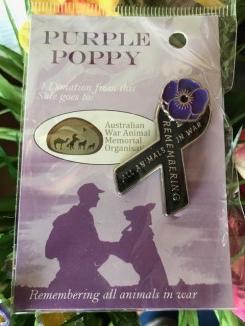 The inauguration of the Somme memorial will be on 21st July in Pozieres, attended by VIPs from various nations as well as many animals and their handlers.

The building works continue. Slow but steady progress to the interior, and improvements to the roof have now been completed. Next job is new guttering. We still do not have a completion date. Little by little we will get there and we can see progress, albeit slow!

The chickens love spring, their hormones rise and so does egg production, which is good for those poached eggs for breakfast. Joan has continued to be the one causing most havoc. She is mistress of the escape committee and last week got through the hedge and fence to go and say hello to next doors ducks and geese. All fine until Joan panicked and couldn’t find her way back. With some gentle coaxing and David pretending to be a chicken showing Joan how to crawl under the fence she made it back. The fence has now been reinforced! The girls have also been enjoying weeding our vegetable patch. They are great rotivators, getting it ready for the next planting season! 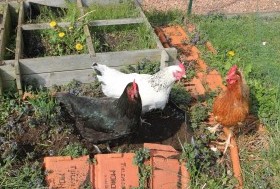 We mentioned we may be getting some new arrivals and indeed we have. In mid March our chickens were joined by 2….bunnie rabbits! Our neighbours’ grand-daughter in Doullens could not look after her pet rabbits any more so we offered to take them in. They arrived in 2 cages looking very confused but they are now installed in their new rabbit house and run which matches the chicken coop - we are keeping rabbits and chickens separate. So 2 “free” rescued rabbits and many Euros of rabbit house later, we have new garden guests, much to the amusement of the hens. The rabbits had never been housed together before so we really did not know how they would get on. We are told they are both males and there followed 48 hours of serious “friskiness” shall we say (are we sure they are male???!!!) all in the spirit of deciding dominance we think, but they have now settled down to the odd bout of mutual “friskiness” so maybe neither is dominant. They came with names but we think they need new names, as they don’t seem to respond to their existing ones. The brown one was called Caramel and the white one Milky Way. We would love to hear your suggestions.  David has 2 words for them… 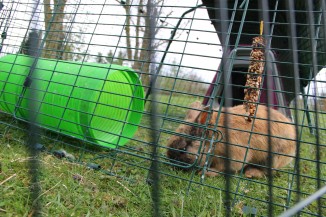 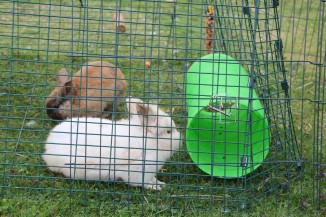 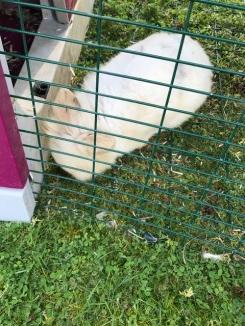 Julie - you were a magnificent friend and great help to AWAMO with the war animal memorial. Thank you- I hope many people stay at your beautiful place when visiting the war memorial.

Thanks for the latest newsletter and the mixed news. Good to see that another family was able to commemorate exactly 100 years later. Never forgotten.

Your latest made me sad made laugh made me want to go back. Thank you for all you di

So sad to read the news about Bob's passing, it was a privilege to have met him at No56. The two words you used in his epitaph are how we will remember him, 'English gentleman'. Rest in peace Bob.
Thank you as always for the newsletter and please keep a Purple Poppy for Kath.
See you two, La Boisselle, chickens and rabbits in July.

Dear Julie & David,
Lovely to read the regular 'doings' in the Somme - always look forward to it as you cover a wide variety of events. Great to hear that someone is officially remembering the animals. Brings to mind the lovely dying horse and handler sculpture at Oppy. I can understand sculptors, etc, getting a lot of inspiration from animal/bird exploits during WW1.
Keep up the good work. hope that the new buildings are finished soon. Look froward to seeing them and you both at the end of May.
T & B

Great newsletter as always. Lovely photographs of Bob. Can remember him and Colleen pointing us in the right direction when we left you to go to Ypres for the first time. A very knowledgeable Gentleman.

Can imagine Davids 2 words !!! Will have to add carrots to the shopping list !! See you soon
Chris and Sal x