Spring in the Somme Centenary Year

Posted on 31st March 2016 by Julie and David Thomson in General News.

Spring is in the air, every where we look around…despite some storms and heavy winds, March weather has been mainly dry though chilly but the blossom is out on the trees, the daffodils are up and the rabbits and chickens play alongside each other in the garden. The clocks sprung forward an hour last weekend and so spring is definitely in the air. The lighter evenings make it a perfect time to explore the Somme and both we and our guests have been doing just that.

There is much work taking place around The Somme to prepare for the centenary.

Thiepval Memorial has scaffolding in place around the upper levels but free access around the piers. The Visitors Centre is open with work on the extension progressing. Access to panels may be restricted or completely closed on certain days as scaffolding is removed.  New flagpoles have been installed atop Thiepval.

There will be a security cordon in place around the immediate Somme area from mid afternoon on June 30th until possibly 6am on 2nd July. During this time, access will be prohibited by all except those who are attending a ticketed ceremony. We understand those guests staying with us for the duration will be given a special permit allowing access to and from our premises, as will local residents but access to the memorial sites will be forbidden unless by ticket. Lochnagar Crater, Thiepval, Ulster Tower, Newfoundland Park and Fricourt German Cemetery commemorations are all ticketed events. 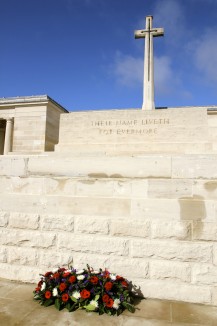 The flowers laid by David Cameron and Francois Hollande at Pozieres.

The information is subject to change as security plans are updated. Having experienced the very tight security when President Hollande and David Cameron visited the area we know that the security arrangements will be strictly enforced. Our road was closed for 4 hours while Cameron and Hollande made their visit and there were no exceptions. Recent events in Brussels and elsewhere in the world will only heighten security levels. 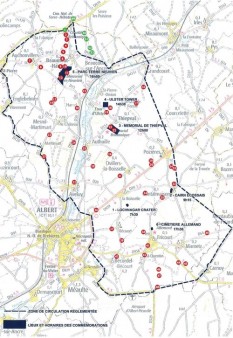 A new museum has opened in Souchez, close to Lens and the French Memorial at Notre Dame de Lorette and across the valley from Vimy Ridge. This is a good stopping off point on the way to us to or from Calais as it is about half way. Lens' 14-18 - Centre d'Histoire Guerre et Paix traces the history of the conflict from its outbreak to post-war reconstruction of the devastated Nord/Pas-de-Calais region, with a strong international emphasis.

Visitors can consult the records of 580,000 troops commemorated on the Ring of Remembrance, an elliptical monument inaugurated by President François Hollande at Notre-Dame-de-Lorette on Armistice Day 2014. The ring of remembrance is also well worth a visit. Julie’s great uncle’s name is on The Ring as he died in the Artois region.

The strikingly modern Lens' 14-18 building, designed by the architect Pierre-Louis Faloci, is structured around cubes of black concrete called 'chapels'.

Exhibits have been sourced from across the world to reflect the viewpoints of all the Great War protagonists,

The museum has free entry, plenty of free parking and excellent toilet facilities. An optional audio guide available at the welcome desk is €3. 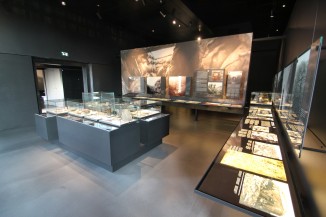 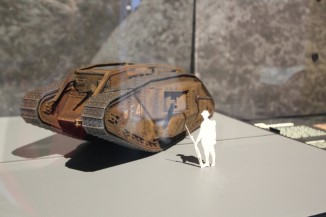 Guest Beverley Craig from Melbourne, kindly alerted us to the Poppy Memorial Park. Similar to the poppies at the Tower of London in 2014, The Poppy Park was open for 5 weeks in 2015, and saw over 102,000 commemorative poppies symbolically displayed to form the shape of a giant poppy with the name of a fallen Australian soldier attached to each stem. . Each poppy was made up of a long green stem, fabric red petals and a black centrepiece.

Poppies with the names have now been collected, packed into commemorative boxes and are available to purchase, to keep as your own symbol of remembrance.

Beverley kindly sent us a poppy, which bears the name of Clarence Timothy Ryan who died on 19 July 1916 at Fromelles and is commemorated at VC Corner Cemetery.  We recently visited Fromelles where there is also an excellent museum. VC Corner is an entirely Australian cemetery and has no headstones, with the dead buried in 2 mass graves and their names remembered on the memorial wall. 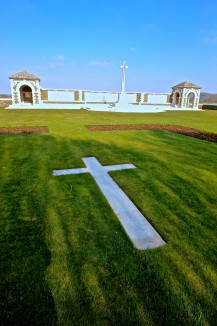 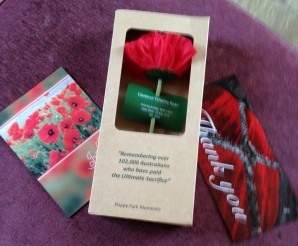 Another recent guest to No.fifty6 was artist Jacqueline Hurley. Jacqueline paints from her heart and imagination, depicting various war scenes, using the symbol of the red poppy against gritty black and white landscapes. As well as depicting more recent conflicts, Jacqueline has created a World War 1 collection and has exhibited at the Royal Albert Hall at the Festival of Remembrance. We have some of Jacqueline’s excellent WW1 collection prints for sale at No.fifty6 priced at €25.

The hens love the spring! They seem to have an extra spring in their step, their winter house cover has been removed and they love playing in our plant pots – with many a daffodil bulb seen hurled over the sides of the pot as the girls dig in. No room for daffodils – just chickens! 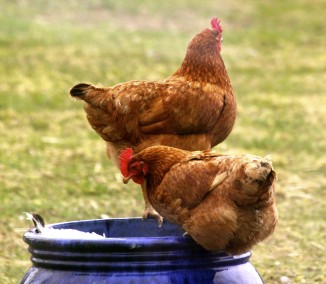 Looking forward to seeing you again later this month.

Love reading your newsletters :-) All the best for the busy season ahead xx

Thanks for the update. I've visions of chickens, rabbits frolicking among the daffodils. Going to be a busy summer for you

All the best David & Julie as you approach probably the busiest summer time at No 56 yet! Always interested in catching up on what is happening at your place and the Somme generally. Geoff & Cheryl Nougher

Although not planning a visit this year, it is always good to catch up with your news.

The chicks look happy and healthy! Having them firking around in your garden stops you worrying about anything else. Lovely.
Cheers. Geoff

11 hours ago we said:
@fossemidge @ride4kingsmen Haha yes it’s often like that but today dry and dusty