What's in a Name, Lochnagar and Grandie's Story

Posted on 31st May 2015 by Julie and David Thomson in General News. 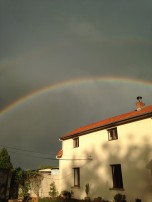 Last month we introduced our 6 chickens. The girls are now settled in and loving their life here at no.fifty6. They roam around the garden by day. We have had the odd naughty moment, a cucumber plant scratched to bits, seedlings tray knocked over, gravel scratched all over the patio…but they are the most adorable girls each with a character and the eggs are wonderful and they are laying well. Clever girls. Thank you to everyone for their suggestions for names for our hens. We liked Pip, Squeak and Wilfred, Vickers, Maxim, Blodwen, Kiwi, Kanga etc.  All wonderful and appropriate names.

Drumroll please (or eggroll if you prefer)…we have now named our hens and none of them have a Great War theme. The 2 white hens are Suzanna and Brigitte. Suzanna after Suzanna Reid the British TV presenter (David’s choice), Brigitte after Brigitte Bardot the French blonde bombshell. The red hens are Joan after the character Joan from Mad Men who is a large chested redhead and Rita after Rita Hayworth, another famous redhead. The black hen is Gabby after Gabby Logan, BBC sports presenter (David’s choice, there is a theme here!) and the grey is Mme Cholet after the only female Womble who was also French and grey and partial to a bit of cooking. So that’s it.  Joan is definitely the naughty chicken. 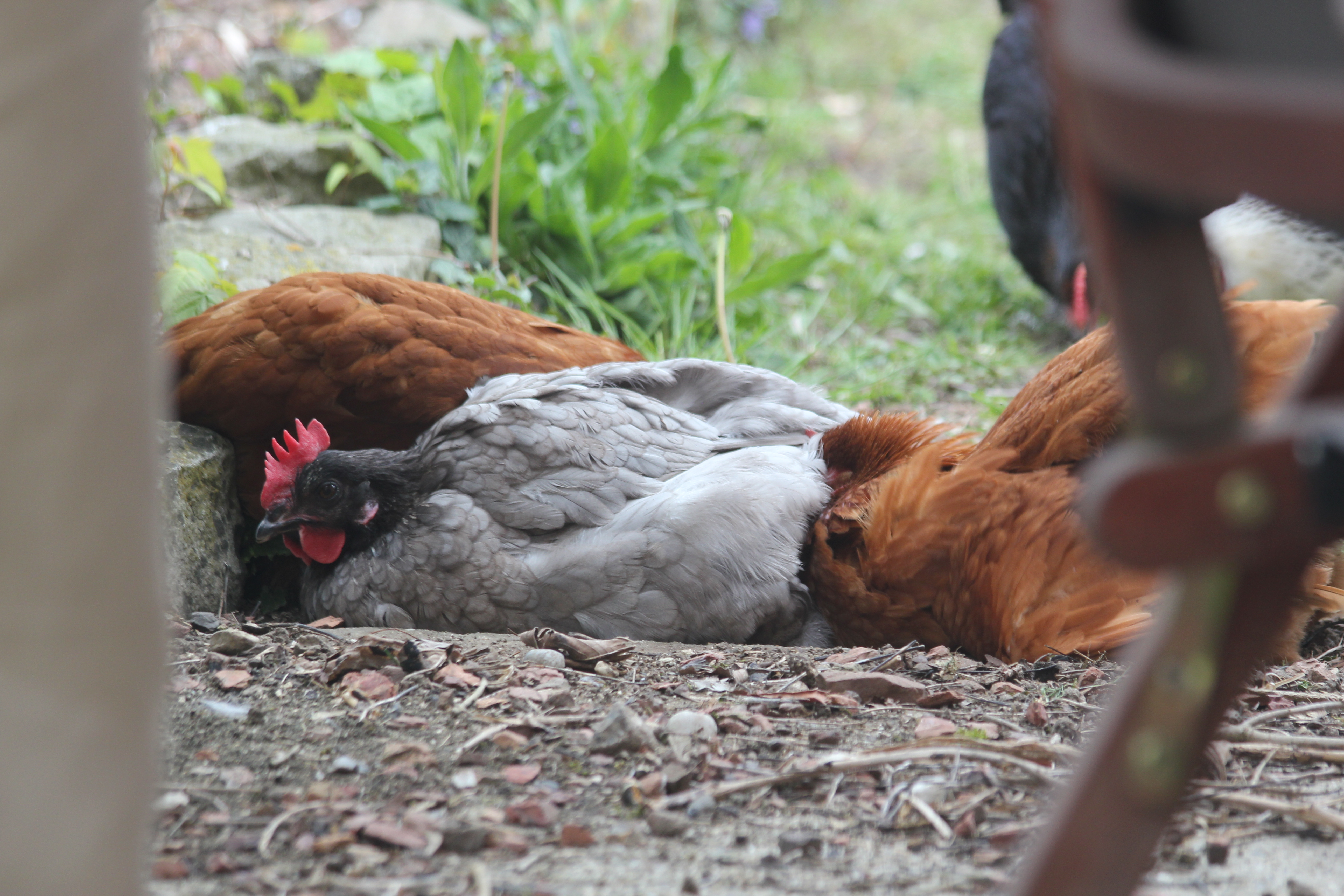 Mme Cholet between Rita and Joan 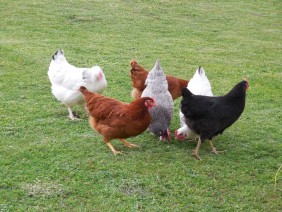 The weekend of 25/26 May was the annual working weekend at Lochnagar where Friends of Lochnagar come over to work at the crater to get it ready for the summer after the winter and spring. A group of about 50 volunteers made it and there was so much hard work done. The crater bowl itself was strimmed and raked, the hedges trimmed back, tree stumps removed, more memorial plaques put in, benches revarnished, paintwork retouched, a new information board put in place above the visitors’ book and preparations made for a Nurses’ Memorial Bench which will be unveiled on 1st July 2015. Volunteers were shattered after hard labour during the day, and camaraderie by evening.   It was good to see some young people getting involved as the strimming and raking down the crater is a very physical job. Richard Dunning says:

"What an absolutely brilliant few days it was. Almost 50 incredibly dedicated people working quietly away - an incredible sight. I shan't mention any names - it wouldn't be fair but looking around I couldn't help but think there aren't a better bunch of people than the Friends and I feel very privileged to be part of.  And the result was the Crater looked better than at any time, the magnificent views were opened up even more.

And everywhere visitors were engaged with, listened to, informed and enlightened in a very special way - many made a point of telling me what a reward experience it had been. Well done all." 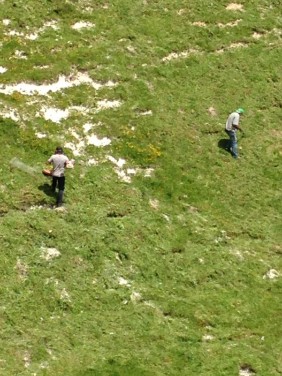 Volunteers Rob Kirk and Spencer made to look diminutive as they strim and rake in the crater. 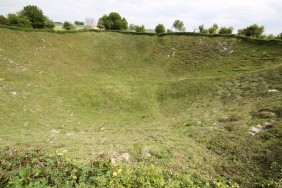 The crater after the weekend looking magnificent.

At the weekend it was revealed that over 300 memorial plaques to veterans of the Great War have been installed on the pathway at Lochnagar. The voluntary work to help maintain Lochnagar can be supported by sponsoring a plaque in memory of a Great War veteran from any nation, those who fell or those who survived. Sponsorship is £25 and further details can be found at:

This week, roadworks have started on the road up to the crater. The road will be widened and a turning circle for coaches introduced. The work will take approximately 3 weeks.

Earlier in May we had guests Robin Jeavons, Marion and John Parr to stay with us. Robin and Marion are cousins and they were on a pilgrimage to follow in the footsteps of their grandfather, Ernest William Harvey.

Ernest (Grandie) was born in February 1896 and joined the Royal Field Artillery on 26th January 1916 as a Gunner, 82nd Brigade, B Battery.

He left in England his fiancée Ethel May Hill and prior to enlistment worked in his father’s grocery store in Netherton, Dudley. 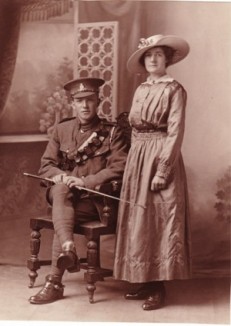 Ernest and Ethel before he went to war.

Ernest saw plenty of action in Belgium and France and fought here on The Somme. He was in action at La Boisselle, Courcelette and the Schwaben Redoubt in 1916.  In 1917 he received a shoulder wound which was treated in the field and then he was moved to the Ypres salient. In May 1918 he was back on The Somme.

Robin, Marion and John spent a day with David following in Ernest’s footsteps on the Somme and located the field where Ernest was injured in May 1918. He was badly wounded in the leg at Courcelette by a gunshot wound and taken to a field hospital.  Despite treatment in France, he returned to England still very poorly as gangrene had set in and his right leg was amputated on his return to the UK in Hull. He survived the operation and during his convalescence he married Ethel May and went on to have children. He returned to his occupation at the grocer’s store having had an artificial leg fitted.  He took over from his father and ran the shop until his retirement. Robin and Marion have fond memories of their grandfather who quietly got on with it. He spoke little about his war experiences and it is now, some years after his death, that the family have picked up the story. The War touched so many lives. Was Ernest a lucky one to survive? He went on to have a family and live a “normal life”, but no doubt there were dark memories lurking having seen and suffered so much. 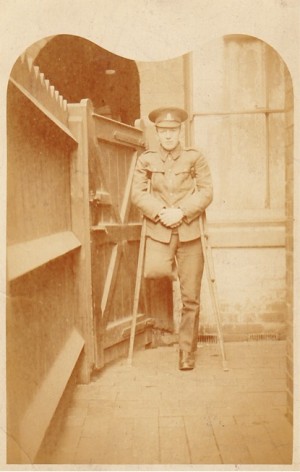 Ernest on his return from war.

Thank you Robin, Marion and John for letting us share Grandie’s story. We have Ernest’s photo with us on display at no.fifty6.

Finally this month, summer is coming. The poppies are starting to come out on The Somme. That splash of red against the green fields so evocative. 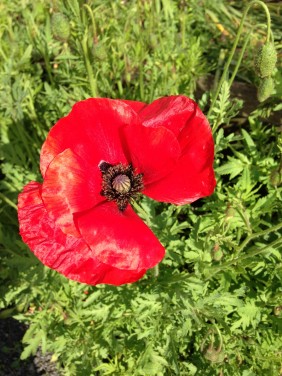 The first of this year's poppies in our garden.

Always nice to receive your newsletters. It brings back memories of our wonderful visit. Guess you didn't make it across to Liverpool, but still have the St Helens pals book for you. Can post it to you if it would be easier. Know how busy you will be for the next few months. Hope all goes well for you both.

We did a tailored day tour with David and it was the high point of a 10 day visit to The Somme and Flanders. Very informative, emotional and friendly.
Thank you David, until next time.

What wonderful stories about the WW1 veterans. I am looking forward to visiting the crater, as well. I hope I can walk around it ok. It looks really well looked after, now the volunteers have been there. I had no idea it was so big. KS

Another excellent report, and what an interesting article regarding Ernest Harvey, a true survivor, a remarkable man. In fact, one of many remarkable men.
We'll be seeing you both soon and your new 'girlie family'. And we are hoping to catch the poppies in bloom.
We are also looking forward to inspecting our memorial plaques at Lochnagar, and to admire the hardwork that the Friends recently undertook.
We have a long list of graves, cemeteries, memorials and places of interest to visit. The list grows with each trip.
Many thanks for the update, always a pleasure to read.
M&K, Bath, UK.

My son in law David and myself spent 6 days at no56, and it was like we had known David and Julie a long time, as they made us so welcome and looked after us so well.David took us on a guided tour,and traced some of the places where my Grandfather was and where about's he was killed at the battle of Guillemont .I will never forget the evening meals sat round the dining table with the other guests having wonderful conversations, and it was sad to leave at the end of our visit .I can thoroughly recommend no56 to everyone. regards Gerald Abbotts Oxfordshire.

That is a wonderfully touching and moving story. I have been following the progress of Lochnagar Crater absolutely breathtaking views. I visited there last year and the photographs show how far it's come with the help of friends of Lochnagar - you are all truly remarkable x

2 hours ago we said:
@JaneElRoberts Ah, we are there!