Tanks, A Soldier Returns to La Boisselle and marking 100 years.

Posted on 31st March 2015 by Julie and David Thomson in General News. 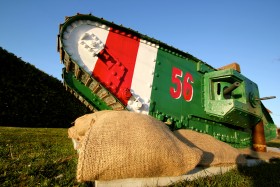 Clatter of tracks at No.fifty6

Julie and David are delighted to announce the arrival of a new addition to the no.fifty6 family – Old Sparky.  Following a chance conversation with guest Ian Mould, a concept was developed for a gate guardian at No.fifty6. The realization is a quarter scale replica of a British MkIV tank. Ian delivered the tank, which weighs 110kg in March. Every track component has been hand crafted in aluminium, other components include stainless steel, marine plywood, Lewis guns sourced from the Far East via the internet, broom handles and good old fashioned British engineering courtesy of Ian.   The detail is quite outstanding. In No.56 livery nestling on sandbags, Old Sparky stands proudly looking out over Mash Valley. And why Old Sparky?  The name is a tribute to Julie’s Great Uncle, Reginald William Sparkes of the 13th Battalion Essex Regiment who died in the battle of Cambrai in the German counter attack on 30th November 1917 in the Canal du Nord area. He has no known grave. 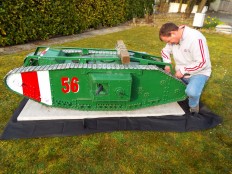 Ian Mould says, "The tank is definitely a one off. I enjoyed making it and it received a lot of comments from my friends as he took shape over the months and his progress appeared in photos on Facebook". From conception in August to delivery in March an astonishing 8 months work with amazing attention to detail courtesy of Ian. 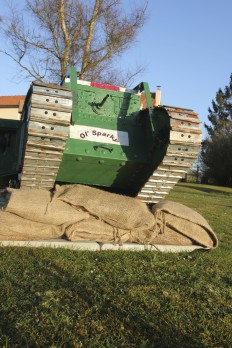 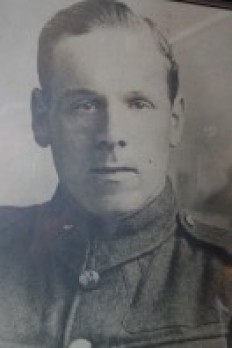 Recent guests Brian and Margaret Havery from Nottinghamshire returned for their second visit to the Somme and kindly donated the original photograph of Brian’s grandfather Luke Dodd of the 4th Battalion Tyneside Scottish, Northumberland Fusiliers in uniform. Luke, just 18,  was wounded on 1st July 1916 in La Boisselle, survived a further gunshot wound and was gassed on 3 occasions. His fight continued after the war to receive a medical war pension. A coalminer he moved from Northumberland to Nottinghamshire and raised a family and future generations have continued to serve their community, led by Luke's example.  He lived to a good age and Brian has fond memories of his grandfather. On their first visit to The Somme Brian and Margaret walked in Luke’s footsteps with David, retracing his time in La Boisselle 100 years ago.  Luke’s is one of the stories of those who survived the bloody onslaught in La Boisselle, but bore the legacy of war for the rest of their lives. We would like to thank Brian and Margaret for their gift of Luke’s photo and papers. They said “having him here in La Boisselle, with you retelling his story, he will live on to those who come to the Somme.

The Department for Culture, Media and Sport in the UK have put out to tender for an event management company to deliver the 1st July 2016 commemorative events at Thiepval.  As so many people are expected, the event may be ticket only, with large screens placed in Albert and other locations for people to watch.  There are also plans for a candlelit vigil the night of June 30th 2016 at Thiepval for descendants of those commemorated there. Again this is expected to be ticket only.  It was also announced this week that the Queen will be attending commemorative events on The Somme on 1st July 2016. 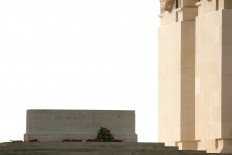 As we continue to commemorate the centenary of the Great War what was happening in our Commune during April 1915?

On Good Friday (April 2nd 1915) French artillery began a massive bombardment of the Commune which resulted in German soldiers being buried alive as their dugouts collapsed.  During the night French flares illuminated the remains of La Boisselle with German officers describing the scene as “eerie and barren with only the remains of the church still visible”. 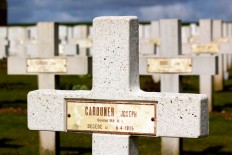 As the month continued fighting increased in intensity at the Ilot (Glory Hole) as the Germans desperately attempted to destroy the French trenches, whilst in the village, troops and supplies were moved out to prevent further losses due to French artillery bombardment. Field kitchens were relocated to Contalmaison with meals being transported by hand or on horseback to the German Front Line. Drinking water was in short supply and new wells were dug in Ovillers to satisfy the needs of men and horses.

Poignant and Educational or Crass Commercialism?

With Anzac Day approaching on 25th April, following on from the UK Sainsbury’s Christmas 2014 Christmas Truce advertisement, here is something in a similar vain to commemorate Gallipoli.

May we wish everyone a Happy and Healthy Easter.

To David and Julie,
Many thanks for the way you looked after Leisa and I last weekend. Your accommodation and meals were excellent, your conversation enlightening and the information of the memorials and history in the area was pivotal in ensuring that we properly recognised the significance of the sacrifice made by Thomas Patrick Shannon. I will thoroughly recommend to our families and friends who travel there over the coming years to try and stay at Number 56. To all Australians who have an interest in the Somme and its history, I would suggest you contact David and Julie to use Number 56 as a base in the area.
Regards to you both, Tim and Leisa Corcoran

Great to hear the news, getting excited about the fourth coming events and can't wait to be back in the north....so from the south west of France ...see you soon.
Don't work too hard

Fantastic to see the story about my great grandad Luke Dodd (Little Grandad to me). I'm so pleased the photo I dug out of the loft will serve to tell the tale of The Battle of the Somme to future generations.

Thanks for all the interesting updates. Thought the advert was poignant. Yes, it's an advert but the company donates money and, if it educates those who don't know, it's worth it. Love the tank .... thanks for every bit of interesting news.

Always great to hear the updates... Keep them coming I am always excited to sit down with a cup of coffee to read the latest updates from Number 56. Happy Easter to you all.

Always pleased to receive your very informative news from "56" have fond memories of my last visit.

It's always good to receive the news from No.56.

Old Sparky looks very fine! And thanks for the warnings about how busy events will be next June/July. Will plan accordingly. Best wishes to you both.