Posted on 30th June 2017 by Julie and David Thomson in General News.

As you read this, the commemorations which mark the 101st year since the commencement of the Battle of The Somme will be taking place. Today ceremonies will be held across the Somme from Lochnagar to Fricourt German Cemetery and many other locations in between.  We will take a moment of quiet reflection to think about the events here 101 years ago and the shadow those events still cast all these years later.

June has been hot – heatwave time and the fields are dry and bronzed. The farmers shake their heads at the lack of rain (unusual here) and irrigation pipes are springing up across the fields.  As always the different weather brings a different beauty to this beautiful part of France we are lucky enough to call home.

At the beginning of June we had an amazing visit from a New Zealand family. Sarah Lamont came with her husband Andrew, father Graham and brother in law Lew as they traced several of their family members on the Western Front. It was very much a long time in planning the pilgrimage for them. We researched one particular ancestor for them  - Nisbet Shirreffs Lamont  - Graham’s great uncle. Nisbet and his brother Stewart Lamont left New Zealand as part of the 2nd Battalion Otago Regiment and fought together on the Somme. Stewart was wounded in the 15th September 1916 attack near Longueval but survived, but Nisbet died in the 1st October 1916 attack near Eaucourt L’Abbaye. We traced the 2 brothers actions and the family found it a very moving experience. Young Nisbet had been such a promising young man, a teacher, sensitive and much loved. He has no known grave but we were able to take the family to the trenches where it is very likely Nisbet was killed, having seen his brother wounded the previous month. Nisbet is remembered on the New Zealand Memorial to the Missing at Caterpillar Valley. However, some of his fellow 2nd Battalion Otago men killed on the same date are buried in Warlencourt Cemetery so we visited there too. It was an emotional time for the family but Graham was so pleased he had made the journey which his parents and grand parents had never been able to make. Nisbet’s brother Stewart did survive the war but was deeply troubled by the events he witnessed. He died in 1967 aged 70. 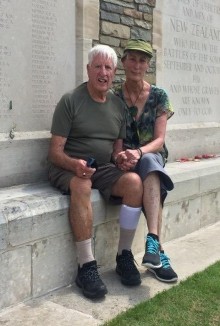 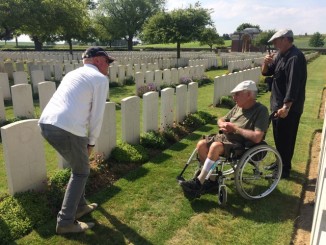 Darren and Deb Card with their parents Elaine and Cliff made the journey from Dorset to remember their Grandfather Fred Card who served with the 1st Battalion Dorsetshire Regiment. He signed up in August 1914 aged 33. He was killed by shellfire prior to the main Somme offensive on 20th June 1916 near Authuille aged 35. He is buried in Authuille Cemetery. He left behind wife Mabel and 3 sons. Darren had made a beautiful metallic poppy to leave at the grave and they also visited the Dorsetshire Memorial.  Darren left us with a picture of Fred and says – “he is remembered with love and pride by the Card family and if anyone has the time during their stay, please try to visit him if you can.” He is not forgotten. 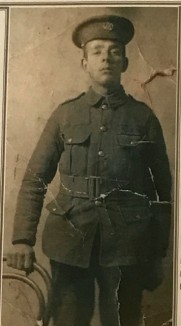 Carole Ritchie visited with her brother Steve and father Ray to remember Ernest Leopold Clift - 7th Battalion Queen’s Own (Royal West Kent) Regiment who died in the 1st July 1916 attack from Carnoy to Montauban. He has no known grave and is remembered on the Thiepval Memorial. Again, David was able to take the family to the area where Ernest fought on that 1 July day. Ernest was a London boy, a leather dresser in a tannery and Ernest’s son was Ray’s father. Carole, Ernest’s great granddaughter was born on 1st July and feels a special connection to the great grandfather she never met.    -

Chris and Lorraine Bolger from Montreal, Canada visited us in 2015 while they cycled the area but left wanting to know more about their family’s involvement in the War. 2 years later they came back and asked us to research Chris’s grandfather  - John Orr - who was wounded on the Western Front while serving with the 73rd Battalion Canadian Infantry. Family hearsay had John Orr wounded at Ypres but his service record and War Diary show that he was actually wounded at Vimy on 19th March 1917. Lieutenant Orr and an engineer he was with (they were responsible for digging new trenches near LaSalle Avenue at Vimy) were both wounded after returning to their trench. John suffered a shattered tibia and was sent to a Casualty Clearing Station where the wound became gangrenous and at Camiers hospital on the French coast he had to have his leg amputated. It was the end of his war. Chris was just 3 when his grandfather died, but he remembers the artificial limb and the stump his grandfather had. After visiting the trenches at Vimy we also covered John’s service on the Somme the prior winter of November 1916, where it was very likely that John marched past our front door (if it had been there then) as his Company moved from camp at Tara Hill to the front at Regina Trench.

We can only scratch the surface of the stories of the men who gave so much 100 years ago. We will never know what went on behind the eyes of those who survived. But their legacy lives on, in proud families all across the world. We will remember them.

A question we are often asked is – how are our building works doing? There has been some good progress this month, and of course some frustrations along the way.  The new kitchen is now installed but frustratingly we are waiting delivery of the worktops. As everything is a special size it is made to measure and after 2 delays we are told a new delivery date will be 31st July. The rest of the interior apart from some electrics and finishing touches is just about there. Our poor builder Gregory does not have much luck – after breaking his collarbone in a motorcycle accident some months ago, it never healed properly and was causing him problems. He has now had an operation to rebreak it and pin it. So he is out of action for several weeks. However, the foundations for the verandah linking area – which will be the new breakfast/dining room were laid this month. 10 tons of concrete poured and leveled… final measurements have been taken for the (again made to measure) verandah/conservatory and we won’t hold our breath but it should be installed in September. So when is it all going to be finished? We are not taking any bets but if it is all done by the end of the year we will be happy. At least David’s builders’ French continues to improve. His French gets much better when he is sorting out the kitchen company over the delays… 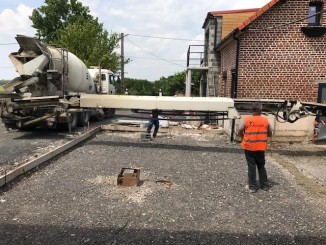 We have continued to help and support and translate for the mayor of Pozieres, friend Bernard Delattre, and Nigel Allsop, President of the Australian War Animals Memorial Organisation (AWAMO) as plans and preparations continue for the new Animals of War Memorial which will be inaugurated in Pozieres on 21 July. The statues of a horse’s head and dog’s head have arrived, groundworks for the supporting pillars are being installed and roses are being planted in the memorial park. Many Australian VIPs will be attending the inauguration. We will of course report next month on the ceremony with some photographs. 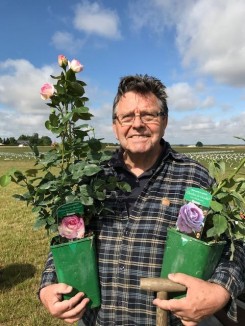 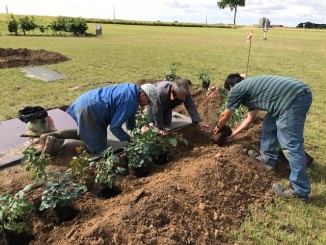 Poppy Reed will be opening the Musee Courcelette from today 1st July. As well as the museum it is a good place to stop for a tea, cake and a chat.

Thank you for your lovely comments about our dear Mme Cholet and Joan. The 4 remaining girls are doing fine and dear little Rita, the other red chicken, has come out of Joan’s shadow and is now the friendliest, bravest chicken. She clearly misses her red friend though. They still all like grapes, so if you are visiting, be sure to have a few in your pocket.

We are also on fox alert – foxes are not normally a problem here – but our neighbour Jonathan lost 12 of his ducks to a fox last week. Not eaten, just killed. Our girls and the rabbits are locked up at night. Please stay away Mr Fox.

The rabbits, Sausage and Mash, do not like the hot weather, sleeping most of the day. When the temperature was very extreme, following some advice, we gave them some ice blocks to lie on. Iced Bunnies the order of the day!

At the end of our garden in the fields our neighbours keep horses. One of the horses Givrenchine has been pregnant and neighbour Jean Pierre told us her due date was a few week away. Last Monday night Givrenchine came to chat to us at the fence as we put the chickens to bed, then as we woke up the next morning Givrenchine was standing staring at us at the fence with her new foal!!! We alerted our neighbours who were not aware she had given birth in the night. The vet came and mother and baby are both fine. So we now have a lovely bouncy boy foal in the field who learns every day from his mum. He is called Hope – his dad is French Dressage Champion so they have high hopes for Hope! It really is quite a menagerie here. 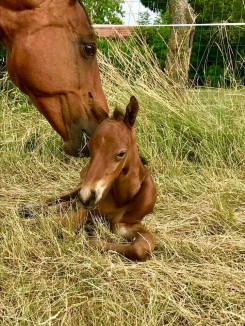 Our 5 days with David and Julie was quite simply, exceptional. We were guided by them so sensitively to 'walk in the footsteps' of our men across the beautiful Somme landscape and to reflect on the tragedy and lessons of that time. It was a profound experience for us all, for which we are very grateful. Thank you, good friends!

You two are amazing. When we visited in June 2017, I never thought I would be pulling German barbed wire out of a ditch near your front yard or watching Sarah pull out and hold up a clip of 100 year old ammo. Unbelievable.
When I was in Saltzburg Museum following our extraordinary experience with you two I took a few pics on my phone that may help to explain what the long hunk of metal is that came out of the trench by your front gate. If you can email me your Viber number I should be able to send them to your phone.
I cant begin to tell you the debt that I feel our family owes you two. You are definitely in a different league from anything I have ever experienced before.
Hoping to hear from you.
Chocks away.
Lewis

Looking forward to seeing the extension finished. Enjoyed reading those stories, the memories are still strong 101 years on!

Thanks for the update, we are all looking forward to July the 13th and meeting up again.Let us know if you need any supplies. Hope the rain stays away and the drinks are cold, Andy

Always enjoy your newsletter. Missed being on the Somme this July 1st but will hopefully be back out there soon.

Thanks for the latest news. The renovations are looking promising. Hope to catch up with you again in either November or February.

Always a "must read". Thank you. As usual, you have been very busy. Fingers and toes crossed that we shall see your renovations finished by the time we visit near end of Nov ... for your sakes. You deserve it!

Brace yourselves we will be I touch shortly to talk about a vist to you next May. Just waiting for final numbers.So Derby Triumph club look like we are heading your way.

Great stuff, as always. I suspect, as I dry my clothes after this morning's deluge at the July 1 ceremony at Lochnagar Crater, that the farmers' rain dances were well and truly answered.