Is it Spring or Winter? April News from No.fifty6

Posted on 30th April 2016 by Julie and David Thomson in General News. 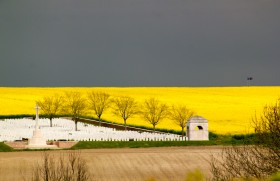 Ohhh…winter has been back in April. Not so much April showers as April chills. The wind has blown cold weather in, heavy showers and even sleet and hail with some frosts at night and the temperature staggering to reach 8 degrees by day. Still, our intrepid guests have wrapped up warm and have been out exploring the Somme, grateful for a cup of tea and central heating on their return, in stark contrast to the conditions for the soldiers 100 years ago. Despite this with the rapeseed (also called colza or canola) in the fields bright yellow it still looks beautiful. The good news is 1st May – the weather changes and sunshine and better temperatures are on their way...

Thiepval Memorial has just this last week had scaffolding taken down and the memorial is accessible again. The next scheduled closures are from 16th June when access is by prebooked arrangements only and the site will be closed 27 June – 3rd July. 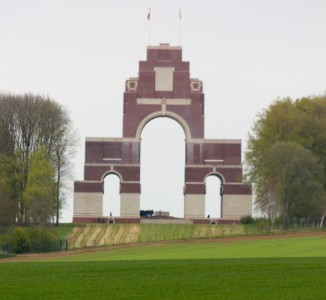 There will be a security cordon in place around the immediate Somme area from late afternoon on June 30th until possibly 6am on 2nd July. During this time, if you do not have a ticket for one of the events on 1 July you will not be allowed into the security zone, even on foot or bicycle.

Those with a ticket will only be allowed to attend that specific ceremony and will be taken out of the security zone after the ceremony to dedicated areas such as the park and ride at Meaulte.

Guests staying with us for the duration will be given a special permit allowing access to and from our premises, and have had to supply documentation to support this.

We have welcomed Australian visitors from Victoria and Fremantle WA over Anzac Day. The dawn service at Villers Bretonneux was well attended and the security arrangements in place worked very smoothly. Hot drinks were provided to those attending as it was a very cold, but luckily dry night/early morning. Our guests left at 1.45 am to catch their shuttle bus  - but they said it was an amazing experience and worth the lack of sleep and braving the cold to honour those who had made the ultimate sacrifice 100 years ago.

The New Zealand commemorations here are always held on the nearest Saturday to Anzac Day at Caterpillar Valley cemetery in Longueval where the New Zealand unknown warrior was taken from back to New Zealand. Again it was a cold but mainly dry day and the event was a colourful event with various governments and military organisations represented as well as youth groups from New Zealand. 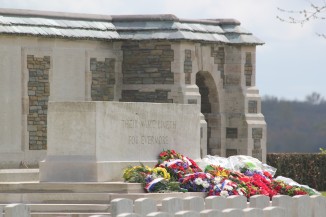 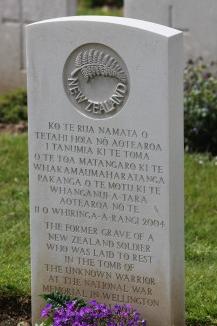 Last month we learned about a wonderful song written by a French singer/songwriter called Bruno Sauty who lives in Vignacourt, Picardy. Inspired by The Somme and the events here 100 years ago he wrote a song called Terre De Combat - an homage to the soldiers who came from afar to his homeland as liberators. It has been well received in France. Bruno has now recorded an English translation of his song Earth of Combat. We were privileged to spend some time with Bruno to help him with some of the lyrics to keep the flavour and spirit of the song in English. We hope you enjoy listening to this, which has come from the heart of a lovely man. Below are links to the English and French versions. 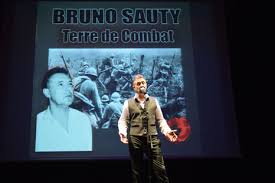 During April we visited the Museum of the Great War in Meaux with long standing guests Bob and Colleen Costick. The museum is about an 80-minute drive from us, south of Compiegne (where the Armistice was signed). We were very impressed with this French museum which starts with the ending of the Franco-Prussian War of 1870-1871 and through into mobilisation of World War 1 and subsequently the Armistice.

There are some excellent exhibits, interactive displays and audio-visual presentations. It really is well worth a visit and would be ideal linked with a visit to the Armistice Museum in Compiegne. 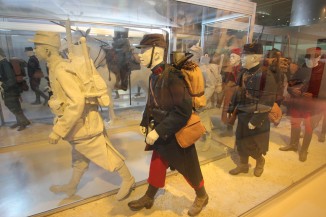 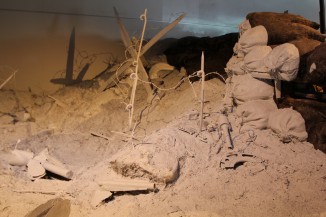 A few months ago we reported that a new sculpture was being prepared at the site of Crucifix Corner in Aveluy. The sculpture has now been finished and officially unveiled. It is a depiction of The Nymph of Aveluy which was an engraving created by French troops when they were stationed in Aveluy in 1914/15. The troops sent post cards of the Nymph engraving back home. The symbolism depicts things they thought and dreamed about – the countryside, a naked woman, and comforts from home as well as scenes of patriotism. 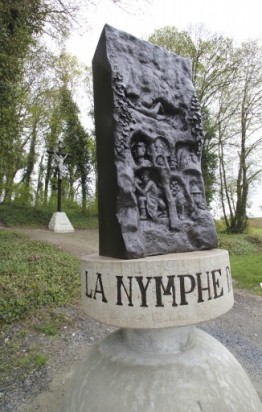 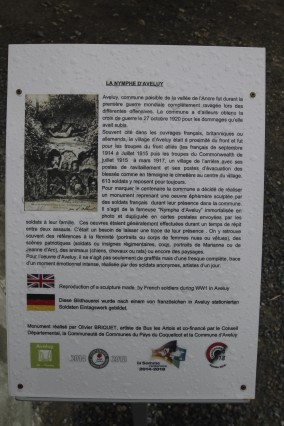 Happy Birthday Hens!!! We have had our 6 hens exactly a year now so they have had a corn and grape (their favourite foods) birthday cake and lots of birthday cuddles! They certainly have not enjoyed the return to winter weather and any signs of a spring moult are far off! 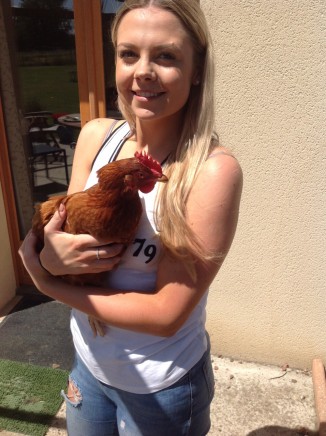 Looking forward to seeing you the first week of June.

Thankou David & Julie for your update especially this centennial year. A fantastic and moving rendition by Bruno Sauty was a magnificent tribute.

Thank you for the very interesting update. I see you are having the same weather as Wales.
See you later in the year to put on another 1/2 stone thanks to your generous and delicious food :-)
Audrey x

Thanks for the update, interesting as always, the picture of of Oliviers surrounded by a field of gold looks very impressive,,how different from the horror 100 years ago, Best Regards to you both, keep up the good work.

Thanks for the updates, happy May Day to you both, see you in a couple of weeks.

Love the picture of the cemetery with the colza or canola (both of which are immensely preferable to 'rape'!) looking forward to seeing in a month's time.

Thanks for the update it's always great to hear what you two are up to ! I'm off to South Africa next week to wrap up a 21 day battlefield journey with my Durban based Oppo. Must speak with farm owners to gain permission to walk the battlefields etc. Love & best wishes "The Weatherall Boys" Sydney Australia

20 hours ago we said:
If a photo could sum up a hot August day on The Somme. Wheat harvest done, hay baled, fields golden, Cross of Sacri… https://t.co/ahpJm07Ib4