Posted on 28th March 2013 by Julie and David Thomson in General News.

Jean Baptiste Arthur Brillant was born on 15 March 1890 in Quebec. He volunteered for service and joined the Canadian Expeditionary Force and held the rank of Lieutenant, sailing first to England and then going over to France in the autumn of 1916.

During the night of 27/28 May 1918,  in the vicinity of Boiry-Becquerelle, Brillant was called to lead a group of volunteers to help silence an outpost defended by about 50 men. Troops charged the enemy position, cut through the barbed wire protecting it, and took it. He was injured in the attack, yet captured enemy soldiers who had "valuable information". Remaining in action that day despite his wounds, Brillant would be awarded the Military Cross on 16 September 1918. 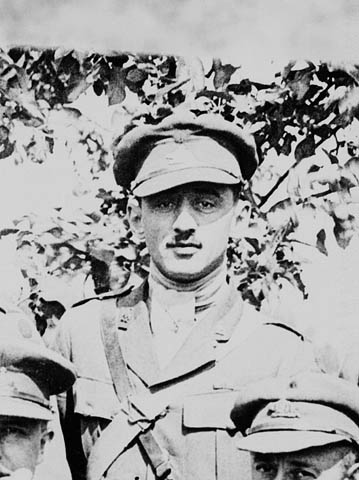 He was awarded the VC for his actions on 8/9 August east of Meharicourt, France the first and second days of the Battle of Amiens. He died the next day on 10 August 1918.
His VC citation reads:
"For most conspicuous bravery and outstanding devotion to duty when in charge of a company which he led in attack during two days with absolute fearlessness and extraordinary ability and initiative, the extent of the advance being twelve miles. On the first day of operations shortly after the attack had begun, his company's left flank was held up by an enemy machine gun. Lt. Brillant rushed and captured the machine-gun, personally killing two of the enemy crew. Whilst doing this, he was wounded but refused to leave his command. Later on the same day, his company was held up by heavy machine-gun fire. He reconnoitred the ground personally, organised a party of two platoons and rushed straight for the machine-gun nest. Here 150 enemy and fifteen machine-guns were captured. Lt. Brillant personally killing five of the enemy, and being wounded a second time. He had this wound dressed immediately, and again refused to leave his company. Subsequently this gallant officer detected a field gun firing on his men over open sights. He immediately organised and led a "rushing" party towards the gun. After progressing about 600 yards, he was again seriously wounded. In spite of this third wound, he continued to advance for some 200 yards more, when he fell unconscious from exhaustion and loss of blood. Lt. Brillant's wonderful example throughout the day inspired his men with an enthusiasm and dash which largely contributed towards the success of the operations." 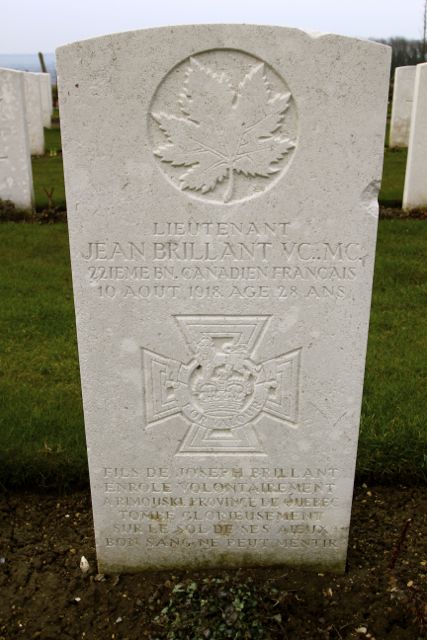