November 2015. We Will Remember Them.

Posted on 30th November 2015 by Julie and David Thomson in General News. 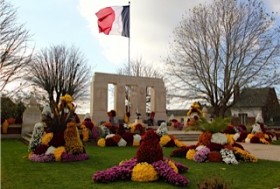 November has been dominated worldwide by events in Paris on 13 November and other terror attacks including Beirut and Mali. Here in France the Paris attacks sent shockwaves through the communities and homage was paid to the victims at solemn events in our village of La Boisselle and nearby Albert. On 27 November we flew the tricolor from our gateway as France held a memorial service for all the victims. Around the table here at No.56 there have been many discussions about terrorism from our guests from all parts of the globe. A common theme has been that we must carry on with our lives, doing good where we can; to travel and live life to the full and not be cowed by fear and evil. To all victims, those who lost their lives, those who survived and will carry a burden forever, their family and friends, you have the world’s support and empathy.

November 11 was a mild, dry day this year and we joined the village commemorations. After meeting at Ovillers war memorial we processed to Ovillers Military Cemetery and to the Breton Calvaire where the village children read poems and laid wreaths. Onward to La Boisselle and wreaths were laid at the war memorial, the 34th Division Memorial (La Madelon) the 19th Division Memorial and the Tyneside Seat. After a cup of friendship in the village hall we then walked to Lochnagar Crater where a short service was held. Julie laid a wreath with guest Ashley Atkinson and read a poem that had been written by a gentleman after a visit to Lochnagar. We then went to Mametz Wood for a short service at the memorial stone for Harry Fellowes where Julie read one of Harry’s magnificent poems and a wee dram of whisky was shared by those there as it always is. We ended the day as dusk approached at Fricourt German Cemetery where we all laid a cross at a grave of our choosing. It was a poignant way to end the 11th November commemorations. 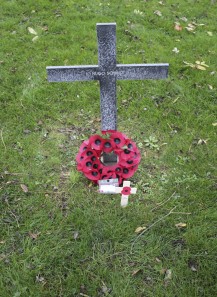 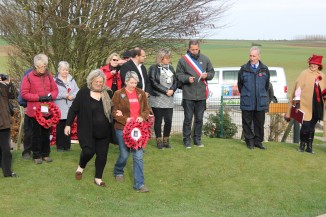 Sue and Suzanna from Wenches in Trenches lay a wreath at Lochnagar.

Along with guest Alan Laishley, we attended a commemoration on site at The Glory Hole (L’Ilot) in La Boisselle organised by Les Amis De L’Ilot. On that day one hundred years ago, 22 November 1915the Royal Engineers prepared a mine to destroy a German adit; planned detonation was for 04.30 in the morning.   However at 02.30am, the Germans detonated their own 15000kg mine against the British gallery. This explosion also caused the ignition of the mine put in place by the British. Six men of the 179th tunneling company were buried underground; the bodies of four of them William Walker, Andrew Taylor, James Glen and Robert Gavin could be exhumed in the days that followed, but those of Ezekiel Parkes and John Lane, still to this day, lie underground, 24 metres deep. On the surface, eight men also died in the explosion.

The commemoration was well attended with some in period dress.  Wreaths were laid, including one by descendants of one of the men killed on that day. A new information panel was also unveiled on site. 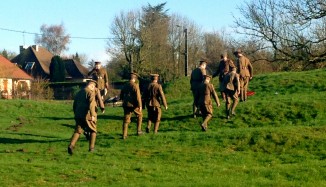 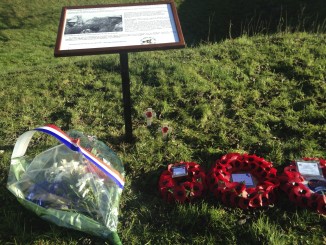 The ballot for tickets to the Thiepval commemoration on 1 July has now closed and applicants have been notified whether they have been successful or not. We know of many disappointed people who did not get tickets, and one or 2 who happily did.

Just a reminder that we are full for key dates in 2016 and booking up fast for the period 1st July to mid November 2016, so please do get in touch with us if you are thinking of planning a visit during the Somme commemoration months. The men we are remembering is what is important, whatever the date.  We get on average an enquiry a day for accommodation for 1 July 2016 and we know of nowhere locally that has accommodation.

We have been advised via a briefing by the Australian Embassy in Paris that plans are well underway for Anzac commemorations for Fromelles and Pozieres. As soon as further information becomes available we will include the detail in our newsletter but we have been urged to direct interested parties to the 2 official websites for DVA and Anzac Centenary.  As soon as new information becomes available, the sites :

will be updated. Further official announcements are expected in December.

On our travels we have noticed that a new structure is being erected at Crucifix Corner on the road between La Boisselle and Aveluy. Our research shows that this will be a contemporary statue inspired by La Nymphe D’Aveluy. The nymph was originally sculpted in the ground by French soldiers (poilus) in 1915 and was given the name by them of  La Nymphe D’Aveluy. The photo shows how the sculpture looked. We do not know what the modern sculpture will look like but we captured the work underway. We will keep you posted. 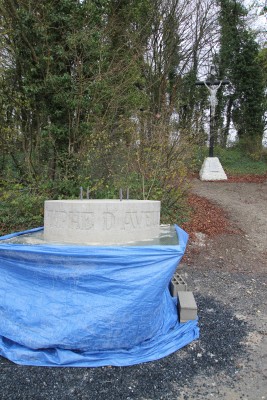 Work in progress for the statue 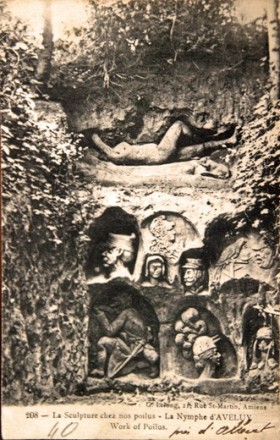 Last week we travelled to Normandy for a short break and to visit another area of France we have come to love with its wonderful countryside, coastline and of course the history. There is too much to write about here on our experiences in Normandy, but one place stays in our minds from our short visit. Away from the D Day beaches, behind the Bayeux Memorial to The Missing, lies another memorial a little off the beaten track but easy to find. We were told about it by guests of ours who had visited. It is a Memorial to the Reporters and War Correspondents. In a secluded garden, on stone panels, each stone a separate year, the names of those who have died from 1944 to the present day are inscribed. From those reporters who covered the D Dday landings to Robert Cappa and latterly those like James Foley, and Charb (Charlie Hebdo) who died as a result of terrorism are all remembered here. It is well worth a visit and time for reflection if you are visiting Bayeux. 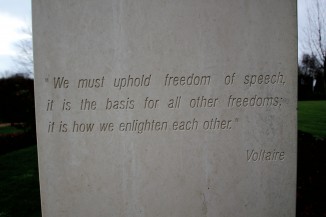 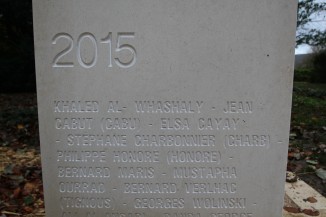 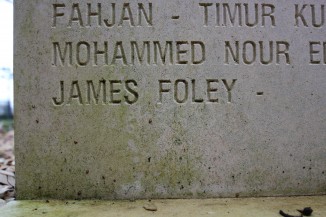 Well, the chickens have been spoiled by a mild autumn so far but the recent change to cold, wet weather is not appreciated by our hens. With the nights drawing in they are now safely tucked up in bed by 5.30pm. The girls are still laying regularly so not yet too distressed by the winter weather. Guests have sent us ideas for knitting woolly tank tops for the girls and we have seen hi viz vests available for chickens, but we think their plumage is serving them well at the moment. Oh, and David would not be amused if we put woolly vests on the chickens. They do have a NASA inspired thermal cover for their coop when it really does get cold. What do you think of hi viz vests? 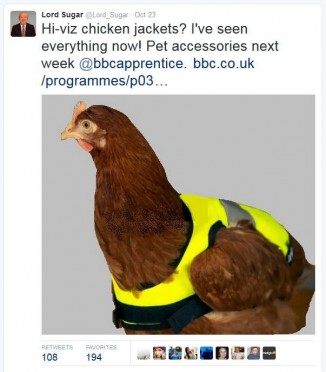 Your newsletters are great and I really enjoy reading them and catching up with the news. Last year, the November 11 ceremonies in La Boisselle were attended by a large number of locals. Was it the same this year? In a couple of months I'm giving a talk on battlefield tourism and remembrance and I would very much appreciate it if you could kindly fill me in on this. Very many thanks.

Great to hear your news. Keep it coming.

When we were in bayeux we too found the memorials to the journalists and photographers. We found it our first day and it colored our whole experience as we visited the beaches. Brave men just like all the servicemen. Thanks for the reminder

Sydney yesterday reached 38C as we say warm. Our 1st day of summer it's going to be hot few months. Off to UK January to put the final touches to the re-enactment of what was the Naval African Expedition of 1915-16. Over 3,400 miles with two gun boats, Cape Town to Lake Tanganyika, hauling the boats via train then oxen cart and sailing and lifting them through the shallows on the rivers used. Lead by Lt Cmdr Geoffrey Basil Spicer-Simon and just 28 men in total. They took on the German Navy and won, sinking their two armed patrol boats, Kingani & Hedwig von Wissman. An amazing feat when the war on the Western Front wasn't going at all well. The RN boats were known as HMS Mimi & Toutou a story that has to be retold so history will be remembered.

Your recognition and visits to other memorials is most commendable given your busy schedule.
Will be be at the Crater July 1st. Will call in to say Hello. 'Till then ...