The Final 100 Days of the Centenary – August News from no.fifty6

Posted on 31st August 2018 by Julie and David Thomson in General News. 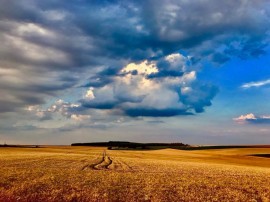 Another busy and varied month here. The weather in August started with the continued scorching dry spell but the second half saw more seasonal norms and finally some rain in the last week. The light for photography capturing this landscape has been beautiful with great sunsets, and the fields around us are nearly all harvested and being made ready for late summer reseeding. Just the tall maize and ubiquitous sugarbeet (betterave) remain in the fields.

From a historical perspective, August 8th marked the start of the Battle of Amiens and the 100 Days Offensive Centenary - then the Battle of Albert and the final actions of the War which led to the Germans being pushed back and leading to the November Armistice.  Our guests have continued to bring their personal stories of family members who sacrificed all in these last months of the War.

We were privileged to be part of the congregation at a special service of commemoration in Amiens Cathedral on 8th August in the presence of William, Duke of Cambridge and British Prime Minister Theresa May.

This unique service, which included contributions from Britain, the Commonwealth Nations, France and Germany, commemorated those who fought in the 100 Days Offensive. William gave a wonderful Address.  The armed forces personnel from all nations who read from diaries and letters as well as hauntingly beautiful music from the band and choir in this most special cathedral was a very special occasion for us which seemed to hit exactly the right note. Children laid wreaths at the memorial stones in the cathedral and there was time for reflection. Prince William is taller and slimmer than you would imagine and had an easy air about him. We were impressed. Tim and Leisa Corcoran, our guests, were also at the service, invited by the Australian Embassy and Tim said the service was one of the highlights of his life. It really was a special event. 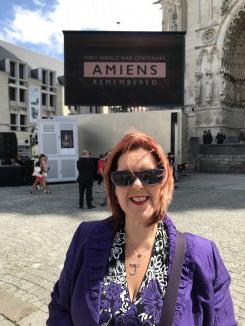 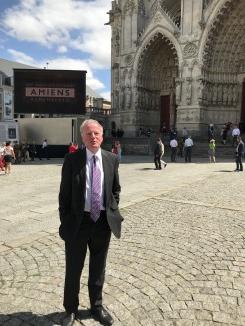 Through the month we have been remembering those who gave so much in these final months of the War. The 1918 battles are not widely known compared to 1916, but this is a hugely important period of the war, - fast moving, new tactics, heroic stands, huge distances covered in single days rather than the attrition of 1916. Still bloody, uncompromising and leading to many wounded and killed, but the end of the war was in sight…

Tim and Leisa from South Australia, as well as attending Amiens 100, paid personal tribute to their family members involved in the war including Thomas Patrick Shannon who is buried in Courcelette Cemetery having died at Mouquet Farm 16 August 1916.  Having visited before in 2015 this visit meant a lot to Tim and Leisa as they had been able to use the intervening 3 years to discover more about their ancestors who fought here.

Bev and Martyn Lee (who we know from the Triumph Motorcycle Club who stay with us) made a return visit with Bev’s lovely dad Geoff. Geoff talked about his father who served in the war  - he had told Geoff stories of when he played in goal for the army football team at Noeux Les Mines, just north of here. Stories that are being passed through the generations, the mantle of remembrance being passed on.

On 8th August we also welcomed 6 cycling friends who were cycling the Western Front. Jan, Tony, Caroline, Nigel, Tish and Gary cycled in all weathers. While they were here we were able to help with research into their family members who served in The Great War, including Caroline’s grandfather William Henry Hunn who served with the Royal Garrison Artillery and was injured and had part of his leg amputated.  Gary’s ancestor, John Ascott Peagam who served for 5 years with the RFA, Jan’s relatives Arthur Kettle who served with the Worcester Regiment and RFA and AR Dixon, Sapper with the Royal Engineers. Each a life. Each someone’s memory. Chatting over a glass of wine, memories were shared, records pored over and the lives of the gentlemen who served and families they left behind came to life. This is why we love doing what we do. To reconnect with the past in such a way is a privilege.

Ann Boxall from Suffolk had been planning her trip to the fields of France for a long time. She knew she wanted to be at the graveside of her Great Aunt’s first husband, Robert Newlyn Shandley on the Centenary of his death on 22ndAugust 2018. Ann from Suffolk remembers her Great Aunt fondly. Though Robert was not a relative, Ann says that if he had not died she would not be here – her parents met through her Great Aunt Annie Dorothy and Ann is named for her.  Robert Shandley was a schoolmaster before the War at New City Road Elementary School in West Ham. He joined up as a Private early in the War. He rose through the ranks and was commissioned to the rank of Second Lieutenant where he led men in the 9thEssex Regiment. On 22ndAugust 1918 his Regiment went over the top near Morlancourt advancing on the German lines on the Bray-Meaulte Road. Here, somewhere as he led his men, Robert was killed. He was buried on the battlefield with his fellow men from the Essex and Cambridge Regiments who fought alongside each other. After the Armistice his battlefield grave was concentrated in to beautiful Beacon Cemetery. Ann, with her friends and David in attendance, carried out a service of remembrance at Robert’s grave. She was touched by the beauty of the place. Robert is buried under a beautiful tree. One of the photos she has of Robert is of him and his beloved wife standing in a garden somewhere – under a tree. Robert’s family continued to be struck by tragedy. His father died in the mid 1920s. Two of his sisters, both also school teachers lived with their mother in East London and all 3 were killed in a direct bomb hit during the Blitz. The Shandley name has therefore died out but it is good to know Robert is not forgotten in his corner of a foreign field. 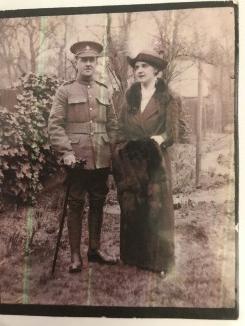 Susan Hughes and her cousin Dilys Calder have also been planning their pilgrimage for some time. They came with their husbands John and Stuart to follow in the footsteps of their relative Christmas Jacob Rees. Young Christmas (born on Christmas Day 1899) enlisted with the Denbigh Hussars Yeomanry and served with the 16th Battalion of the Royal Welch Fusiliers. He died on 26 August 1918 aged only 18 and is commemorated on the War Memorial in Pentyrch near Cardiff, where his family lived.

Christmas had joined up before, but being under-age was sent back home. However, he enlisted again once he was 18, obviously determined to “do his bit” and follow his older brother Edgar, who had seen active service in France as a gunner with the Royal Artillery. Early on the morning of 26 August 1918 the Royal Welch Fusiliers started their attack at Mametz Wood, the scene of so much Welsh bloodshed two years earlier. From Mametz they fought on through Bazentin to try and clear the Germans from Longueval. It was in this attack that Christmas was killed. David was able to show Susan and Dilys the line of the advance that Christmas and his mates would have traversed, and bring to life the events of the day.  He was taken to the Red Dragon Cemetery, the burial ground for The Royal Welsh which was situated in Mash Valley between Ovillers and La Boisselle. After the Armistice, Red Dragon was concentrated into Ovillers Military Cemetery where Christmas now lies buried.

Susan brought with her a postcard showing scenes of Albert, written by her grandmother, Christmas’s sister, who had visited the grave in 1966 along with two of her surviving brothers, Edgar and Dilys’s father Glyn. Susan and Dilys fulfilled a long-held wish by visiting Christmas’s grave on the 100th anniversary of the day he died. They planted a red rose, as the survivors of the family had done more than 50 years before. 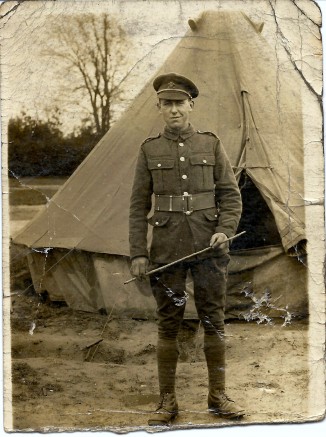 People come from all parts of the world and remembrance and knowledge sharing is at the heart of everything we do here. For all the fallen, we will remember them.

We are fully booked for the weekend of November 11th though we have not yet seen any information about any special commemorations or security arrangements for the Centenary of The Armistice in this area – but there are always ceremonies here on that day.

The lovely Richard Chandler of Fir Tree Maps http://www.firtreemaps.com visited us last month to bring fresh stocks of his wonderful Somme and Ypres Maps.  Richard is an artist and his painstaking work to create such accurate maps of the Somme and Ypres Battlefield areas is without equal. So, thank you for your craft Richard- your maps are very popular with our guests – not only useful but beautiful to look at. It is always a pleasure to see you particularly with your lovely wife and Scamp the dog. 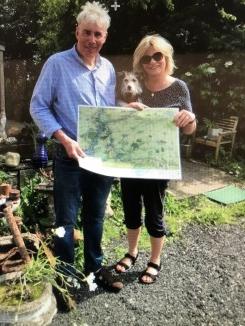 Cooler temperatures = happier bunnies and hens though during the hot spell frozen water bottles and frequent dust baths were the order of the day.  The hens have established their own personalities – they are funny, rushing over to whoever goes to see them in the garden in the hope of a tidbit of something. And for those staying in The Senna Room, Harriet is likely to jump up on to your windowsill to see what you are up to. She loves a chat. Oh yes – and 6 eggs a day find their way to our breakfast table each morning. 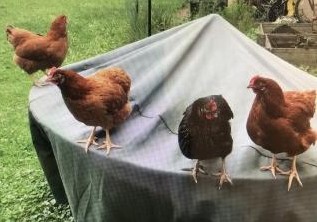 Another great newsletter with so many great memories and stories. Hope to see you again in 2019.

Another year, another wonderful stay at No 56. Thank you again for making it so special for us, your hospitality is second to none! With Julie's super meals eaten in your lovely new dining room, plus great company what more could we have wanted. Hope to see you again next year!

Nearly there then - 11/11/18 #2. Best Wishes with whatever you end up doing. Met the Ayshire ‘connection’ (whose connection with the CWGC confirmed ‘don’t leave emotionally precious artefacts at headstones’) but, realistically, no further on so it’s looking forward to the next visit (not second week in Nov ..!). Luv to you both.

It's always about the stories. thank you so much

You always put through great and poignant stories ...

What a lot of lovely and interesting memories I have missed joining in. I'd have loved to have been in Amiens Cathedral for instance for the concert you mention. Anyway, I shall hear all about it when Wes, Trudie, Alan & Sharon return tomorrow. I understand they were going to Albert underground passages yesterday. I thought that was absolutely mind blowing. Best wishes. I must try to come over again oneday. Kathy Smyth

Thank you for another newsletter. I so enjoy receiving them especially a few days before I get to make my first stay at Number56! Looking forward to meeting you.

Good to see you - appreciate you posting my cards. Ann and Dave appreciated your kind words

Once again Thanks Julie for a wonderful news letter. As always. Makes us feel part of Number 56 even if we are not there with you. Love to both, girls and buns. x